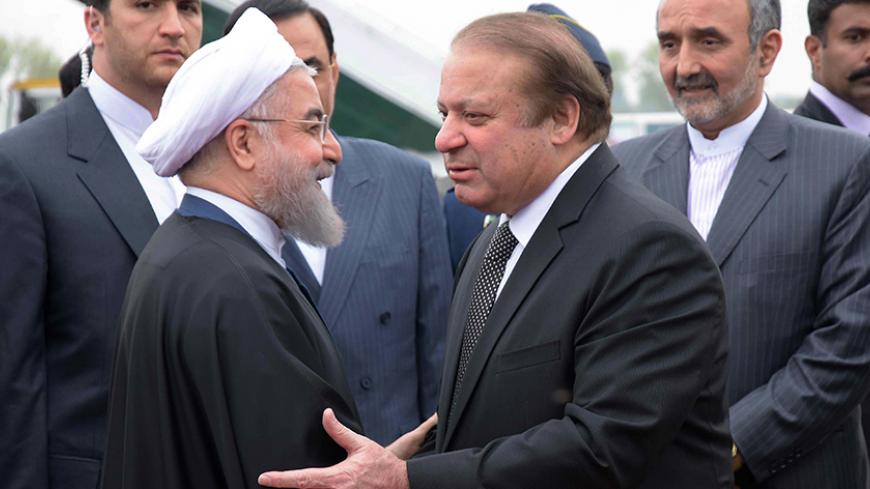 President Hassan Rouhani’s first foreign trip of the Iranian New Year was a two-day trip to Pakistan, which began March 25. While he was accompanied by a half-dozen ministers and high-ranking officials, there has been recent criticism that the trip ended without significant tangible achievements, prompting officials from the administration to answer back.

A March 29 article from the Islamic Republic News Agency (IRNA), which operates under the administration, accused domestic media of parroting foreign media in their critiques of Rouhani’s trip. The article asserts that on the first day of the visit, Iran and Pakistan signed six documents of cooperation, including cooperation between chambers of commerce and also in the fields of universities, culture, insurance and health. According to the IRNA article, there were also discussions of strengthening trade on the border markets and between the Chabahar and Gwadar ports.

The article also addressed one of the most lingering issues between the two countries — the so-called “peace pipeline” that is supposed to deliver Iranian gas to Pakistan. Iran has completed the pipeline on its side of the border, but the creation of the pipeline in Pakistan has been plagued by continuous delays. According to the article, Pakistani officials have been pressured by Saudi and American officials to not pursue the Iran-Pakistan pipeline due to international sanctions on Iran and replace it with a pipeline from Turkmenistan through Afghanistan. IRNA contends that these alternatives sacrifice the energy needs of more than 180 million people for the desires of foreign countries. The article also maintains that despite attempts by “anti-Iranian media” to present obstacles to the pipeline, Pakistani officials are well-aware that their rival India has already proposed a pipeline through the sea.

Despite American and Saudi pressure to reject economic and security cooperation with Iran, Pakistani leaders have always shown their good intentions, claimed the IRNA article. The article continued that Pakistani leaders, including Prime Minister Nawaz Sharif, despite pressure from Saudi Arabia, which gives the country considerable aid, has been able to successfully balance relations between the two regional rivals, Iran and Saudi Arabia. The article concluded that important mutual interests and goals between Iran and Pakistan cannot be “overshadowed by propaganda.”

While the IRNA article did not reference specific articles that questioned the outcome of Rouhani’s trip, other media did. “Unfortunately, the achievements of this trip are affected by the propaganda of Saudi and Zionist stations and websites,” said Rouhani adviser Hesam al-Din Ashna March 28 in reference to the London-based BBC Persian article headlined “Rouhani’s fruitless trip to Pakistan.”

The BBC article asserted that despite Rouhani traveling to Pakistan with a large delegation, he “returned empty-handed” due to China’s heavy economic influence and American and Saudi objections. The head of Iran’s central bank, the governor of Sistan-Baluchistan province, and the foreign, interior, industry, energy and health ministers accompanied Rouhani on the trip.

Perhaps in response to the ongoing criticism, on March 29 Fars News interviewed Pakistani parliamentarian Shafaghat Yarkhan, who belongs to Sharif’s Muslim League party. According to Yarkhan, the media who said Rouhani’s trip was unproductive were biased. He said, “The achievements of Rouhani’s trip to Pakistan are undeniable, and in the future we will see the positive results of this trip.” Yarkhan also said that while the peace pipeline may take time, he was certain that trade between the two countries would increase.