The rise of Islamic State sleeper cells in Baghdad

After the recent attacks by the Islamic State around Baghdad, Iraqi security forces are struggling to track down IS cells in the Iraqi capital's outskirts. 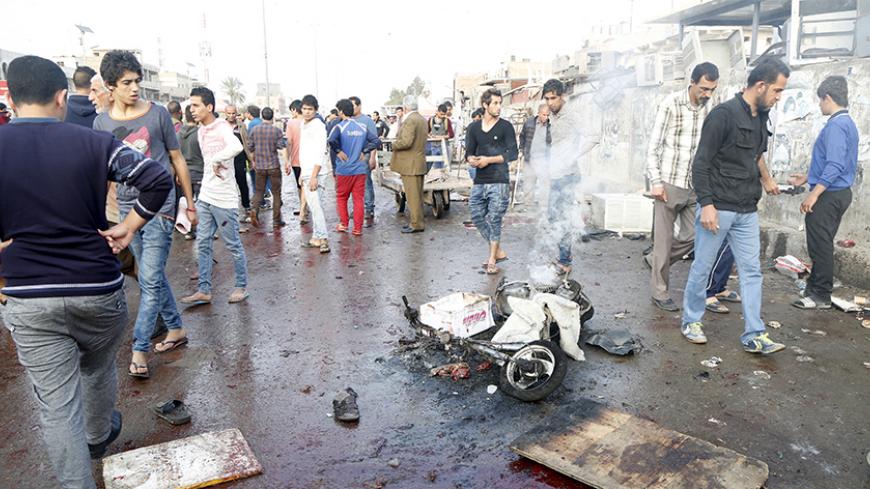 People gather at the site of suicide blasts by bombers affiliated with IS in Baghdad's Sadr City, Feb. 28, 2016. - REUTERS/Wissm al-Okili

BAGHDAD — On Feb. 28, the Islamic State (IS) attacked the headquarters of the Iraqi army’s 22nd Brigade in Abu Ghraib city, west of Baghdad, killing 13 soldiers. The Iraqi security forces and the Popular Mobilization Units supporting them killed the attackers and took control of the situation.

On the same day, two suicide bombers affiliated with IS attacked a public market in Sadr City, east of Baghdad, killing 70 people and wounding more than 100 others.

It seems the two attacks were coordinated in their pursuit of media and political objectives. On Feb. 29, IS published photos showing the attack of its militants on the 22nd Brigade headquarters as well as the battle that was raging only 15 kilometers (9 miles) from Baghdad International Airport, where Iraqi security forces were deployed.

On that tragic day, Iraqi Prime Minister Haider al-Abadi visited the explosion sites in Sadr City, and his press office issued a statement reading, “After the criminal IS was defeated several times thanks to our heroic fighters, it targeted innocent civilians when it failed to confront the army. Its remnants ran away from the battlefields before the eyes of the ardent fighters.

“Targeting Al-Rasool al-Azam Mosque in Shuala city, north of Baghdad, on Feb. 25 and Maridi market in Sadr City three days later will not stand in our way. It will only increase the willingness and insistence of the army heroes, security apparatus and Popular Mobilization Units on cleansing the Iraqi cities and lands from the evil of terrorism. Their foiling of the attack on Silo Khan Dari and killing of terrorists proves this.”

This statement discussed other IS operations against Iraqi security forces within a short period and explored the security breaches by this organization. Critical to understanding the security of Baghdad and the surrounding regions, there are six regions surrounding the capital from the north, west and southwest, forming what is known as the “Baghdad Belt.”

These regions are Latifiya, Taji, al-Mushahada, al-Tarmia, Arab Jibor and al-Mada’in, and they are mostly Sunni and considered “fertile terrorist soil,” according to the deputy head of the security committee in Baghdad’s provincial council, Saad al-Matlabi. He told Al-Monitor the areas lie along the borders with the Iraqi provinces of Salahuddin, Diyala and Anbar, where huge battles are still raging between Iraqi security forces and the Popular Mobilization Units against IS.

Despite the constant reinforcement and the security plans for the Baghdad Belt, 30 IS fighters managed to reach Abu Ghraib city on the capital’s outskirts and kill 13 Iraqi soldiers.

A few days before this incident, the security forces decided to build a wall and set up new checkpoints around Baghdad, but the parliamentary Sunni blocs rejected this decision and dismissed it as an attempt to cause a rift.

Matlabi said, “IS members in these areas are positioned in Taji, al-Taramia and al-Mushahada as well as in Abu Ghraib, adjacent to al-Karma, which is part of Anbar.” He noted, “There is fertile terrorist soil in Latifiya, south of Baghdad, and these areas sympathize with IS. But political opposition claiming to defend Sunnis is preventing the Iraqi security forces and the Popular Mobilization Units from cleansing these regions. There is also pressure from blocs that claim to be Sunni affiliated in order to enter some regions with the displaced."

Iskander Watut, a member of the Iraqi parliament's defense and security committee, described the security situation on the outskirts of Baghdad as “bad, especially after the recent IS attacks in the Baghdad suburb of Abu Ghraib.” He told Al-Monitor, “The Baghdad Operations Command must develop new security plans and cleanse the outskirts of the capital from the remaining members of the terrorist organizations.”

Watut added, “IS seeks to repeat its attacks, but pre-emptive operations must be carried out to prevent it from reaching its target location. This cannot be achieved without intensified intelligence efforts from the Iraqi security forces.”

Amir al-Saadi, a writer and political analyst focusing on security and strategic affairs, told Al-Monitor, “The functional structure of the Iraqi security system suffers from a significant imbalance, especially as the project to install surveillance cameras remains unfinished. This is in addition to the lack of hot air balloons and planes allowing the intelligence system to track any suspicious movements on the outskirts of Baghdad and inside it.”

Saadi added, “The Baghdad Operations Command cannot guarantee the security situation in the capital by building a wall around the city, since anyone can manufacture an explosive device made from materials available in the local Iraqi market. The leadership of the security services and the administrations’ plans and strategies are weak. They often address violations after they happen, reacting to them instead of passing laws to avoid these security breaches in the first place.”

The repeated IS attacks on Baghdad, especially in Shiite areas, confirm the existence of sleeper cells that commit random suicide attacks and use car bombs to target civilians. They seem to be avoiding confrontation with the Iraqi security forces in Baghdad as they try to maintain a presence in the capital.

Abadi has not issued any new statement or stance regarding the attacks in Baghdad, the last of which happened on Feb. 28. The government has not taken any new measures on the capital’s western outskirts, where the attack occurred.