Even if Iran considers Yemen as an opportunity to expand its influence, it views averting the crisis there at hand is more important than directly entering it. 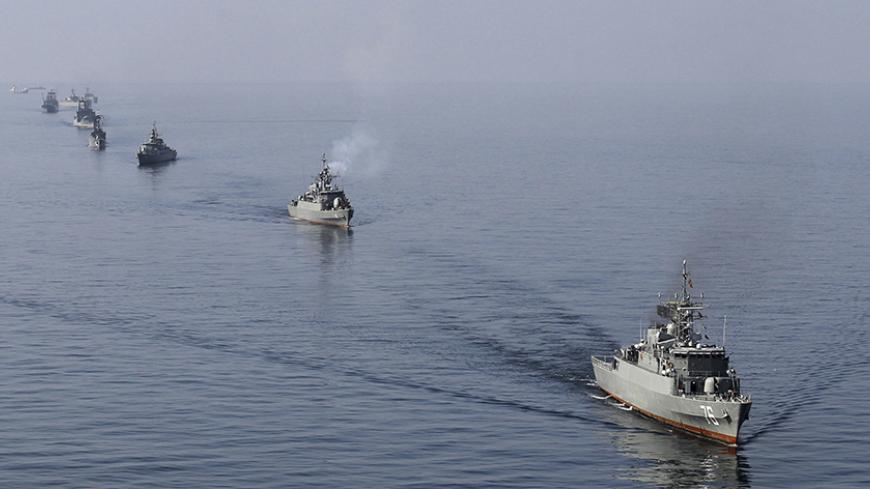 Iranian naval ships take part in a naval parade on the last day of the Velayat-90 war game in the Sea of Oman near the Strait of Hormuz in southern Iran, Jan. 3, 2012. - REUTERS/Ebrahim Norouzi

For nearly a year now, Saudi Arabia has been bombarding its southern neighbor, Yemen, while diverting the world’s attention toward Iran. Saudi military forces invaded Bahrain using this very tactic and have been aiding extremist forces in Syria and Iraq, all while pointing the finger at the Islamic Republic.

With the help of its extensive media machine, Riyadh has continued to push the line that it is engaged in a “confrontation” with Iran, and still finds an audience for this message in the West, regardless of its own actions. This same media machine is now using passing remarks on developments in the Middle East by Ali Akbar Velayati, foreign policy advisor to Iran’s supreme leader, as a pretext to accuse Tehran of having military intentions in regards to Yemen. Speaking before reporters on Feb. 2, Velayati stated in response to a question about the possibility of a Saudi-Turkish ground operation in Syria that the Saudis “can’t do more than what they have done in Yemen. They have used all of their capabilities and still haven’t been successful." He added, “Which force does Saudi Arabia have that it has kept behind the scene and which it hasn’t used? If it has such a force, it should use it so as to not lose face in Yemen.” However, the one remark by Velayati that caused a stir in Arab media was the comment that "the domain of cooperation between Iran and Russia [extends to] Iraq [and] Lebanon, and I predict that in the future it will also include Yemen."

The ruckus about Velayati’s remarks aside, Iran has repeatedly showed that it has no desire for a military campaign in Yemen for six main reasons.

First, maintaining the status quo for Iran is more important than seeking to obtain a more favorable situation. The first rule of investment is to protect your assets before you can rely on them and make a profit. Hence, for Iran — which has seen its position, and that of its allies, being constantly challenged by the threat of terrorism emanating from Syria and Iraq — exploring a new realm such as Yemen is not a priority.

Second, Iran has learned through history that overstretching one’s presence in different regions will lead to a state collapse. Tehran is aware of its strategic capabilities and knows that overstretching its presence in the region by, for instance, engaging in military action in Yemen, can obliterate its current status while having no positive influence on its strategic power in regards to other matters in the Middle East.

Third, given the regional threats to Iran’s national security, the fight against extremism has been made a priority in the country’s foreign policy. President Hassan Rouhani and Foreign Minister Mohammad Javad Zarif have used every opportunity to highlight this priority. In their view, following the conclusion of the Joint Comprehensive Plan of Action, there is no bigger challenge facing the country than regional terrorism, and especially the Islamic State, which by targeting Tehran’s regional allies had begun to come close to Iran’s western borders. Therefore, even if one considers Yemen as an opportunity for Iran, averting the crisis there at hand is more important than directly entering it.

Fourth, the Rouhani administration is of the belief that improving Iran’s regional and international standing begins through responsible actions. A military attack on Yemen can in no way be viewed as responsible. In fact, such a move will only aid in covering up Saudi Arabia’s irresponsible action in attacking the country. Iran learned this lesson when a group of youths earlier this year attacked the Saudi Embassy in Tehran, l only to see their actions lead to a halt in the regional and international outcry over Riyadh’s execution of dissidents. Iran does not want to give Saudi Arabia the opportunity to free itself from the burden and responsibility of the war in Yemen.

Fifth, Iran will not militarily engage in Yemen because it will confirm the line touted by Saudi Arabia’s media machine. Riyadh has tried hard to create a regional consensus against Tehran by increasing Iranophobia. Any military action by Iran against Yemen will thus not only aid Riyadh in its anti-Iran campaign, but also divert global attention away from the Saudi-led war on Yemen — especially at a time when the international community is starting to take notice of the developments there.

Sixth, Iran and its allies know that Yemen is not in need of manpower but more than anything needs fighter jets, medium- and long-range missiles, helicopters and heavy military equipment. Iran would never provide for these needs, assuming that it has the means to do so, for two main reasons. First and foremost, it would endanger the nuclear agreement it signed with the six world powers, and second, it would place Iran in direct confrontation with Saudi Arabia. Neither of these two outcomes would be desirable for Iran. After resolving the nuclear issue, Tehran’s goal is to alleviate its economic problems and deal with the threat of regional extremism. Thus, entering the war in Yemen will not aid Iran in achieving either of these two objectives.

Still, the international community has been somewhat inattentive to this war, perhaps because Yemen is far from the European Union and the West, and can’t trigger situations such as the current refugee crisis emanating from Syria. Or perhaps, because of its media machine and petrodollars, Saudi influence is still effective in Western societies. However, neither of these two factors have an effect on Iran, which has never skipped an opportunity to increase international pressure on its Saudi rivals. Thus, if anything, the remarks made by Velayati or other Iranian officials merely point to Tehran’s attempts to bring global attention to the Saudi-led war in Yemen and its dire consequences.