The ongoing conflict between Iran and Saudi Arabia is affecting the sports world as regional soccer associations struggle to satisfy both parties' location and security demands. 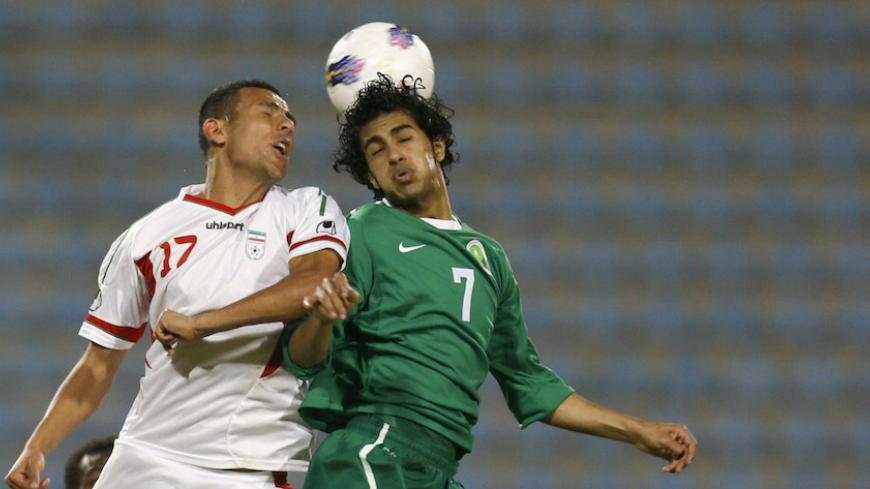 The rising tensions between Iran and Saudi Arabia are spilling out onto the soccer field. First in the media, and later in a letter to the Asian Football Confederation (AFC), Saudi officials have asked for games between Iranian and Saudi teams to be held at a neutral venue. Iranian officials have meanwhile emphasized that they will not accept the latter. The AFC has announced that it will issue its final verdict on the matter on March 15, and that if the disagreement is not solved before then, games will take place at a neutral venue.

So far, both sides have been satisfied with the AFC’s decision. Iran constantly emphasizes the importance of separating soccer from politics.

The first time Iran was prevented from hosting a soccer game was during the 1986 World Cup qualifiers. Then, FIFA refused to allow Iran to host, as it was engaged in war with Iraq. FIFA suggested that the game be played in a third country, but Iran refused and thus pulled out of the competition. During the 1988 Seoul Olympics qualifiers, Iran was once again prevented from hosting a game since it was still engaged in war with Iraq. This time, however, Iran agreed to face off against Kuwait at a neutral venue.

The Saudis are refusing to travel to Iran because they don’t believe that the Islamic Republic can guarantee the safety of their athletes. Of note, Saudi Arabia cut ties with Iran after its diplomatic compounds in Tehran and Mashhad were attacked by protesters. Those demonstrations were triggered by Riyadh’s execution of dissident Shiite cleric Sheikh Nimr al-Nimr.

In an interview with Al-Monitor, former AFC Legal Committee member Ahmad Reza Barati emphasized the importance of separating sports from politics and called Iran one of the most stable countries in the region. Barati told Al-Monitor, “Iran has had political problems with the United States for many years, but we never allowed these problems to influence our athletic relations with them. Our athletic exchanges with them have always been peaceful and secure. The fact that Iran has hosted important regional and international competitions is a clear sign that Iran is completely secure. Iraq, Syria and Afghanistan [have] had their sport events hosted in Iran because of their own domestic situations.”

Unlike the media and officials of Saudi Arabia, Iranian media and some Iranian soccer officials have criticized the AFC’s conduct and the way Iran’s Football Federation has handled the issue.

“AFC’s position is closer to that of the Saudis, and the recent verdict is also meant to make the Saudis happy. We should consider our own national interests instead of thinking about satisfying a third person,” Abbas Torabian, former head of the Foreign Relations Committee of Iran’s Football Federation, told Al-Monitor. He believes that soccer in Saudi Arabia is influenced by politics, saying. “Football officials in Saudi Arabia do not make any move without considering their country’s political policies. During the past few days, there have been no signs that they are looking to solve this problem.”

Meanwhile, Barati told Al-Monitor that he believes that “the AFC is looking to solve this issue peacefully, with help from officials of both countries. But if it doesn't go as planned, the board of directors as well as legal organs of the confederation should make a decision in accordance with the constitution and the laws of the confederation.”

According to Barati, the short span between the attacks on Saudi diplomatic facilities and the committee meeting in the AFC did not leave Iranian officials enough time to discuss and examine the legal aspects of the matter. He added to Al-Monitor, “Now, however, they have until March 15. This is a positive development that should be used when negotiating with AFC officials and AFC member countries.”

Mehdi Mohammad Nabi, the former secretary general of the Iranian Football Federation, points to the third paragraph of the AFC and FIFA charter, which prohibits racial discrimination as well as any form of political interference. He argued, “Basically, these requests, which were put forward by Saudi Arabia and the UAE, have no legal bearing and should have been rejected. In fact, the confederation should have even taken legal action against both countries.”

The AFC Executive Committee has so far rescheduled AFC Champions League matches between Iranian and Saudi teams. The league's group-stage games started on Feb. 23, and according to the tournament drawing, Zob Ahan Esfahan, Sepahan and Tractor Sazi from Iran will, in separate groups, compete with Ittihad, Al-Nasr and Al-Hilal of Saudi Arabia.

Torabian, the former head of the Foreign Relations Committee of Iran’s Football Federation, disagrees. He thinks that Qatar is not a good option for Iran, telling Al-Monitor, “We will not choose Qatar. Oman, Lebanon or even the UAE are better choices.”

Amid this controversy, Yousef Serkal, head of the UAE Football Federation, has asked the AFC to “allow Emirati teams to compete with Iran in a neutral venue,” adding, “It is better if Iran is transferred to the East Asian group in order to prevent any possible tension between Iran and Arab countries.” The AFC has rejected the UAE’s request, but has assured the country that it will be more diligent regarding the security situation in Iran. The UAE’s Al Jazira Club and Al-Nasr Dubai are slated to compete with Iran’s Sepahan and Tractor Sazi in the AFC Champions League.

There is much at stake in this controversy. If it’s not resolved, it is unclear how it will affect other athletic competitions between Iran and Saudi Arabia, and especially the 2018 World Cup qualifiers. For now, the secretary-general of the Saudi Football Federation, Ahmed Alkhamis, said, “Not only will our club teams not go to Iran, but our national team will also not be willing to play a match in Iran if we are in the same group with Iran for the 2018 World Cup qualifiers. Not until relations between the two countries have returned to normal will we be willing to be hosted by Iran for a match.”