Why some Palestinians believe that 'death is the solution, not the problem'

Seeing no political will to improve their circumstances, some young Palestinians appear to see killing Israelis as the only way to end the occupation and their misery. 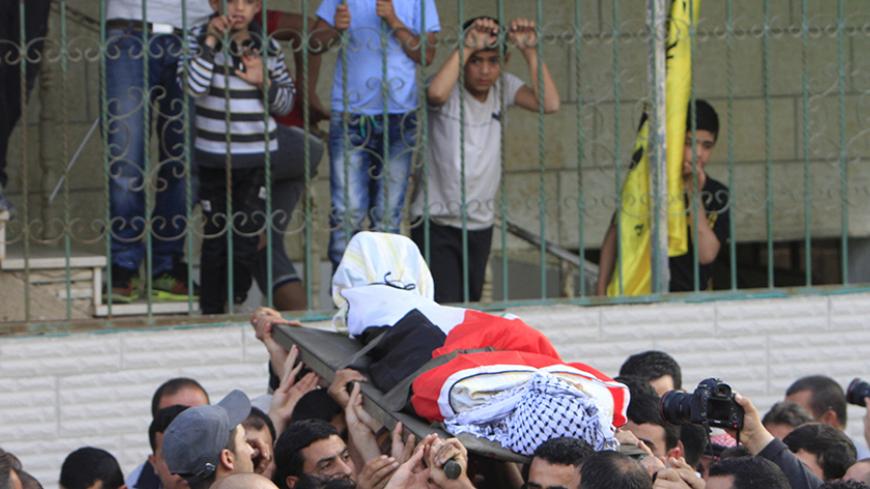 Mourners carry the body of Palestinian Ahmad Aamer, 16, who the Israeli military said was shot dead by Israeli soldiers after he tried to stab them, during his funeral in the West Bank village of Mas'ha near Salfit, Mar. 9, 2016. - REUTERS/Abed Omar Qusini

How is it possible that a country with such a strong army and experienced security service, Shin Bet, is hit with three terror attacks in a single day, as happened March 8, and has no recourse? Barely a week goes by without an Israeli getting stabbed or shot. Demolishing the homes of the attackers’ families does not stop the young attackers. Placing suspected terrorists under administrative detention without trial fails to impress scissor-wielding teenage Palestinian girls. Fear of losing their Israeli work permits is in no way a deterrent to those contemplating murder. The expulsion of families of attackers to the Gaza Strip, as proposed by Prime Minister Benjamin Netanyahu, is likely to stir up trouble with human rights organizations and the Supreme Court. It is only a matter of time before some genius proposes imposing the death penalty on suicide attackers.

The situation reminds me of a story a foreign correspondent covering Operation Cast Lead in early 2009 told me. At the height of the Israeli bombing of Gaza, he noticed an old Palestinian man leisurely strolling through the ruins. When a measure of calm was restored, the journalist approached the man and asked whether he was scared of being hit by a shell. “What do I have left in this life?” the old man responded. “For me, death is the solution, not the problem. That’s how I will finally be rid of all my troubles.”

To understand a young Palestinian man from the West Bank town of Qalqilya who was born under Israeli occupation, continues to live under occupation and has lost all hope of ever being free of occupation, one can refer to the immortal lines from the “Merchant of Venice” (its suspiciously anti-Semitic overtones aside). For the word “Jew,” substitute “Palestinian.” Instead of “Christian,” use “Jew”:

the same food, hurt with the same weapons, subject

to the same diseases, healed by the same means,

warmed and cooled by the same winter and summer, as

a Christian is? If you prick us, do we not bleed?

If you tickle us, do we not laugh? If you poison us,

do we not die? And if you wrong us, shall we not revenge?

The young man from Qalqilya gets up as usual at 4 a.m. so he can get to the Israeli army checkpoint and be on time at the construction site in the central Israeli town of Petah Tikva, where he has found work. He hears, however, that as a result of terror attacks, Israel has closed all access routes to and from the West Bank. He goes back to bed and scans news websites. There he reads that the teachers strike in the government-run schools in the West Bank is entering its fourth week. The teachers are protesting a decision by the Palestinian Authority (PA) to increase pay for its senior officials, whereas a veteran teacher, with a university degree, makes less than $1,000 a month. On another web site it says that Israel has decided to authorize additional construction in the settlement outposts. Then there are reports that as a result of differences among Arab leaders, the king of Morocco has decided not to host this year's Arab League summit. In Syria, Muslims continue to kill Muslims, while in Israel Jews are inciting against Muslims. An extensive survey by Pew has found that every second Jew in Israel supports the expulsion of Israeli Arabs and that only 8% of respondents define themselves as left wing.

To top it all off, in an interview with Al-Monitor, Avigdor Liberman, chairman of Yisrael Beitenu, lashes out at Finance Minister Moshe Kahlon for his decision to transfer NIS 500 million ($127 million) to the PA. He claims the authority uses this money to fund terrorism, to pay stipends to the families of assailants killed in clashes with Israeli security forces, to dole out monthly support to the families of Palestinians jailed in Israel for security-related offenses and to cover the legal defense of terrorists. Half a billion shekels is a lot of money. The man who for many years served as foreign minister and a member of the diplomacy and defense affairs cabinet obviously knows whereof he speaks. There is little doubt that Liberman, being from the West Bank settlement of Nokdim, closely monitors the economy of the territories.

In case he missed some of the relevant data, here are some select figures from World Bank annual reports of the past two years concerning the economy of the West Bank and what could transpire if the PA were given access to economic activity in Area C, the 61% of the West Bank under total Israeli control:

What is the United States doing to correct this distortion? After all, it was a witness to the Oslo Accord, where the idea of excluding the Palestinians from 61% of the West Bank originated. True, an election year in the United States is not conducive to peace talks or optimal for a confrontation over the authorization of settlement outposts, but is it the time to invite Netanyahu to another meeting with President Barack Obama to show that everything is business as usual — and then, as the Americans did, complain that Netanyahu rejected a White House visit with the dubious excuse of not wanting to interfere in the election campaign? The Americans must now console themselves with a photo of a smiling Netanyahu and his wife, Sara, with Vice President Joe Biden and his wife, Jill, on a visit to Jerusalem March 9.

Who said the occupation isolates Israel on the world stage? Netanyahu can feel justified when on March 6 he derided members of the opposition who criticize the government’s policy of occupation and its inaction. The problem, however, is the desperate young man from Qalqilya who starts thinking that maybe the imam is right when he says that the only way to end the occupation is to kill Jews all the way to the Garden of Eden.