The recent deaths of three Palestinian men in Hebron has sparked a local debate on the presence of Salafist jihadism in the West Bank. 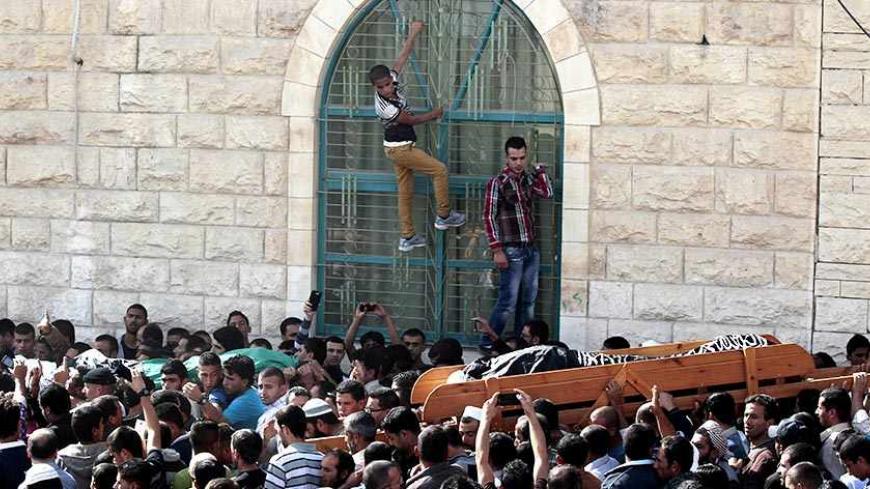 Boys hold onto window bars as the bodies of Palestinian Moussa Makhamreh (R) and Mahmoud Najjar are carried during their funeral in the West Bank village of Yatta, near Hebron, Nov. 27, 2013. - REUTERS/Ammar Awad

RAMALLAH, West Bank — When Israeli occupation forces assassinated three young men in the southern West Bank city of Hebron on the evening of Nov. 26, Israeli and Palestinian security sources agreed that they were members of a Salafist jihadist cell, which West Bank Palestinians had never known existed.

At the funerals of Mohammed Nairoukh, Mahmoud Najjar and Moussa Makhamreh in Hebron and the neighboring town of Yatta, Nairoukh's coffin was draped in Hamas’ flag, while black banners of the Salafist movement fluttered above and draped the bodies of the other two men. This was taken as a clear indication that they were members of the Salafist jihadist movement, though the existence of such a movement remained the subject of heated debate among locals.

Statements by Palestinian security sources, along with their affirmation that they had launched a security campaign targeting “Salafist jihadist” groups and arrested 22 people as a result, settled the debate in favor of the presence of such groups, even if their actual capabilities, armament and numbers were still unknown.

The Mujahedeen Shura Council also announced, following the assassination of the three young men in Hebron, that it had commenced its military operations in the West Bank. It confirmed in a communique that the eliminated cell was but the tip of the iceberg. A person knowledgeable in Salafist affairs who requested anonymity told Al-Monitor that the statement made use of non-jihadist expressions, such as “fearless” and “lionhearted,” which prove that it is a “fabrication.” Palestinian security sources later stated that Nairoukh headed the group assassinated by Israeli occupation forces and had recently begun organizing armed groups and preparing to launch attacks.

Nairoukh was pursued by Palestinian security agencies, escaping from them every time they managed to apprehend him. The latest such incident occurred two weeks before he died, when security forces raided the Nairoukh solar heater factory where he worked. Once captured, he asked for permission to change his clothes, only to escape through an emergency exit. He then became a wanted man until he died along with his two comrades, as one of his friends recounted to Al-Monitor.

Nairoukh's brother, Obeida, confirmed to the Al-Watan news agency that Mohammed had joined a jihadist organization four years ago, when he was jailed by occupation forces for being a member of Hamas. Nairoukh’s wife and the mother to his only child held the Palestinian Authority (PA) responsible for the death of her husband, whom it pursued, having confiscated a photograph of him from their home to better track him. A friend affirmed that during his seven-year imprisonment in Israeli jails, Nairoukh, who had not completed his university studies, memorized the Quran in its entirety as well as 6,000 hadiths (deeds and sayings of the Prophet Muhammad).

The spokesman for the Palestinian security agencies, Maj. Gen. Adnan al-Daeiri, despite not giving Palestinian media any statements pertaining to the security campaign, wrote on his Facebook profile on Dec. 3 that occupation authorities had blown the incident in the West Bank out of proportion.

“Occupation forces are submitting media accounts that they have marketed around the world about the presence of al-Qaeda and Salafist jihadists in Palestine. In these reports, they convey a message to the world that these jihadists are highly capable terrorists, requiring that they continue entering into Palestinian cities,” he relayed.

Khaled Amairah, a journalist and expert in Islamic movements and the Arab-Israeli conflict spoke with Al-Monitor by phone. “Jihadist groups in Gaza have succeeded in establishing a Salafist jihadist nucleus in the West Bank. We don’t know whether this presence is armed or not, or whether its activities are confined to recruiting supporters of jihadist ideals,” he said.

It is worth noting that the families of the vast majority of young men detained by Palestinian security agencies declined to comment or give information about the circumstances under which their loved ones were arrested, refusing to go into the matter with the media.

One of those arrested was Khaled Daoud. His brother, who is from Qalqilya in the northern West Bank, told Al-Monitor that Daoud was arrested by Palestinian security forces on Nov. 26, only to be released two days later. His freedom was short-lived, however, as he was again apprehended by Israeli occupation forces on Nov. 29.

Daoud, like many who were arrested by the PA in its anti-jihadist campaign, is in his 20s and was never able to complete his education. He is unemployed and was previously arrested by occupation forces and the PA on charges of belonging to Hamas or Islamic Jihad.

Salafist jihadists in the West Bank face two main foes: the PA, which sees in them an enemy that advocates violence and calls for its ouster, and the Israeli occupation, which considers them “terrorists” who must be eradicated. Their enemies in the Gaza Strip also include Hamas, which considers the Salafist jihadist movement to be Islamist but not in proper adherence to Sharia.

Palestinians characterize people as Salafists as any bearded religious man who wears a dishdasha (a short robe), pants and a skullcap. The Salafist movement has a notable presence in the West Bank, but, as one of their elders in Qalqilya told Al-Monitor, “The media must differentiate between Salafists and Salafist jihadists. Confusing the two is dangerous.” By this, he meant that Salafism does not espouse violence or the bearing of arms, but calls for the verbatim adherence to the teachings of Islam, in contrast to the Salafist jihadist movement, the ideology of which is inspired by al-Qaeda.

Journalist Amairah opined that the situation in the West Bank facilitated the establishment of such cells, due to circumstances that lay a suitable groundwork for their growth. “These include prevailing political conditions; the West Bank is like a powder keg on the verge of exploding as a result of the faltering peace process. Further, the PA has attempted to take on the role of a police state even though it lacks a state. Most important has been the devastating economic crisis the West Bank has been enduring. Finally, the almost total marginalization of Hamas in the West Bank has spurred the rise of these movements,” he elaborated.

“For these factions, the only avenue for qualitatively improving the aforementioned conditions, is incitement toward jihadism,” Amairah concluded.

One well-known Salafist elder in Nablus refused to comment about the subject as a whole. “If you want to ask me about religious matters or fatwas, I shall answer. I will not talk politics, however,” he told Al-Monitor.

A political analyst and professor of the Palestinian cause at al-Quds Open University in Hebron, Assad al-Ouweiwi, spoke with Al-Monitor on the phone and said, "There most probably is no Salafist jihadist movement in the West Bank, but a limited number of individuals. The concern, however, is that these individuals may spur a larger movement.”