The catastrophic humanitarian situation in Yemen’s besieged Taiz calls for immediate action to lift the siege that has strangled the city for almost a year. 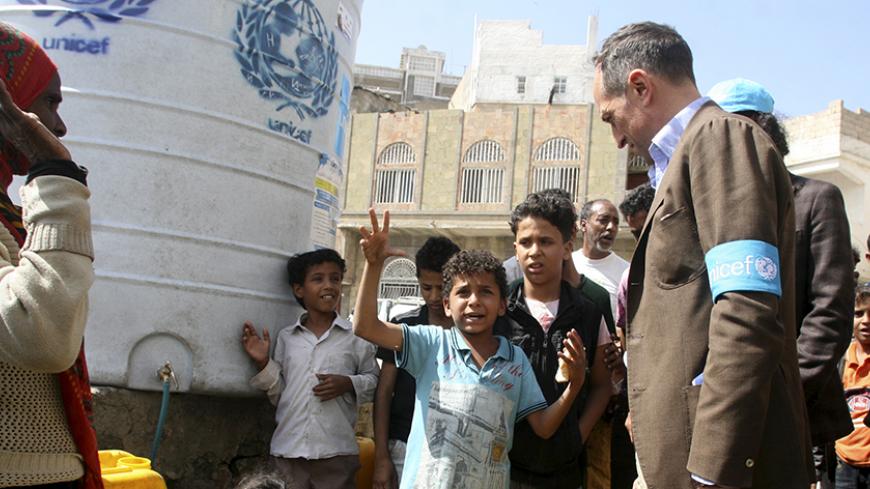 UNICEF's representative in Yemen, Julien Harneis, listens to a boy during a visit to Yemen's southwestern city of Taiz, Jan. 21, 2016. - REUTERS/Anees Mahyoub

ADEN, Yemen — The stories and scenes of civilian deaths and starvation in the Yemeni city of Taiz are nightmarish, coming on the heels of the siege imposed since April 2015 by Houthi rebels and forces loyal to deposed President Ali Abdullah Saleh. Anywhere one looks, only pain, sorrow and sadness stare back, in a scene reminiscent of the catastrophic situation that prevailed in Syria’s Madaya.

The siege in Taiz, in southern Yemen, is catastrophic, prompting the United Nations’ World Food Program to announce Feb. 15 that the city faces imminent famine.

Doctors Without Borders was able to deliver some aid in January, but the effort was merely a drop in the bucket. Taiz field hospital director Sadek al-Shujah told Al-Monitor, “For the past 11 months, populated neighborhoods of Taiz have been subjected to daily bombardments by the Houthis and their allies. There is a severe shortage of orthopedic equipment, which, in turn, is negatively affecting both injured people and the medical staff. Many of the surgical cases at hand require treatment in successive stages … [and] surgeries are proving difficult to undertake.”

Shujah added that they face difficulties in procuring medicines and medical supplies, particularly anesthetics, antibiotics, blood transfusion equipment, lab solutions, X-ray films and radiology supplies, as well as other supplies that speed healing. This shortage is complicated by the exodus of pharmaceutical companies and wholesalers that have left because of the siege and the stifling financial crisis.

“Furthermore, diagnostic tools such as MRI machines and endoscopes are failing, while bone-resetting equipment is in short supply. We have patients who have been in intensive care for three months due to a lack of needed medicines and intravenous solutions, which, when available, are exorbitantly expensive. We are treating 450 cases that require specialized treatment centers outside of Yemen,” Shujah said.

Some people needing special treatment have died while being treated in Taiz, while others have passed away in Aden, which is about 100 miles away. Shujah said Taiz is having great difficulties treating patients with renal failure, diabetes and hypertension. More than 25 patients died due to the lack of supplemental oxygen. Hospitals are turning people away.

He added that 37 hospitals and medical centers had been closed down in Taiz due to the siege and ongoing clashes that have exacerbated the shortage of fuel required to run generators.

An aid official in Taiz, Ayman al-Mikhlafi, said 70% of the city's 600,000 people fled to areas far away from the conflict zones. “The humanitarian situation is tragic, verging on — if not already — catastrophic, due to the fact that basic food and medical necessities are not being permitted entry into the city,” he told Al-Monitor.

He also indicated that people face a daily struggle just to stay alive and secure their food, water, medical and housing requirements in the midst of the continued bombardments by the Houthis and the ground battles with popular resistance forces.

What little aid has reached the city from international organizations barely covered 5% of the actual needs of its besieged inhabitants, Mikhlafi said. The Houthis also are restricting the entry of petroleum products and other basic materials, exacerbating the horror of the crisis.

Taiz is of great symbolic value, for it is the capital of the most populous governorate in the country and the first to rise against Saleh in 2011 during the Arab Spring. But the forces loyal to current President Abed Rabbo Mansour Hadi — which include a coalition spearheaded by Saudi Arabia and backed by the United States — have been slow to retake the city, which allowed the Iran-backed Houthis to tighten the siege. That sluggish response cannot be divorced from the disagreement between the United Arab Emirates (UAE) and Saudi Arabia.

The Saudi Arabia-UAE dispute revolves around the resistance's leadership in Taiz, which is made up mainly of members of the Yemeni Congregation for Reform (Islah Party), affiliated with the Muslim Brotherhood.

While Saudi Arabia has expressed considerable openness toward the Islah-led resistance, Abu Dhabi has taken an opposing stance. As clearly evidenced by the statements of Emirati officials, this indicates that the war in Yemen is being fought not against the Houthis, but against those affiliated with the Muslim Brotherhood.

The humanitarian situation in Taiz threatens to deteriorate into famine, particularly considering that aid only provides relief for a short period of time. The city’s inhabitants continue to suffer and live on the verge of death — a situation that can only be remedied if the siege is lifted and a semblance of normalcy is restored to life in Taiz.