Gaza’s hospitals are lacking essential medicines to deal with the anticipated spike in casualties from Israel’s airstrikes on Gaza. 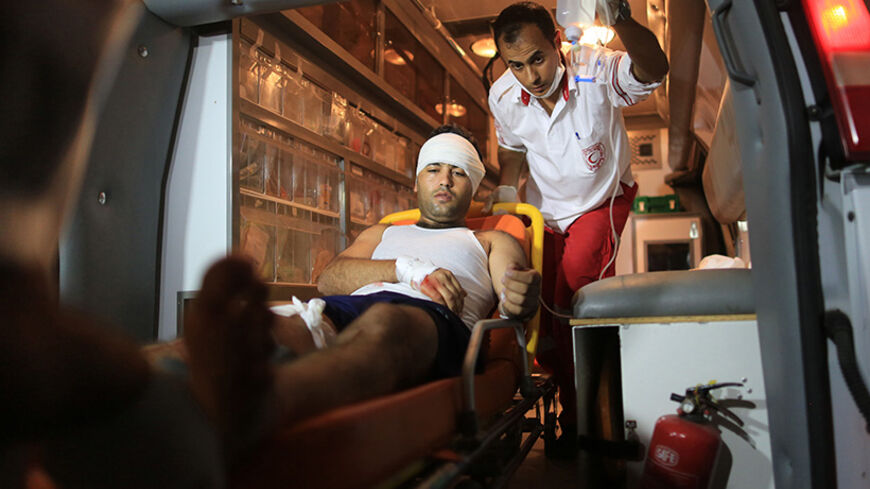 Medics treat a man they say was wounded in an Israeli airstrike at a hospital in Gaza City, July 8, 2014. - Wissam Nassar

GAZA CITY, Gaza Strip — Gaza hospitals fear an expanded Israeli assault on the Gaza Strip, which would increase the burden on them in providing health services and relief to citizens, in light of the severe shortage of various categories of medicine, medical supplies and fuel.

Gaza suffers from a lack of dozens of categories of important medicine and medical supplies, which have completely run out in storehouses. There is also a severe shortage of fuel imports needed to operate ambulances to transport the injured to hospitals and to operate power generators. The latter serve as an alternative to the electricity supply, which undergoes cuts of up to 12 hours a day, according to Ashraf al-Qadra, director of information at the Gaza Ministry of Health.

Speaking to Al-Monitor, Qadra said the fuel shortage crisis had reached the point that the ministry lacks 75% of its fuel requirements, which has halted 50% of ambulance capacity at the Ministry of Health. This threatens to increase in the number of dead and wounded should Israel expand its assault on the Strip.

In the last two weeks, Israeli warplanes have made dozens of airstrikes against various areas in Gaza's provinces. Qadra said these raids have led to the deaths of 68 people and wounded more than 500 since the start of the conflict. He said the injured were still arriving at the Strip's hospitals with the continued Israeli escalation.

These crises have led health institutions in Gaza to stop all scheduled surgeries and only perform emergency operations. The latter relate to "saving one's life," said Ashraf Abu Mahadi, director of the Department of Pharmacology at the Ministry of Health, in an interview with Al-Monitor.

For more than a month, Gazan resident Mohammed al-Aaloul has been waiting for administrators at al-Shifaa Hospital in central Gaza City — the largest hospital in the Strip — to agree to perform surgery on his 3-year-old son, Issa, to remove a cancerous tumor in his chest. However, the shortage of medicine and medical supplies in hospital storehouses presents an obstacle to removing the risk to the child's life.

"I take my son Issa to the hospital almost every day in order to put pressure on the doctors to perform the necessary surgery. The hospital's administration, however, tells me that they don't have the medical supplies needed for the procedure, thus postponing the surgery indefinitely," Aaloul told Al-Monitor.

According to Abu Mahadi, hospitals have been forced to follow these procedures to preserve their remaining medicine and medical supplies, for fear of a new Israeli war that would lead to hundreds of victims. 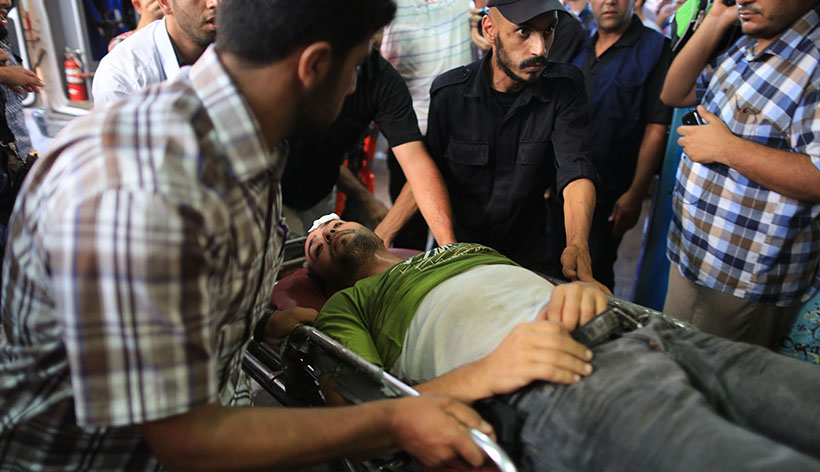 Medics treat a man they say was wounded in an Israeli airstrike at a hospital in Gaza City, July 8, 2014. Photo by: Wissam Nassar

Hani Hamada, the director of nursing in the department of surgery at al-Shifa Hospital, told Al-Monitor that the hospital was trying as much as possible to conserve the medical supplies and medicine it has left, because of the escalation of Israeli military attacks on Gaza.

"The occurrence of such a war, in light of the current crisis, would cause a real disaster and lead to a multifold increase in the number of victims and dead," Hamada said.

The responsibility for supplying medicine to Gaza, according to Abu Mahadi, lies with the Palestinian Authority in the West Bank. He said that the PA had sent a shipment of medicine, but it had nothing to do with the list of important medicines and supplies that the Ministry of Health in Gaza said it needed as soon as possible.

"This shipment did not include medicines and supplies needed for emergency situations, and will only last for a very short period of time," he said.

According to Ministry of Health documents obtained by Al-Monitor, the medicine shipment sent by the PA did not correspond to the demands or seriousness of the crisis. According to the documents, it contained only six varieties of medicine for which stocks had run out, and some medicine in the shipment was nearing its expiration dates.

Qadra said the Ministry of Health has began to work according to its "Plan B," which requires closing many departments in these hospitals and halting services, while keeping open the departments that require continued and necessary follow-up on cases of citizens who are very ill. "Our data suggests that the Israeli escalation will continue, and this requires us to work according to a plan for the provision of the remaining medicine and fuel in our storehouses, in order to keep up with the events of any Israeli war on the Strip," he said.

Qadra explained that, in the event the fuel and medicine crises continue, they will work according to "Plan C," which means no longer receiving any patients in many departments, and only maintaining health services in emergency departments and operating rooms.

"The current health situation in Gaza requires us to sound the alarm before the world, in order to support Palestinian citizens’ rights to treatment and pressure Israel to allow the required quantities of fuel to be brought into Gaza,” he said. He called on the World Health Organization to save the health system in the Gaza Strip before it was too late.