As companies struggle to restart production of medicines in Gaza, Palestinians face a pharmaceutical crisis stemming from war, Palestinian political division, Israel's blockade and Egypt's closure of the Rafah crossing. 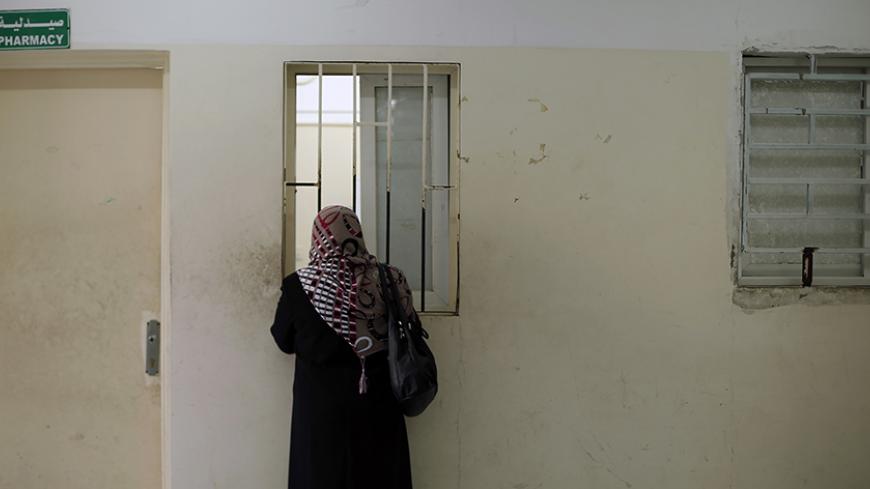 A Palestinian woman waits to receive medicine from a pharmacy at a hospital in Gaza City, Dec. 10, 2013. - REUTERS/Suhaib Salem

BEIT HANOUN, Gaza Strip — A severe shortage of medicine and medical supplies threatens the health of one-third of patients in Gaza, Ashraf al-Qudra, spokesman for the Ministry of Health, told Al-Monitor. “The shortage is at 32% for medicines and 38% for medical supplies, which is equivalent to 154 different types of medicines and 342 types of medical disposables,” said Qudra, warning of potential negative repercussions for Gazans' health should these shortages persist.

The blockade imposed on Gaza after Hamas took control of the territory in 2007 is preventing local factories from getting the necessary raw materials for medicines in addition to spare parts for equipment damaged by war and years of deterioration. Qudra told Al-Monitor, “The siege that has been ongoing for eight consecutive years has hampered companies’ ability to import medicines through the Israeli crossings, which led to a shortage in medicines and medical supplies, undermining the health [sector] in the Gaza Strip.”

He also accused the Palestinian consensus government of not fulfilling its duties toward Gaza, saying, “The Ministry of Health under the consensus government should transfer 40% of its medicine in Ramallah, most of which is provided by international parties, to the Gaza Strip, while 60% remains for the West Bank. However, only around 5% to 7% actually reaches the strip.”

Qudra further asserted, “That the Egyptian side has been preventing convoys of support and relief to enter through the Rafah crossing on the border with Egypt since former President Mohamed Morsi was overthrown in 2013 led to depriving the strip of 30% of its medical needs, gradually resulting in a decline in pharmaceutical [reserves].”

The wars with Israel have been another factor, casting a shadow over the sole industrial area in Gaza. Most of the factories there were destroyed or closed, while others produce very little. According to an official from the Palestinian Ministry of Health who requested anonymity, there are two factories producing medicine in Gaza, and a third factory is currently trying to meet licensing standards to begin production.

Lina Radwan, technical director of the Arab-German Pharmaceutical Production Company, told Al-Monitor, “The Arab-German company was established in 2013, in an attempt to offset the shortfall in some pharmaceutical products, as well as the high cost of imported products, in light of the deteriorating economic situation.”

The Arab-German company began producing medicines in 2014. Thus far, it has brought seven medicines onto the market, including drugs for mental illness, antibiotics, antihistamines and different types of pain relievers, and now hopes to increase production as well as development.

Middle East Pharmaceutical and Cosmetics Laboratories Ltd., or Megapharm, which began production in 1997 with six types of medicine, has gradually grown over the years. Marwan al-Astal, a Megapharm director, told Al-Monitor, “We started out producing six different types of medicine, and now we produce 87 that meet 15% of the local market’s needs, including antibiotics, capsules, ointments and creams.”

Megapharm, located in the northern industrial area near the border town of Beit Hanoun, was hit by artillery fire during the war in summer 2014, resulting in the destruction of the factory’s main control room, its stock of raw materials, drugs and some manufacturing areas. After a four-month interruption, the factory resumed operations. Megapharm manages only a quarter of the output as it did before Israel blocked the export of pharmaceutical products and equipment from Gaza to the West Bank, while theoretically allowing the import of products from the West Bank and Israel.

“We request the raw materials through Israeli companies, and in spite of having a license from the Israeli Ministry of Health and the Israeli supplier companies, after the products start coming in through the Kerem Shalom crossing, the only commercial crossing, the Israeli authorities either return them or prevent their entry without giving reasons,” Astal said.

He rebutted the often-cited Israeli argument of potential dual-use — for medical as well as military purposes — in justifying the prohibition of certain raw materials. “Had they been forbidden at the security level,” said Astal, “we would not have gotten the Israeli Ministry of Health’s approval to import them in the first place.”

The ministry usually tries to acquire drugs only produced in other countries in the form of aid from the United Nations, but Bursh remarked, “The political division began to impede the flow of medicine from international parties straight to the strip. They are being transferred to the West Bank instead.”

Like others, Bursh blamed the Israeli siege, Egypt's closing of the Rafah crossing and the failure of the consensus government for Gaza's difficulties in obtaining adequate medical supplies and medicines. He lamented, “The problem [is] more complicated than it sounds.”