How one Syrian group is helping kids get back to school

The Olive Branch Organization is building schools in war-damaged areas of Syria, realizing that without education and psychological support, children might become "time bombs" destined to lives of anger, frustration and violence. 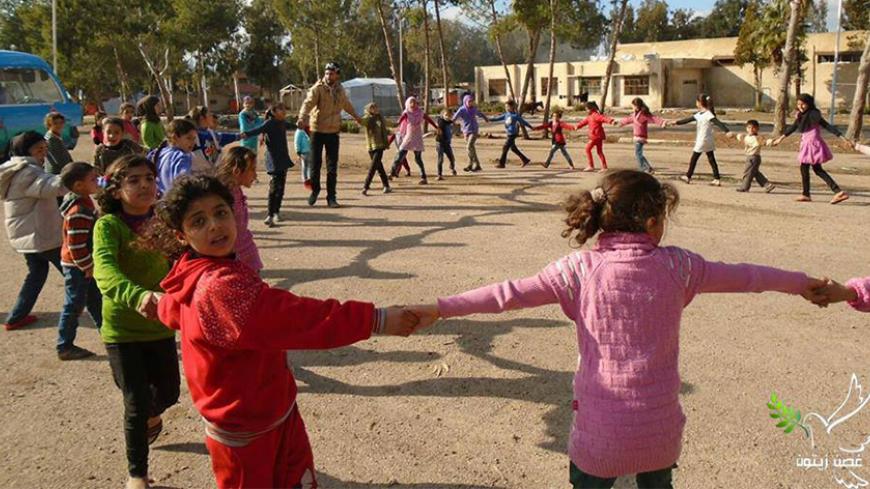 DAMASCUS, Syria — Some 2.1 million children are deprived of education in war-torn Syria, according to United Nations statistics released Feb. 2. About one-fourth of the nation's schools cannot be used because they have been damaged or destroyed, or are being used to shelter displaced families or for military purposes.

To help children and women in areas where state institutions are absent, the Olive Branch Organization is active in Daraa, an opposition-controlled province in southern Syria. The organization, which relies on private donations, has initiated aid campaigns such as “My Room is My Classroom." That effort, launched in 2012, provided school supplies and toys to help make up for the shortages displaced children have suffered since regime forces stormed the Dara'a al-Balad and Tareeq al-Sadd neighborhoods.

On Jan. 26, the organization also opened the Zeitoun First Vocational Center, where various courses and activities are held, such as sewing, computer maintenance, management and marketing.

The organization’s chairman of trustees, Suhaib al-Zoubi, told Al-Monitor the organization opened its first school in December 2013, in Saida. The school was aptly named Dar el-Zeitoun Liltaaleem Waltarfeeh, or the Olive House for Education and Entertainment. This was followed by a succession of other schools in various areas of Daraa, the latest being the Ninth Olive Branch School, which opened in al-Shajara in October 2014.

“Each school includes a kindergarten, an elementary school and a psychological support center. The number of children benefiting from these schools is 3,111, ranging in age from 5 to 12 years old," Zoubi said. "The teaching staff numbers 106, chosen from among those possessing previous experience in elementary-level schooling, or those who attended training workshops held by the Olive Branch Organization.”

Some of those staff members traveled to Jordan for training seminars. They also participate in periodic Skype workshops, said Dima Mohammed, who heads child protection services for the organization.

“In wartime, the priority for families becomes securing food resources and staying out of harm’s way," she told Al-Monitor. "Education takes a back seat, and therein lies the importance of this project, which allows us to offer help and education to children. At the end of the war, and in the absence of education and psychological support now, some children will be the biggest obstacle to progress, as they become time bombs waiting to explode. That is why we are trying to instill in them the values of tolerance, while preventing them from taking up arms or being recruited.”

Mohammed added, “Truancy from state schools is rampant, with 70% of Daraa’s children attending what remains of state schools only three times per week, due to the lack of oversight and motivation. Furthermore, these schools have been bombed and are ill-equipped to protect and educate children in times of war.”

Zoubi said Olive Branch strives to increase awareness of women's and children's health issues and to empower those segments of society. The group also provides psychological support to children through the international IDEAL program, which consists of 16 to 18 one-hour sessions.

“We employ a safety and protection team tasked with choosing building locations in safe areas that are far from any clash or bombing sites. We also have plans to evacuate and house children in shelters; we have first-aid kits, food and transportation to transfer children in emergencies. Most importantly, agreements have been entered between the most influential tribes in the region and militant factions, whereby no armed presence is allowed within 1 kilometer [about half a mile] of school areas, to protect children from regime shelling,” she told Al-Monitor.

She said, “We currently only operate in opposition-controlled areas. If the regime regains control of these areas, then our hope is that those schools are not shut down and their staff arrested. We have not given that probability much thought yet, and consequently do not have any alternate plans. The security issue and fear of arrest are the main hindrances preventing our expansion into regime-held areas, for the regime frowns on the establishment of private institutions beyond its control. We tried to organize children's activities in the regime-controlled Daraa al-Mahata in October 2012, where we went to children’s homes to aid in their schooling. But the project was abandoned when security forces arrested a member of our staff there.”

Olive Branch depends on a number of donors, such as Save the Children in Jordan, the Norwegian Refugee Council and the Beitna Souria (Our Home Syria) organization in Turkey. One of Olive Branch's biggest challenges is that it has no board of directors physically present in affected areas to assess progress; that is why it resorts to training follow-up teams to assess the projects' effectiveness.

The organization is working on a number of development projects in agriculture and land reclamation, and in distributing aid to help people establish self-sufficiency.

Zoubi said the schools are open to everyone, with no discrimination. Even when the war ends, Olive Branch will continue to build schools in affected areas, but will start collecting money from the children’s families for private schools and centers, Zoubi said.