Is the Saudi, Lebanese relationship gone for good?

In retaliation for Hezbollah’s support of the Houthis in Yemen, Saudi Arabia has launched a campaign designed to pressure Lebanon. 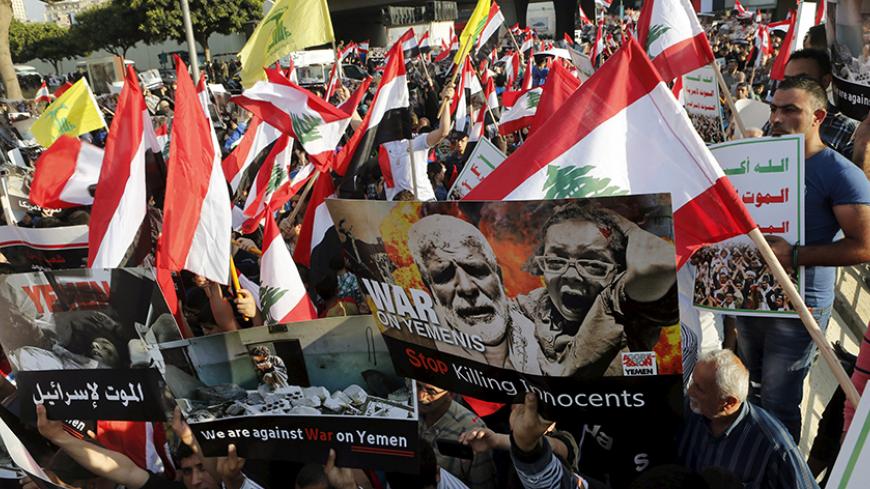 Protesters carry banners and wave Lebanese, Yemeni and Hezbollah flags during a protest against Saudi-led airstrikes on Yemen, in front of the offices of the UN headquarters in Beirut, May 12, 2015. - REUTERS/Mohamed Azakir

BEIRUT — There seems to be more to Saudi Arabia's political assault on Lebanon than first meets the eye.

As previously reported, the kingdom recently canceled its long-awaited, $4 billion arms deal to support the Lebanese army and security forces and is making a comprehensive review of its relationship with Lebanon. Also, numerous Gulf states have joined Saudi Arabia in warning their citizens not to travel to Lebanon and to leave Lebanese soil.

Riyadh cited the actions of Lebanese Foreign Affairs Minister Gibran Bassil — head of the Christian Free Patriotic Movement, an ally of Hezbollah — during a Jan. 10 ministerial meeting of the Arab League in Cairo. Bassil declined to condemn the early January attack on the Saudi Arabian Embassy and consulate in Iran.

However, Lebanese security sources told Al-Monitor that several reasons underlie the Saudi escalation. The sources described the Saudi campaign against Lebanon as fierce.

The first objective of this campaign, they said, is to deliver Hezbollah a heavy blow in its own stronghold. Saudi Arabia is responding to Hezbollah's support for the Houthis in the ongoing war in Yemen, which the kingdom blames, in part, for its failure to reach its military goals there.

The Saudis aim to push Lebanon's March 14 Coalition to apply pressure and turn public opinion against Hezbollah and its allies, most notably Bassil's Free Patriotic Movement — especially regarding Hezbollah’s interventions in Yemen and Syria and its influence in Lebanon's government, the sources said.

The same sources explained that 11 months after Riyadh launched Operation Decisive Storm against the Houthis in Yemen, the battle doesn't seem to be headed in Saudi Arabia's favor. In addition, the European Parliament accused Riyadh of targeting Yemeni civilians with airstrikes and called for a ban on the export of arms to Saudi Arabia.

Many people believe Saudi Arabia hopes to recoup some of its losses in Yemen by ditching the $4 billion weapons deal with Lebanon. Lebanon's political and security instability is a pressure point on Hezbollah, which is preoccupied with the war in Syria and the permanent Israeli threat. According to the sources, any sectarian strife in Lebanon will not be in Hezbollah’s best interest, especially as it has been classified as a terrorist group by part of the international community.

A Lebanese diplomatic source told Al-Monitor that last month, the Kingdom of Saudi Arabia canceled the residency permits of more than 1,000 Lebanese nationals, mostly Shiites and Christians. This news also spread on several Lebanese media outlets. The Saudi decision will also affect more than 250 Lebanese companies operating in Saudi Arabia, which will be given three months to liquidate their business activities. This is while Saudi Arabia has already notified 90 families that it will deport them, and classified four companies on the terrorist list because of their relations with Hezbollah.

In this context, Lebanese daily As-Safir quoted Feb. 24 the Saudi ambassador to Lebanon, Ali Awad Asiri, as saying to France Presse that the Lebanese will not be deported if the Lebanese government takes certain measures. He called the government to “wisely and bravely” fix the mistake a particular government party — without naming it — had made against the kingdom.

Bahrain, the United Arab Emirates and Kuwait applied similar procedures against Lebanese residents, according to the same source, confirming that these countries decided to halt their banking activities with Lebanon and suspend their partnerships in the Lebanese banks or in their national banks with branches in Lebanon. The source also indicated these countries froze the assets and bank accounts of Lebanese Christian and Shiite businessmen.

The source explained that another undeclared trigger of Saudi Arabia’s campaign against Lebanon includes the situation in Syria, in light of a fragile cease-fire that supposedly started Feb. 27 under US-Russian auspices. Saudis are trying to achieve field gains before the March 7 start of talks between the Syrian regime and the Syrian opposition, which would allow the Saudi-backed opposition to achieve gains tipping the negotiation terms in its favor.

Therefore, Saudi Arabia is seeking to form Arab-Turkish alliance forces to participate in the ground operations that the kingdom intends to launch in Syria, specifically in the north. Preparations have begun for these operations, and Turkey put its Incirlik Air Base at the forces' disposal.

The source added that a potential Saudi ground invasion of Syria requires a reconsideration of the Lebanese military border procedures, given that the evolution of the battles in northern Syria will put pressure on Lebanon as a result of the displacement of refugees and the movement of insurgents.

The source said Saudi Arabia thinks that by invoking the Arab consensus, it can pressure the Lebanese army and government to coordinate with the Arab-Turkish alliance forces, in which case Lebanon would find itself in an embarrassing situation, since Hezbollah is deployed on its borders with Syria — at least the eastern borders.

On a related note, the same source revealed that Saudi ambassador Asiri called on Sunni cells to organize meetings in the Palestinian camps. This is especially true in Ain al-Hilweh, where Palestinian factions announced a state of alert in southern Lebanon, Beirut and the north, to prepare for any action that may be required of them against the Lebanese government's policy and any potential armed deployment of Hezbollah.

The source said only one of two scenarios might put an end to the Saudi madness. The first would be to give Lebanon a time limit to elect a president while giving the kingdom final say on the choice and of the new Sunni prime minister, in such a way that both premierships would be deemed affiliated with Saudi Arabia. This solution might further add to Saudi Arabia’s influence over Lebanon on one hand and undercut Hezbollah’s internal influence on the other.