While the central Iraqi government claims that a wall is needed around the capital for security reasons, Sunnis suspect that Baghdad is being isolated in preparation for annexation to a Shiite region. 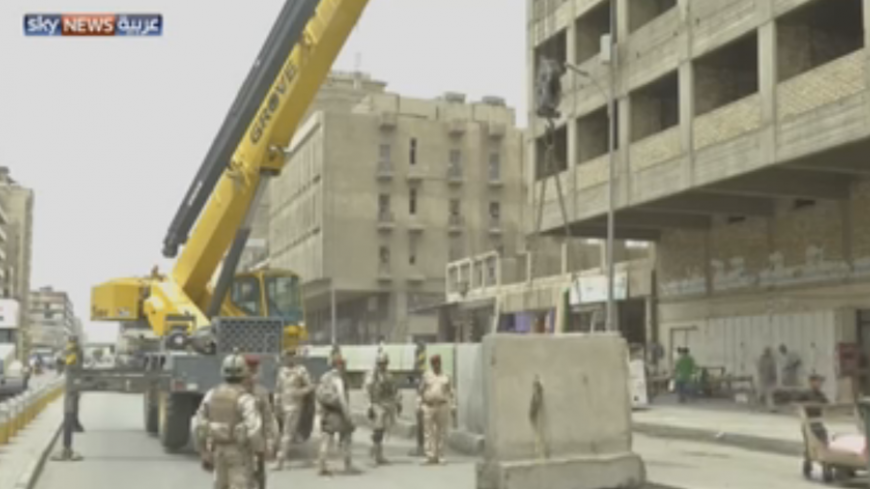 Construction is underway for a security barrier around Bagdad, Feb. 7, 2016. - YOUTUBE/Sky News Arabia

BAGHDAD — The Iraqi government has embarked on the construction of a wall around Baghdad to protect the capital from terror attacks that have been ongoing since 2003 and to isolate it from hotbeds in the northern and western parts of the country. Sunnis object to the move, fearing the wall will deepen internal divisions.

There are conflicting reports on the height and route of the barrier. The Baghdad Operations Command said in a press statement Feb. 3 that the capital will be surrounded by concrete barriers, half of them repurposed from existing ones inside Baghdad. The wall will rise to between 3 and 7 meters (10 and 23 feet) high and have a 2-meter-deep (7-foot) trench, according to al-Sumaria.

Regularly spaced control towers will also be established. Five groups of Iraqi military engineers will take part in the construction project, which started Feb. 1. The wall will ultimately engulf the surroundings of the capital and stretch over 300 kilometers (186 miles).

Baghdad Operations Command's Lt. Gen. Abdul Ameer al-Shammari confirmed in a Feb. 10 press statement that the wall is being built for security reasons and no concrete barriers and trenches will run along private lands or areas outside Baghdad. The entire capital would become like the fortified Green Zone, where government headquarters and international embassies are located.

Contrary to the authorities’ claims, the Sunni Union of Nationalist Forces insists that the wall goes beyond the administrative border of Baghdad and there are no security reasons for it. Member Hamid al-Mutlaq told Al-Monitor, “The concrete wall will inevitably exceed the administrative border of the capital and take possession of parts of Anbar, which security authorities intend to annex to Baghdad and Babil. Moreover, it will pass through private agricultural lands.”

Mutlaq, a parliament member for Anbar province, added, “The real objective behind the construction of the wall is to isolate Baghdad from Sunni areas in preparation for annexing it to a Shiite region in case a federal system or partition is implemented. It is also designed to restrict a particular sect. Therefore, the other party is the one that started with partition, not the people in the Sunni provinces.”

Mutlaq expressed his surprise at “the Shiite political forces’ condemnation of the trench in the Kurdistan Region and their accusation leveled at the Kurds that the wall would pave the way for the country’s partition and annexation of Arab lands outside the region. This is while they neglect similar objections and accusations by the Sunnis regarding the wall and trench of Baghdad.”

He added, “The barrier of Baghdad is no different from the trench of Kurdistan, as the [barriers] do not address the security situation. Rather, there are political goals behind them.”

In January, the Kurdistan Regional Government dug trenches claiming that they were designed to protect the peshmerga forces from attack by the Islamic State (IS). Yet Sunni and Shiite parties considered them to be the beginning of the country’s partition.

For his part, Iraqi Defense Minister Khaled al-Obeidi, another member of the Union of Nationalist Forces, had confirmed in a Feb. 9 statement that the objective behind the wall is “to protect and secure the units scattered in the vicinity of Baghdad and bring about security in the capital," saying, "It will not affect the movement of citizens, isolate some areas or result in the bulldozing of orchards.”

He added, “The Iraqi political leaders do not have a clear idea on the wall.”

Obeidi's remarks did not affect the conviction of the Sunni blocs. Mutlaq said, “Most of the areas surrounding Baghdad are inhabited by a Sunni Muslim majority. This majority lives in areas stretching between Baghdad and Anbar to northern Babil, which will be isolated.”

For his part, Iskandar Watout, a member of the security and defense parliamentary committee, told Al-Monitor, “The construction of the wall around Baghdad is normal after concrete barriers were proven effective in protecting Baghdad’s neighborhoods. The wall cannot be a reason for political differences, as it is related to the security services’ job.”

He added, “The primary goal of the wall is to monitor car bombs after surveillance cameras are installed, which will be 10 kilometers [6 miles] away from the nearest city, particularly since these car bombs pass through informal and unpaved routes.”

Former Deputy Interior Minister Adnan al-Assadi, a member of the security and defense parliamentary committee, said in a Feb. 8 statement, “The objective of the Baghdad wall is to unify the entrances and exits from the capital, and it is not designed to isolate it from other provinces.” He added, “The main reason behind the wall is the presence of dirt roads that gangs and terrorists use to enter [Baghdad] and that are difficult to control.”

Assadi explained, “The project to build the wall goes back to 2007 and 2008, but it was postponed due to a lack of financial liquidity. Before the project was suspended, a French consulting company was entrusted to carry out a feasibility study on a wall around some areas.”

Security analyst Fadel Abu Raghif spoke to Al-Monitor on the nature and form of the wall. He said, “The capital cannot be surrounded by a wall on all sides, given natural obstacles such as forests and bodies of water as well as industrial areas like al-Kasarat and Dhiraat Degla, where gravel and cement factories are located. This is why the Baghdad Operations Command is working to create a belt, not a wall, around Baghdad.”

He added, “Areas where it is difficult to build a wall will be surveilled with all sorts of cameras, such as sensors and night vision cameras. Control towers will be built and trained police dogs will be present. Based on that, the forests and bodies of water will be a natural part of the barrier. The concrete barriers and trenches will only be built where terrorists are expected to infiltrate, especially in the northern and western parts of the capital.”

The wall around Baghdad may help reduce terror attacks, but may deepen the Sunni-Shiite divide as talk grows louder on the establishment of regions, secession and arrangements based on sects in the post-IS era.

Even if the Sunnis are convinced of the security imperatives behind the construction of the wall, their concerns will remain unchanged, as the possibility remains that the wall be used for the potential annexation of Baghdad to the Shiite region or the annexation of parts of the Anbar and Salahuddin provinces to Baghdad.