Why Israelis and Palestinians demonize each other

Israeli senior politicians and officials are demonizing the enemy by accusing Palestinian society of sanctifying death instead of cherishing life. 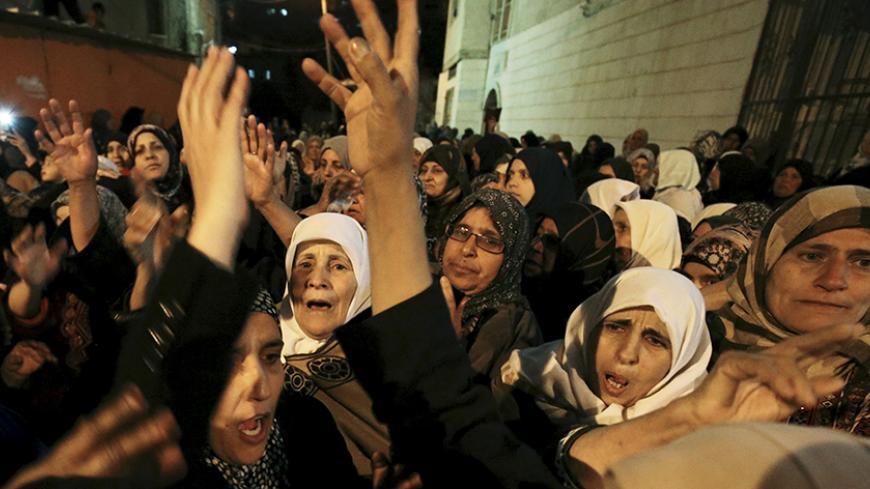 Women mourn during the funeral of Palestinian Ahmed Zakarna in the West Bank town of Qabatya, near Jenin, Feb. 5, 2016. Zakarna and two other Palestinians armed with guns, knives and explosives killed an Israeli border policewoman and seriously wounded another before being shot dead by nearby officers at an entrance to Jerusalem's walled Old City on Feb. 3, Israeli police said. - REUTERS/Mohamad Torokman

Against the backdrop of the “Individuals' Intifada,” an emotionally charged discourse has been taking place in Israel in recent weeks on the sanctity of life in the eyes of Israelis versus the sanctity and glorification of death among the Palestinians. Had the debate been confined to the social networks, with all sorts of ideological, religious or psychological “explanations” proposed to the conflict, it is doubtful whether this discourse would have been taken seriously. However, the debate emerges from top decision-makers within the Israeli political and security establishments.

The argument often raised is that the Palestinians are readily sending their children to their death and that human life is regarded cheaply in their eyes, while the Israelis bitterly mourn every victim of a terrorist attack and every fallen soldier on the battlefield, seen by Judaism as constituting “an entire world” (Babylonian Talmud, Tractate Sanhedrin 37a).

Education Minister Naftali Bennett has taken it even further. At the Cabinet meeting Feb. 21, he said that Palestinian parents were not stopping their sons or daughters from going out on stabbing attacks, realizing that if their children get killed, the family was assured of a cash grant and an allowance from the Palestinian Authority (PA). Bennett went on to propose that the funds granted by the PA to the families of terrorists be offset from the tax money collected by Israel on behalf of the Palestinians. He was unaware that Israel has already been doing just that.

On Feb. 22, at a meeting with bereaved parents in Eilat, Chief of Police Roni Alsheikh compared the way Israelis experienced bereavement with the way “our neighbors,” as he put it, dealt with it. “Their underlying message is that there is no significance to life, and that by pressing a button or pulling a knife, one can move on to a better world and be rid of the challenges of this world,” the chief of police said.

Alsheikh critically alluded to the statements made by Army Radio broadcaster Razi Barkai during an interview with Public Security Minister Gilad Erdan on Feb. 7. Minister Erdan has been halting the transfer of bodies of Palestinian attackers who were Jerusalem residents for burial by their families. With reference to the policy adopted by the Ministry, Barkai told Erdan: “[comparing to Palestinian bereaved families] Imagine Israeli families — and sadly we know cases like that … waiting and waiting for the bodies of their loved ones to return.” “That’s the comparison you’re making?” Erdan said, clearly shocked. The interview has sparked an outcry throughout the country and prompted a call by Israeli bereaved families to suspend Barkai, who is one of the veteran radio broadcasters in Israel.

Defense Minister Moshe Ya'alon joined in the discourse. On Feb. 23, Ya'alon said, “We are facing a society that sanctifies and glorifies death. … There is no room for any comparison between our bereavement and the way the loss of life is experienced on their side. We have chosen life.”

The theological philological argument underlying the comparison made about bereavement should be clarified at this point.

According to Islam, the term “shahid” denotes a Muslim who has sacrificed himself in the name of Allah. These days, a martyr sacrificing himself for a national cause is honored with the same title. During funerals of terrorists or Palestinians killed by the Israel Defense Forces (IDF) in clashes in Gaza or the West Bank, the dead are customarily hailed as “Al-shahid habib Allah!” (The martyr is the beloved of God). Yet one may wonder whether the use of religion to promote national causes can be attributed exclusively to Muslims, or just to the Palestinians.

Consider, for instance, a question raised on Kipa — one of the leading websites of the religious Zionist community in Israel — concerning “a death sanctifying God's name in military service in an elite unit.” The question is posed by a combatant in an elite IDF unit, asking the rabbi's advice on the issue troubling him: As someone who takes part in military operations deep inside enemy territory, would it be deemed acceptable in terms of the Jewish faith to voluntarily sacrifice one's life in the name of God? And here's the rabbi’s answer: “Blessed are you to have reached such a high level of sanctifying God. Your willingness to sacrifice yourself for the sake of Israel and the Jewish nation is noble indeed. And blessed are we to have young men like you among us. Your words are inspiring, giving us all who read them courage and inner strength. Bravo! May God be with you.”

The attempt to present the Israeli-Palestinian conflict as a religious conflict is simplistic and evasive, dodging the really important issues. The ongoing intifada apparently broke out on the backdrop of incitement — claims that Israel was taking over Temple Mount and damaging Al-Aqsa Mosque. But since then, the intifada has kept going, and it appears that many Palestinian youths are joining it motivated by completely other reasons. The security establishment is well-aware of these causes and so are the political decision-makers in Israel. It has been stated once and again in all possible forums that the growing despair among young Palestinians, their dire economic situation and the absence of a political horizon push young individuals to set out on terrorist attacks in Israel.

Why then has the discussion in Israel been sidetracked to questions of bereavement and the sanctity of death or life?

Well, in the heat of war, any war whatsoever, the demonization of the other side is often used as an indispensable psychological means of tackling the other side. The enemy is invariably presented as inhumane and as driven by irrational considerations. Such demonization, utilized by both sides, enables the decision-makers to avoid critical decisions and, needless to say, to shirk all responsibility for the situation.

In the Palestinian incitement video clips, Israelis are depicted as bloodthirsty animals viciously hounding the Palestinian people. As for the Israelis, these days, when the intifada is raging, the Palestinians are seen in the eyes of many as death seekers for whom life means nothing. They are sent to die for no reason at all — thus the myth goes; it is in their nature, and that's what their leaders believe in, encouraging them to sacrifice their lives in vain. In this discourse, the real causes for the situation are put aside.

Prime Minister Benjamin Netanyahu usually puts the blame on Palestinian President Mahmoud Abbas and on the PA. As far as Netanyahu is concerned, they are engaged in rampant incitement against Israel, and this is the real trigger that sparked the recent wave of terrorist attacks against Israelis. Going by this premise, once the incitement is checked, once Palestinian media is shut down and Palestinian websites and social networks are put under control, the security problem Israel is currently coping with — so far, unsuccessfully — will disappear on its own.