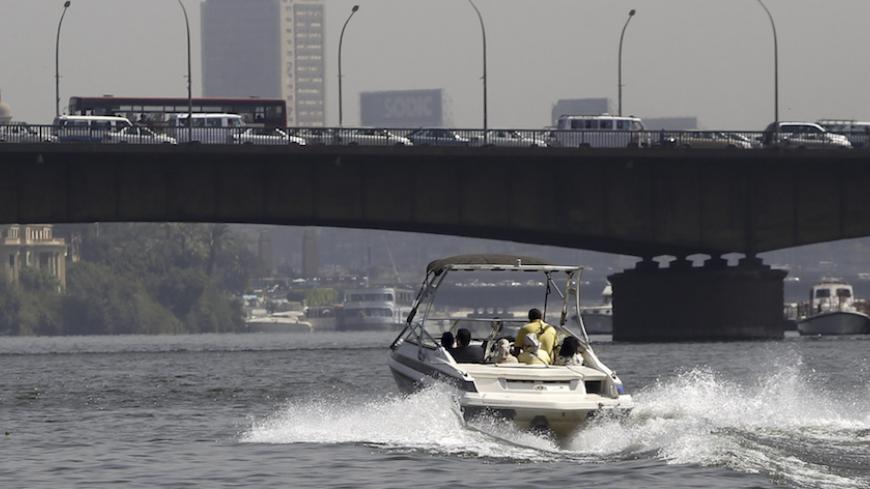 CAIRO — Cairo commuters can finally see some movement ahead in the city’s river taxi project, which is designed to alleviate the acute traffic congestion plaguing Cairo’s roads.

The initial phase of the project is to launch this year, but has been stuck in a bureaucratic snarl-up.

On Jan. 12, the Egyptian Ministry of Transportation announced it is studying bids from three contractors for the project, which will start in Helwan south of Cairo and span some 40 miles to El Qanater el Khayreyya.

International transportation expert Hamdi Barghout told Al-Monitor that investors are reluctant to get involved in river projects because each one requires 18 permits total from the ministries of health, archaeology, tourism, defense, interior and environment. Failing to obtain permission from just one of these ministries could halt the project.

Barghout wants to see a Cabinet-affiliated body established to license Nile projects once specialists from all the ministries are done studying them. This could prevent detours in the project and spare investors a great deal of time and effort.

He pointed out that under current law, police fine illegal vehicles but do not confiscate them. This puts passengers at risk.

According to Barghout, the river taxi project is a total fiasco. The projected fare in the feasibility study could reach 50 Egyptian pounds (about $6), an amount many Egyptians cannot afford. Also, river landings lack garages or links to public transportation such as the subway.

In other words, river taxis won’t be an option for the poor or an attractive investment for the rich.

Engineer Samir Salameh, an adviser to the transportation minister, told Al-Monitor that specifics are under legal review and that reports about the fare reaching 50 pounds are false, as the fare will depend on the distance customers travel.

Maj. Gen. Maher Hafez, assistant interior minister, chairman of the police supreme council and former head of the water surfaces police, told Al-Monitor that this project will not solve Cairo’s traffic crisis. The problem can only be eased by having citizens leave Cairo, expanding subway networks and establishing integrated urban communities where citizens don’t have to commute to the city every morning. Therefore, new jobs should be created in these communities.

Hafez said the surfaces police should have full control over river vehicles, as is the case with the traffic police, who control all forms of land vehicles, be they private or cargo vehicles, motorcycles or taxis. However, the river transportation body currently grants licenses to motorized units, while municipalities grant licenses to sailboats and rowboats.

Transportation Department spokesman Ahmed Ibrahim told Al-Monitor that insurance companies will be contracted to secure cargo and passengers against disasters. He added that the ministries of environment and transportation hold weekly meetings to follow up on implementation of environmental requirements, especially in transporting goods such as coal and clay.

Hisham Hamama, whose company is one of the three bidding on the project, told Al-Monitor he had to deal with five government agencies to complete the required paperwork: three ministries (transportation, environment and irrigation), Cairo province and Giza governorate.

However, he praised Minister of Transportation Saad Elgioshy, saying that in only 48 hours, Elgioshy was able to stimulate a project that had been pending for three years.

The final cost has yet to be determined, Hamama said, because the River Transport Authority suggested a daily fee of 7.5 pounds (about $1) on each seat along with other landing fees, which makes for a steep investment for a fledgling project.

However, Maj. Gen. Ismail Rida, head of the River Transport Authority, told Al-Monitor that reports of a 7.5 pound charge per seat are false, saying all of the submitted bids are still under study and no decision has been issued. The state wants to encourage investors, not create obstacles, he added.

But Hamama said a major problem faces investors: The project mainly targets car owners, and the idea is for citizens to park their cars at the nearest river landing and take a river taxi. However, since no garages are planned near the landings, the plan is to use river buses in crowded places, to transfer passengers to river quays.

He explained the difference between a river bus and a river taxi. The former, which is subsidized by the government, is for the general public and its speed reaches up to 15 kilometers (9 miles) per hour. However, the latter is not subsidized and its speed reaches up to 45 kilometers per hour. Also, river taxis can reduce the number of cars in the streets because they target specific trouble spots. Taxis can also reduce the cost of fuel consumption subsidies offered to car drivers and improve environmental conditions. Hamama noted that his bid outlines a plan to operate taxis using solar power.

For his part, the transport authority’s Rida said the project will help solve the traffic crisis in Cairo. He pointed to the success of the expanding Cairo Metro Line subway project, which he said will attract more investors in all provinces, not just in Cairo.