A recent speech by President Mahmoud Abbas was widely perceived by Palestinians as underwhelming, with some claiming its main goal was to assuage rumors that the leader suffers from failing health. 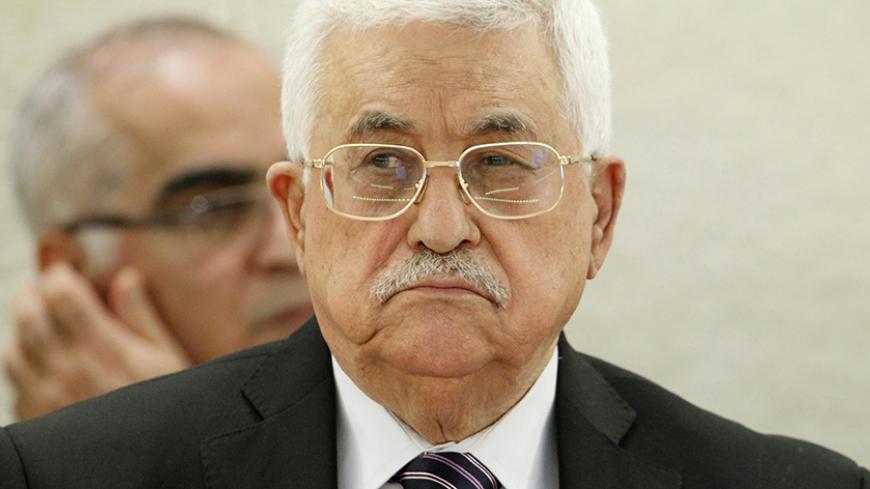 RAMALLAH, West Bank — “Unsurprising” and “underwhelming” appear to best characterize the speech delivered by Palestinian President Mahmoud Abbas Jan. 6 that led to widespread expressions of frustration among the Palestinian populace. In light of the political dead-end with the Israelis, everyone — except perhaps the Fatah movement that Abbas leads — had expected, or hoped for, a speech announcing potentially game-changing decisions or at least a way to move the Palestinian cause forward, beyond its current crisis.

Abbas in the speech reaffirmed the Palestinian leadership’s commitment to the Palestinian Authority (PA) and its affiliated institutions, which he presented as a national achievement. In light of Israel's refusal to cease settlement building and return to the negotiating table, Abbas called for an international conference to compel Israeli compliance with resolutions related to the Palestinian issue. He also proposed that Hamas and other factions agree on the formation of a national unity government and take part in legislative and presidential elections, which he alleged Hamas was avoiding for fear of failure.

Responding to the speech, the Popular Front for the Liberation of Palestine (PFLP) said that Abbas had failed to rise to Palestinians’ expectations for some clear decisions from their leadership, particularly in regard to relations with Israel. The faction also complained about Abbas' failure to express support for the intifada, ongoing since early October, which the various components of Palestinian society back as resistance against Israel.

One PFLP leader, Kayed al-Ghoul, told Al-Monitor that the speech had been a means to dispel rumors that Abbas was suffering from major health problems and to respond to Israeli assertions that the collapse of the PA is a foregone conclusion. Ghoul stated, “The president’s speech was lacking and devoid of the substance that we expected.” He also thought it unlikely that an upcoming meeting of the Palestine Liberation Organization's (PLO) Central Committee would lead to decisions capable of rescuing the Palestinian cause from internal division and the failure of negotiations with Israel.

Ismail al-Ashkar, a Hamas-affiliated member of the Palestinian Legislative Council, offered a different perspective, telling Al-Monitor, “President Abbas’ speech did not surprise us at all because its content was already known, especially the accusations that Hamas did not want elections to be held and refused to hand over administration of the Rafah crossing to the PA.”

Ashkar added that Abbas’ speech aimed at shifting the blame to others for the crises plaguing the PA and Fatah. He stressed that Hamas stood ready to hold elections and participate in a national unity government, but, he added, “on consensual terms and after the complete implementation of the reconciliation agreement signed in Cairo on May 4, 2011.” The agreement was supposed to have brought an end to the internal division and lead to developing a political plan for the coming phase. Ashkar in part blamed what he called Abbas' failure to properly manage the Palestinian cause and his lack of political ideas for creating the crises that have befallen the Palestinian people, including the siege of Gaza, closing of the Rafah crossing and ongoing Israeli settlement activities in the West Bank.

Fatah, unsurprisingly, painted Abbas’ speech as being positive in its presentation of internal or external matters as well as its renewed affirmation of the Palestinian people’s rights and insistence on the peace option, despite the difficult circumstances confronting Palestinians. One Fatah leader, Fayez Abu Aitah, told Al-Monitor that the most important aspect of Abbas’ speech was his call for an international meeting to compel Israel’s compliance with international resolutions, the formation of a national unity government and holding elections in the territories. He said the coming period would witness intensive meetings of the Palestinian leadership to agree on Central Committee mechanisms and decisions related to political, economic and security relations with Israel.

In a Jan. 6 televised statement, Hassan Asfour, former Palestinian Minister for State Negotiation Affairs, told the Ghad al-Araby channel that Abbas’ speech had been viewed by the presidential office as an exercise in reassuring Palestinians about Abbas' health, which is why it seemed a setback at the political level.

Various Palestinian analysts and observers believe the president’s speech confirmed the failure of the approach adopted by the leadership vis-a-vis Palestinian factions as well as Israel. Assaad Abu Shirkh, a political analyst and retired political science professor at Al-Azhar University in Gaza, concurred with the assessments that the goal of the speech had been to dispel rumors about Abbas’ health and Israeli assertions that the PA stands on the verge of collapse.

Abu Shirkh also told Al-Monitor that Abbas was trying to absolve himself of blame for the failure of the Palestinian movement. According to him, everyone had been waiting for Abbas to announce decisions that would reinvigorate and rescue the Palestinian national project, including a plan to lift the Gaza blockade and convene the PLO leadership. Abu Shirkh contended that the PA held a very strong card that for unknown reasons it refused to play, namely, listening to the Palestinian people instead of complying with US and Israeli wishes when it comes to negotiations and security cooperation as well as restoring cohesion among the Palestinians.

An-Najah National University political science professor Abdul Sattar Qassem thinks it would be best for Abbas to refrain from giving speeches, because he never offers political programs or outlooks beneficial to the Palestinian cause in them. Qassem believes Abbas should relinquish leadership of the PA, since his term officially ended in 2009.

Palestinians' skepticism about solutions being found to resolve their current crises and to move forward in relations with Israel might well be justified given the absence of any apparent official policies in this regard and a region marred in bloody sectarian conflicts.