Palestinians create digital museum to promote their cause

A group of Palestinian youth and historians created a digital museum to prove the historical Palestinians’ right to the land of Palestine and to challenge the Israeli narrative. 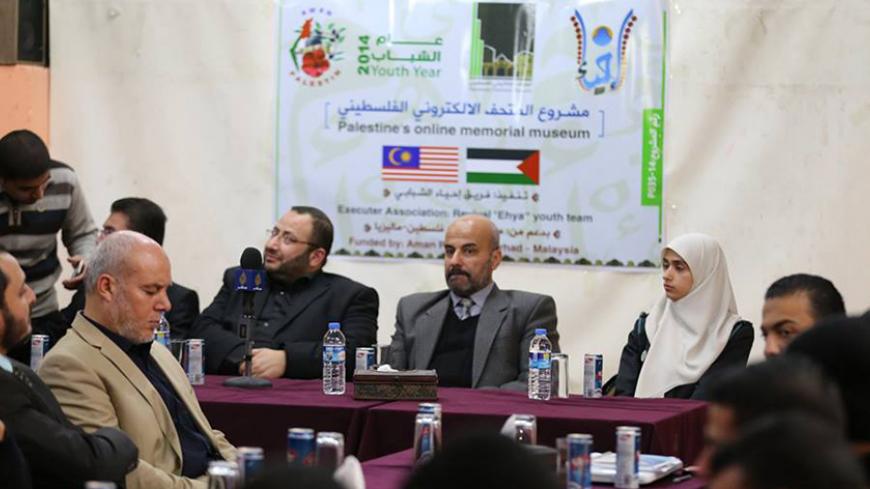 Palestinian activists and historians are trying to introduce the Palestinian cause to people around the world and show the Palestinian historical roots on this land, which has been witnessing an existential conflict with Israel since 1948. They are also seeking to increase international sympathy for the Palestinians.

Pal Team Revival, a group of youth volunteers, launched in January 2015 an English and Arabic website called Pal Narrative. It is a virtual museum that talks about the old Palestinian civilizations and Palestinian heritage, to prove the validity of the Palestinian narrative about the Palestinians’ rights to the land of Palestine. Palestine is defined by the three monotheistic religions — in the Torah, the Bible and the Quran — as the Holy Land.

Head of Pal Team Revival, Asem Alnabeh, explained that the website was a voluntary initiative by his team of 25 members, who specialize in different scientific disciplines, including engineering, history and translation.

“This virtual museum aims to connect youth around the world to the Palestinian cause by talking about the history of the Palestinian people, and generating sympathy and support. We also seek to prove that we, Palestinians, have the existential right to this land, and refute the Israeli claims that the land belongs to the Jews alone,” Alnabeh told Al-Monitor.

“The virtual museum is part of an important step in confronting the Israeli media that has become strong and pervasive around the world in promoting the Israeli narrative. We are trying to prove that this [Israeli] narrative is false and that it does not give the world an opportunity to become familiar with the true Palestinian history,” he said.

Alnabeh pointed out that the website was sponsored and funded by Aman Palestin – Aid for Freedom, a Maylasian foundation supporting the Palestinian cause.

The virtual museum illustrates the historical stages on the land of Palestine, starting with prehistoric times, Bronze Age, Iron Age, the Assyrian, Babylonian, Persian, Greek and Roman eras, Islamic Conquest, Ottoman Empire and the British Mandate — up until the Israeli occupation and the different stages of the Israeli-Palestinian conflict over this land.

The website also includes a section about the most important Palestinian archaeological sites, such as Saint Hilarion Monastery and Tall Rafah, and the Palestinian cities and the stages of their development and history of the Palestinian presence there.

“The site's content was written and audited by a group of Palestinian researchers and experts in history and archaeology, who oversee any new content added to the site. This is what gives the content its credibility,” Alnabeh said.

He pointed out that the team working on the website is seeking to launch two additional versions in Turkish and Spanish. “We have carefully chosen these languages; English is the most common language around the world, and the Turks and Spanish people show the most solidarity and sympathy with the Palestinian cause,” he said.

Turkish President Recep Tayyip Erdogan had expressed during his inauguration speech in August 2014 his full support for the Palestinians, saying, “The horrific scenes make it imperative for us to continue supporting the Palestinian people.” Meanwhile, Spain was one of the leading countries whose cities witnessed massive demonstrations in July 2014, in protest against the Israeli war on the Gaza Strip.

“History is considered an important front in the Israeli-Palestinian conflict, so we wanted to resist the occupation from this point as Israel tries to promote historical lies and attribute every Palestinian [aspect] to the Jews,” he said.

In March 2015, the team launched a Pal Narrative-affiliated application for Android phones, in an attempt to keep up with technological development so that a greater number of people who support the Palestinian cause could access the website.

History and heritage are major parts of the Israeli-Palestinian conflict, while the city of Jerusalem is currently on the front line of this conflict. Palestinians and Israelis are struggling to prove the eligibility of their historical presence on this land. Muslims believe Al-Aqsa Mosque is the first qibla (Arabic for "direction" — Muslims first turned toward Al-Aqsa when praying after migrating to Medina in 624; the qibla was redirected toward the Kaaba in Mecca after the Prophet Muhammad received a revelation) and the third of the Holy Mosques (Mecca, Medina and Jerusalem). Jews claim that the mosque is built on the ruins of Solomon’s Temple, which some seek to rebuild.

Abeer Ziad, Jerusalem-based archaeological expert and the former director of the Arab section for guidance at the Museum of History of Jerusalem (The Tower of David), supervised by Israel, accused Israel of falsifying historical facts and telling foreign tourists that Islamic sites in Jerusalem were old Jewish monuments.

She added, “Israeli tour guides in Jerusalem falsify facts and promote lies to foreign tourists [visiting] various archaeological sites. For example, they claim the monuments found near the Umayyad Palace in the Old City of Jerusalem — dating back to the era of the Umayyad Caliphate (661-750) — are Jewish artifacts thousands of years old."

But Palestinians are unable to conduct tests to prove the contrary, as Jerusalem falls under Israel’s administration. They contend themselves with arguing that these artifacts are located in palaces that date back to the Umayyad era in Palestine.

Ziad explained that Israel is seeking to Judaize all that is Islamic in Jerusalem, by giving a Jewish character to the Islamic monuments. She noted that in 2014 alone, the Israeli municipality in Jerusalem allocated a financial budget estimated at 4.5 billion shekels ($1.1 billion) to Judaize Jerusalem, through different means, including the establishment of the biblical gardens and the expansion of settlements.

Despite the importance of this historical conflict, whose course Palestinian activists are attempting to enter in order to prove the historical Palestinian rights on this land, all official efforts to support youth initiatives to address the historical Israeli narrative are almost completely nonexistent, and this allows Israel to take the lead in this conflict.