Meet one of Hezbollah's teen fighters

As more young Lebanese Hezbollah fighters travel to Syria, Al-Monitor spoke with one of these boys about their reasons for waging jihad and the training they go through before joining the fight. 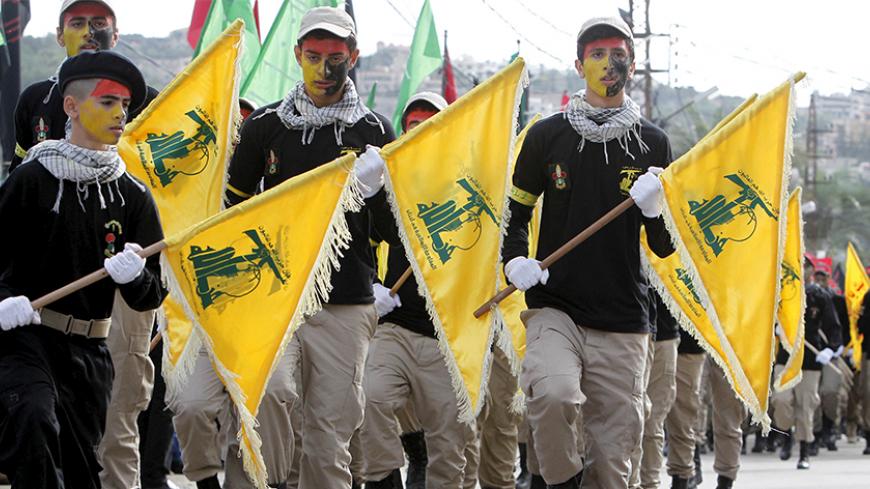 Lebanon's Hezbollah supporters carry the party's flag while marching at the funeral of three Hezbollah fighters who were killed while fighting alongside Syrian army forces, in Nabatieh, southern Lebanon, Oct. 27, 2015. - REUTERS/Ali Hashisho

BEKAA VALLEY, Lebanon — Since it erupted in March 2011, the Syrian war has seen heavy involvement by Lebanese Hezbollah, which has increased its presence there since 2013 to prop up the regime of President Bashar al-Assad.

Military sources close to Hezbollah estimate that the militant group may have deployed 7,000 to 9,000 fighters in Syria, specifically in areas around Damascus. The civil conflict has caused a large number of casualties among its ranks, with around 1,300 fighters killed in the last five years, according to the news website Ya Libnan.

In May 2015, the leader of Lebanese Hezbollah, Hassan Nasrallah, said in a speech that his fighters would expand their presence in Syria. With the increasing participation of Hezbollah fighters on various fronts from the north to the south of Syria, the militant group is relying more and more on youth from the Bekaa Valley, in south Lebanon and Beirut, the military sources told Al-Monitor on condition of anonymity.

These sources underline that Hezbollah is relying on younger recruits for several reasons, the biggest being that the party does want to focus all its resources on Syria and wants to keep some of its old guard for the protection of the southern front line in Lebanon.

Al-Monitor met with one of Hezbollah’s young recruits in the Bekaa Valley. He said he was on a brief break in Lebanon from deployment in Syria and spoke under the pseudonym "Abu Ali Karbal," as he is not allowed to talk to the press. The text of the interview follows:

Al-Monitor:  How old are you and how long have you been with Hezbollah?

Al-Monitor:  Why did you want to join the organization?

Karbal:  To wage jihad in Syria. It is my religious duty to fight there. It is the duty of every Muslim. It will also ensure my salvation after my death.

Al-Monitor:  Why do you want to wage jihad?

Karbal:  I have always been religious. As a child, I used to attend religious majlis [religion classes at the mosque], where they explained to us the duties of a good Muslim. I think I have been ready to die for a long time, and when the war in Syria broke out, it was clear to me it was a war of good against evil. The takfiris in Syria were attacking our holy sites, our Mouqadassat, which are our most sacred places, such as the Sayyida Zeinab pilgrimage site. We could not let that happen.

Al-Monitor:  Did you tell your parents you wanted to go and fight in Syria? Did they agree to their son becoming a mujahedeen?

Karbal:  No, I did not tell them initially and did not seek their permission. They were against the idea of me fighting in Syria when they discovered that I was training for war in Syria.

Al-Monitor:  Are many of your friends fighting in Syria? If not, do you encourage them to join the war there?

Karbal:  Yes, many of my friends are fighting there. Actually, from each village, there are dozens fighting. I do encourage my friends to fight in Syria; it is their Muslim duty. But jihad does not necessarily entail a military aspect. There is also "jihad al-nafs" [jihad against oneself]. Some people can only practice this last form of jihad. For example, if you are living abroad and you can’t fight, you can send money or aid to the resistance.

Al-Monitor:  What type of training did you receive from Hezbollah?

Karbal:  We are submitted to three trainings. The first is a religious training. We are taught about jihad and about the goal of the war in Syria, which is the protection of our holy sites. We are also taught to treat prisoners fairly, to avoid torturing them and not desecrate our enemies’ bodies. Our religion does not allow it. The second training lasts for 45 days and entails a physical training, during which we are taught fighting techniques as well as the use of weapons, such as the Kalashnikov, the PKC, the Dragunov and the equivalent of B7s, along with other weapons. The third part of our training includes short periods of deployment in Syria.

Al-Monitor:  How do you treat Syrian opposition fighters when you take them as prisoners?

Karbal:  We hand them over to the Syrian army.

Al-Monitor:  Where were you deployed? And where will you be deployed next?

Karbal:  In the Zabadani area. I cannot divulge where I will be deployed next.

Al-Monitor:  What is your current role?

Karbal:  I participate in battles intermittently, but my primary role is to follow my units and ensure they are adequately supplied with weapons.

Al-Monitor:  How big is your unit?

Al-Monitor:  Are the people in your unit all Lebanese or Syrians, or does it include other factions from other countries?

Karbal:  I prefer not to answer this question.

Al-Monitor:  What is the role of Hezbollah in this unit?

Karbal:  Hezbollah manages and leads military operations; we do the bulk of the work during battles. The Syrians are sort of our GPS; they tell us about the area, its topography and the people who live there. They also fight under Hezbollah’s orders.

Al-Monitor:  Do you trust the Syrians working with you?

Karbal:  Cooperation has certainly improved, but we do find double agents every now and then. We do not trust them 100%.

Al-Monitor:  What role do Iranians play in these battles? Have you interacted with many Iranians?

Karbal:  Personally, no. I know they play a role at a higher level; they are also involved in logistics, especially in the medical field. They have great doctors who have saved many lives.

Al-Monitor:  When Hezbollah talks about Syria, they say that the rebellion is mostly comprised of foreign fighters. How many foreign fighters have you encountered during battles?

Karbal:  Very few. There are some, but most fighters are Syrians.

Al-Monitor:  In Zabadani, where you were previously deployed, most fighters belonged to Ahrar al-Sham, which is a Syrian Muslim faction. Are you fine with fighting other fellow Muslims? Have you ever thought that these fighters might have justified grievances against the regime of President Assad?

Karbal:  No, those we are fighting are not true Muslims. You cannot be a Muslim and try to burn another Muslim’s religious site. They carry the Muslim declaration of faith, “There is no God but God,” and they burn down our mosques. This is not the work of a Muslim. During battles, you fire at them and they keep on coming; they are on drugs. I also don’t understand their grievances. President Assad is a very good and fair man. He gave his people free education, free medical care — what more do they want?

Al-Monitor:  Do you think your job is to protect Shiite holy sites or to prop up the regime of President Assad?

Karbal:  If President Assad wanted to crush the rebellion, he could have eradicated them on his own. But he is trying to do the right thing. There is an international plan to topple Assad because he is good, and because they want to break the Hezbollah-Iranian axis, but we are preventing that from happening.

Karbal:  When I am in Lebanon, I go back for the time of my respite to my normal life. I see my family, I hang out with friends. But I have to go back. … Also, what is happening in Syria today is a repetition of what happened over 1,000 years ago during the battle of Karbala, which ended with the killing of [Imam] Hussein, the grandson of the Prophet Muhammad. Imam Hussein was killed by the Umayyad Caliph, which heralded the schism between Sunnis and Shiites. We will not allow that to happen another time.