Discrimination and the lack of any hope for a two-state solution could push Arab-Israelis to join the uprising in the West Bank, much like the battle in 1947. 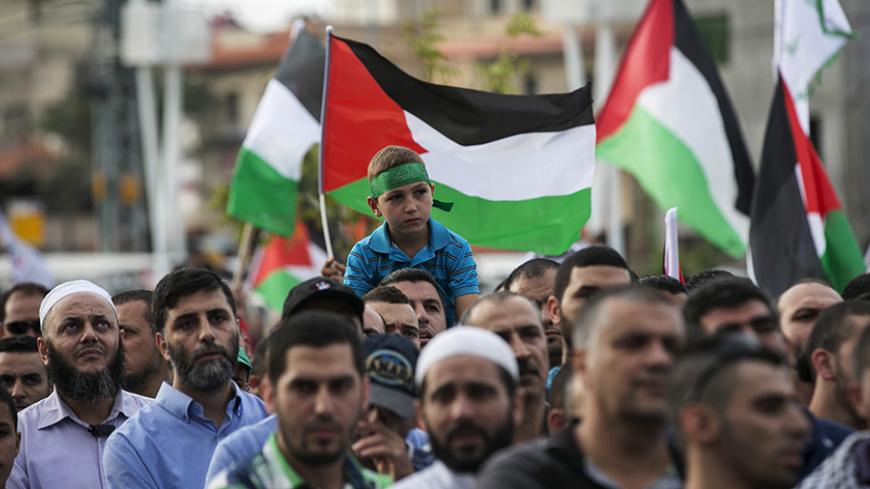 Arab-Jewish relations within sovereign Israel have reached an unprecedented crisis. Discrimination against Arabs and the lack of any hope for a two-state solution have pushed Arab-Israelis into the arms of their brethren east of the Green Line, fighting for independence. In some ways, this could provoke a return to the pre-Israeli statehood situation.

The Israeli government perceived the Tel Aviv terror attack of Jan. 1 as a strategic warning. Gunman Neshat Melhem was driven and inspired by nationalistic and religious motives; hence the dilemma in the Cabinet room must have been whether this was an isolated incident, or the beginning of Arab-Israeli involvement in a wider Palestinian national struggle against Israel. It appears the government was already worried about the latter: The day before the attack, the Cabinet had announced a 15 billion shekel ($3.8 billion) socio-economic development plan for the Arab sector.

Prime Minister Benjamin Netanyahu is worried and has every reason to be. Yet, this did not stop him from making racist incriminations at his Jan. 2 eulogy on Tel Aviv's Dizengoff Street following the attack. “I am not prepared to accept two states of Israel, a state of law for most of its citizens and a state within a state for some of them,” he said, equating the entire Arab-Israeli population with the attackers.

Netanyahu understands the need to tackle the significant socio-economic gaps between Israeli Jews and Arabs, yet, for fear of being perceived by his right-wing base as leaning toward Arabs, he conditioned the 15 billion shekel development plan to the Arab sector on greater legal compliance regarding building permits and firearm possession. Economic assistance in exchange for greater loyalty to Israel is his hidden motto. Still, the support for the Arab sector — to the degree that it materializes — is a far cry from the government's development investment in the rest of Israel, not to mention the West Bank settlements. Furthermore, Netanyahu appointed right-wing Likud Ministers Yariv Levin and Ze'ev Elkin, not exactly pillars of liberal democracy, to be responsible for establishing nationalistic conditions before any development resources are distributed to the Arab sector.

An official close to Minister for Social Equality Gila Gamliel, one of the sponsors of the economic assistance plan, told Al-Monitor that Gamliel sees equal opportunity for Arabs as a critical condition for Israel’s social stability. The minister is now concerned with the erosion of the assistance package.

Indeed, the inequality is blatant. It is the result of decades of discrimination only made worse during Netanyahu’s years in power. Among a population of 8.5 million Israelis, according to the Israeli Central Bureau of Statistics, 20.8% are Arab. Yet, according to the June 2013 report of the UK Task Force on issues relating to Arab citizens in Israel, Arab municipalities consist of only 2.5% of the total Israeli land. Since the establishment of the state in 1948, 700 new communities have been established, but not a single Arab community. Arab health-care and educational services are considerably less developed than such services for Jewish towns and villages, due to lack of governmental support. According to the same UK report, life expectancy of Arab-Israeli men is four years under that of Jewish men, and 3.2 years lower for Arab women than for Jewish women. In Israeli universities, 12% of undergraduates and only 2% of the academic staff are Arabs. The general economic situation is also poor: Although the Arab sector comprises 20% of the population, it only represents 8% of Israel’s gross domestic product.

The disenfranchisement of Arab-Israelis runs much deeper than the socio-economic dimension. At the root of the rift is the Palestinian-Israeli conflict, which challenges the identity of Arab-Israelis. By definition, they identify with their brethren under occupation on the other side of the Green Line. The challenge to their identity became even more dramatic with the complete halt in the peace process and by the Green Line becoming virtually irrelevant due to the government’s settlement policy. This identity crisis of Arab-Israelis, who more and more see themselves simply as Palestinians, is made worse by the rampant racism emanating from government rhetoric and legislation such as the proposed nationality law. In today’s Israel, an Arab man or woman is concerned about walking on the streets of many cities, for fear of harassment by right-wing hooligans or being questioned by the police. A young Arab man or woman will have a hard time finding a respectable job, let alone renting an apartment from a Jewish landlord.

The relative integration of Arab-Israelis into Israeli society, which seemed to improve during the government of Yitzhak Rabin and Shimon Peres in the 1990s, was one of the state’s biggest achievements. Currently, the socio-economic gap, prevalent racism and the de facto elimination of the Green Line have set Jewish-Arab relations on a dangerous course.

As long as there was a viable and realistic two-state solution process, Arab-Israelis were for the most part worried observers. Now that this option is buried, Arab-Israelis increasingly identify with the fate of West Bank and Gaza Palestinians, as well as with their struggle for independence. Those among the Arab sector who relate more to Islamic fundamentalism (such as the outlawed northern branch of the Islamic movement) identify with Hamas. Most Arab-Israeli members of the Knesset favor nonviolent resistance to the occupation. But there are some among the young Palestinian generation who are inspired by violent attacks against Israelis, which was the case with the “Dizengoff Street terrorist” of Jan. 1.

The writing is on the wall. If the current trend continues, especially without the possibility of a two-state solution on the horizon, we risk witnessing one day the Arabs of Galilee and the Negev colluding with Arabs of the West Bank and Gaza, in a combined national struggle for Palestinian independence: back to 1947.