Despite IS threat, Iraqi Kurdistan tries to lure tourists

After instability brought about by IS nearly destroyed tourism in Iraqi Kurdistan, the government still hopes to benefit from years of investment in the sector. 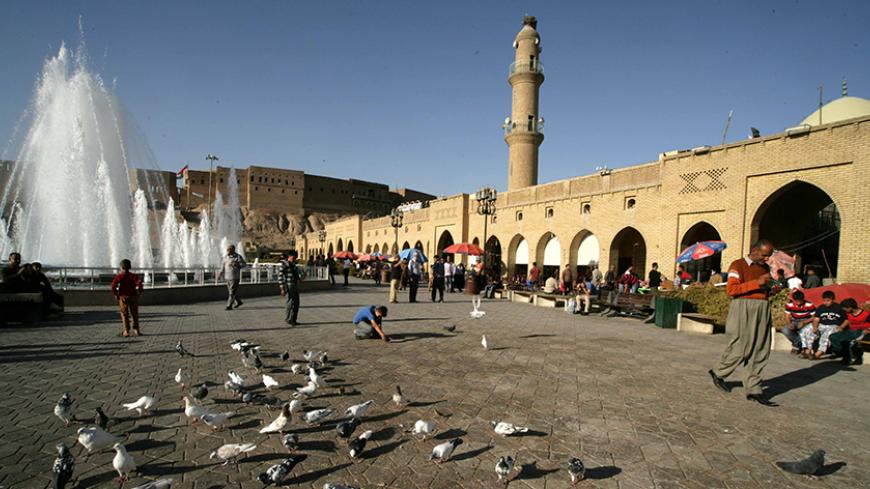 A picture shows the citadel and the city park in the center of Kurdistan's capital, Erbil, Iraq, Oct. 12, 2013. - SAFIN HAMED/AFP/Getty Images

Until the beginning of 2014, the Kurdistan Regional Government’s (KRG) fledgling tourism industry was growing at an impressive pace. Domestic and international investment was on the rise, and the region’s capital, Erbil, was celebrating its status as the 2014 Capital of Arab Tourism. However, come February, the Islamic State (IS) made rapid advances to the east and shocked the region by arriving a mere 45 kilometers (27 miles) from Erbil, prompting travelers and tour companies to cancel their trips. Despite a number of coalition military successes since then, the looming threat of IS — together with the consequent humanitarian crisis — continues to stifle the development of tourism in Kurdistan. So what does 2016 hold for a tourism industry in a region that for almost two years has had drastically fewer tourists?

In late December, KRG parliament Speaker Yousif Mohammed Sadiq gave a statement bemoaning the “failure” of the region’s economy in 2015 and arguing that “neglect” of Kurdistan's tourism industry had contributed to this disappointing result.

Sadiq has good reasons for raising the alarm. The success of Kurdistan’s economy has often been linked to its tourism sector, particularly as investment in the industry has been so high of late. Erbil’s Deputy Gov. Tahir Abdulla opened 2014 by announcing that the private sector had “applied to build $1 billion worth of hotels” and the General Board of Tourism was preparing to host 4 million tourists, of which just over 20% were international. Even as far back as 2007, a tourism stakeholder’s meeting was defined by its joint wish for the “Kurdistan Region’s economy [to] develop through the development of the tourism sector.”

The catastrophic decline in tourist numbers must therefore be seen from this perspective. Sarook Sarky, a student researcher at the University of Southampton, told Al-Monitor, “International tourism visitor numbers have dropped by at least 50% [since summer 2014], according to the head of the media department at the General Board of Tourism.”

Other unofficial estimates, such as that of Douglas Layton, co-founder of The Other Iraq Tours, are much lower. “The [IS] effect has been severe on tourism,” Layton admitted to Al-Monitor. “Tourism did not drop by 50% — it basically dropped to zero” in regard to international visitors.

Paul Craven of UK-based Steppes Travel agrees that the affect of IS activity has been significant. He told Al-Monitor, “IS activity generally and in the Kurdish region has led to enquiries drying up.” Security is of such importance to international travelers that the events of the past two years have even affected tourism in other counties, which seem guilty by association. Craven said, “People are now linking countries like Oman and Uzbekistan to areas they do not wish to travel to, associating them with ‘Islamic states’ and therefore uncertainty of security.”

An air of positivity following the retaking of Sinjar in November and upcoming plans to retake Mosul might suggest that things are looking up for 2016. But with thousands of refugees and internally displaced persons already stretching Kurdistan’s resources, Sarky acknowledged to Al-Monitor that tourism has necessarily become “a lower priority.”

Bayan Sami Abdelrahman, the KRG's high representative to the United States, is also realistic about the tourism nosedive being an outcome of a turbulent year. “It isn't surprising that tourism has slowed down,” she conveyed to Al-Monitor through a statement issued by her office, particularly with the KRG’s “responsibility of caring for nearly 2 million displaced people and refugees.”

So how are these stakeholders planning to address this situation? Layton insists that for any tourists who do wish to make the trip, security measures will be taken. “Of course, the turmoil down south does require adjustments. … Therefore, [our tour companies] do not visit any areas close to the borders that are in proximity to any potential violence,” he said.

Abdelrahman takes a similarly practical approach to the situation. Acknowledging that a cessation of hostilities may very well be a far-off prospect, she told Al-Monitor that she continues with the task of promoting Kurdish culture at home and abroad. Two Kurdish films have been released this past year, she noted, one even being nominated for an Academy Award. Abdelrahman has also helped Layton promote his "Kurdistan Tour Guide," published at the height of IS-bred turmoil in mid-2015.

The timing of the book launch may be interpreted as reflective of the Kurds’ refusal to be daunted by the IS threat. The Kurdish soldiers are known as peshmerga, "the one who faces death," and this attitude — one that is almost stubborn to the idea of surrender — has been widely used in Kurdish anti-IS propaganda. Layton told Al-Monitor, “[The tour guide] was sponsored by forward-thinking Kurdish corporations who, like us, wanted to send a message to the world that Kurdistan is not intimidated by IS.” The "Kurdistan Tour Guide" certainly represents hope for Kurdistan’s tourism industry, and its extraordinary promotion in the United States — the book was hand-delivered to every member of Congress — is an attempt to generate cultural understanding about the Kurdistan Region, even when getting to the region itself seems impossible. Abdelrahman sees such activities as her duty, telling Al-Monitor that it’s about being “prepared for when the time comes for tourists to come back.”

Yet, the fact of the matter is that regardless of how successful these efforts may be, the future remains murky. Sarky told Al-Monitor that the events of the past years continue to “undermine international confidence in the region as a destination,” concluding sadly, “Socio-economic and political developments in the region will not allow tourism to develop well.”