To keep up with its quickly growing tourism sector, the Iraqi Kurdistan Regional Government has begun offering loans to those wishing to build hotels and other touristic facilities. 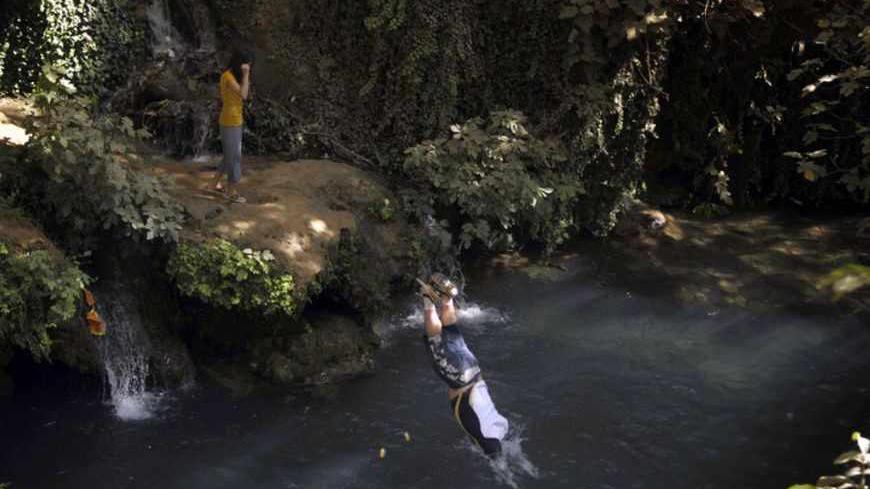 A resident jumps into water for a swim on Aug. 5, 2009, at Ahmed Awa tourist resort, known for its waterfalls, near Sulaimaniyah and near Iraq's border with Iran. Three American hikers had been taken into custody by Iranian border guards in the area the week before and were not all released until 2011. - REUTERS/Jamal Penjweny

The Kurdistan Regional Government (KRG) of Iraq has begun issuing loans to citizens wishing to launch tourism ventures, especially in areas far from the region’s major city centers, such as Erbil, Sulaimaniyah and Dahuk. This step aims to develop the KRG's growing tourism sector and attracting more tourists to the area.

The KRG has repeatedly announced the development of its tourism sector as a priority and a part of a strategic plan to encourage foreign companies to invest in this sector. The KRG has organized several international conferences to develop this sector, inviting foreign and local experts to attend. They have also invited investors and company owners to take a look at the investment opportunities available in the Kurdistan region.

Maulvi Jabbar Wahab, chairman of the General Authority for Tourism (GAT) in the Kurdistan region, announced a July conference in London to introduce the Kurdistan tourism sector to British companies, hoping to foster relations and cooperation.

In a statement to Al-Monitor, Nader Roustai, spokesman for the GAT at the KRG Ministry of Municipalities and Tourism, said, “This measure aims at developing the tourism profession among citizens, and strives to promote further interest in this sector and develop it through modern projects. This is why the KRG has announced that it will grant loans to citizens willing to carry out tourism projects in the region.”

Roustai said, “Mortgage banks in the Iraqi Kurdistan region will grant these loans and the GAT will issue licenses for projects, provided it specifies and oversees the lands allocated for the establishment of the projects."

These loans, Roustai noted, will be granted to those who wish "to build hotels, hotel apartments, places to accommodate tourists or tourist villages." More loans will be provided "to open restaurants or projects for summer tourism, or purchase vehicles to transport tourists, whether for tourism companies that bring foreign tourists to the Kurdistan region or for domestic tourism between the cities of the province.”

The KRG will only grant such loans to those wishing to establish tourism projects outside the large urban centers, which have witnessed the construction of several five-star hotels, large amusement parks and modern shopping centers.

Roustai explained, “One of the main goals of this project is developing the tourism sector in areas that are far from large city centers, all the while encouraging people there to use their land for tourism projects, given the presence of many springs and orchards that are suited to be turned into areas for tourists.” He stressed that “people in those areas do not have the financial capabilities to launch tourism ventures. This is why the government decided to support them.”

According to Roustai, the loans will be granted without interest, with actual loan amounts dependent on the project size. Roustai announced further measures to boost the tourism industry, including the KRG Ministry of Interior's agreement to assign 1,500 police to regional tourist and archaeolgical sites.

Mohammed Salman, an economic analyst at Erbil's Salahaddin University, told Al-Monitor, “There is no harm in supporting the tourism sector in the districts, counties and villages where there is tourist potential in order to revive tourism.” On the other hand, he said, if the aim of this project is just to pump money into those areas, then it will not achieve its desired goal.

On Nov. 20, 2012, Erbil held its second tourism conference. The Economic Council of Kurdistan, headed by KRG Prime Minister Nechirvan Barzani, tackled the status of tourism in the Kurdistan region and the necessity of applying a tourism development strategy.

In 2012, more than 2.2 million tourists visited the Kurdistan Region, and the tourism sector’s revenues reached $650 million. Iraqi Kurdistan boasts many touristic and archaeological sites that could be of interest to tourists, especially Iraqis.

Press sources said that the United Arab Emirates-based Emaar Properties will soon sign a contract with Faruk Group Holding, an investment firm in Iraqi Kurdistan, to develop a resort worth $2 billion (7.4 billion dirhams).