Egypt is planning urgently needed legislation to protect its citizens’ food supply and prevent the spread of disease. 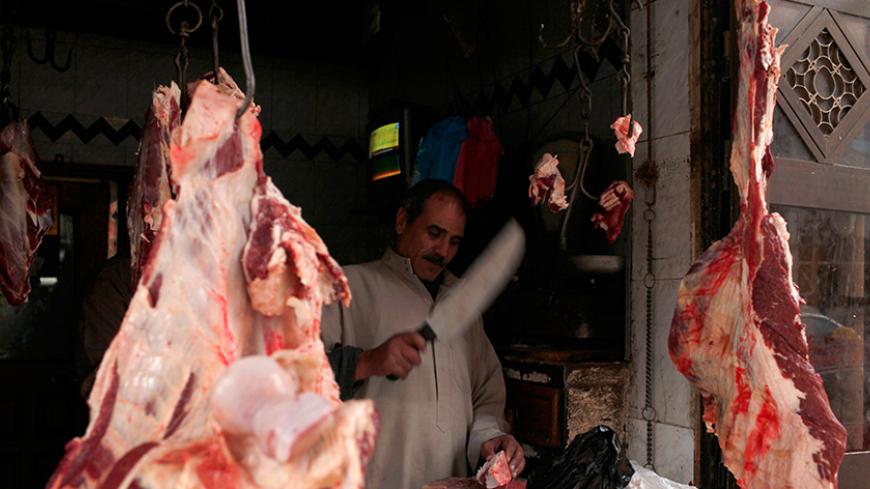 A butcher slices meat at his shop in the Egyptian town of Zagazig, Jan. 7, 2013. - REUTERS/Asmaa Waguih

CAIRO — Egypt hopes to crack down on “food fraud” and prevent epidemics by strengthening its safety regulations — quickly.

President Abdel Fattah al-Sisi has instructed authorities to form a committee to develop and pass a food safety law. Observers say the expedited order has rekindled hopes for a strong committee that monitors markets, enforces the law and prevents fraud. On Jan. 4, Sisi met with Abla Abdel-Latif, president of the Economic Development Board, and board member Mohsen Helmy to discuss several issues, including the committee.

The committee will be completely independent of all ministries and government parties, and will be directly linked to the president so it can perform its oversight role properly.

Hussein Mansour, head of the Egyptian Food Safety Authority — the unit tasked with forming the committee — talked about expectations for the committee.

He told Al-Monitor, “The main task of the committee is to monitor all food products, like dairy and meat, and all health-related issues. It will also conduct the necessary tests and laboratory exams to ensure food safety. The food products will be subject to tests to confirm their quality and production standards before being put on the market.

“The committee will also oversee the way that meat is cut, transferred and frozen, as well as its safety standards,” he said. “The situation in slaughterhouses is chaotic, and health requirements are almost absent. Moreover, the transportation of meat allows the spread of diseases. Some people transport the meat without covering it, which exposes it to car exhausts, soil, insects and microbes.”

Mansour admitted there is a crisis in Egypt’s food market in light of poor oversight. “This is an undeniable reality,” he said. “But following the president’s instructions to form a committee, we will now have a food safety bill. This will be the only law strictly related to food products in terms of monitoring, observation and follow-up.”

Currently there is a hodgepodge of regulations — some more than a century old. “These laws that date back to 1893 are archaic and unable to keep up with scientific developments, new monitoring methods or even the developed training programs,” Mansour said.

Based on official figures, there are 17 food safety monitoring bodies in Egypt, and there have been around 2,446 relevant pieces of food legislation since 1893.

Mansour added, “The new law will eliminate the problem of multiple parties conducting lab exams to test food products and will regroup them under one food safety committee allowed by law to carry out tests and analyses without referring to any other body. The committee would also enjoy full independence in implementing its job. This would forbid any attempts to deceive citizens in the quality of food products offered to them.”

There are 3,000 factories established according to the law and complying with standards and regulations governing food products, but they only produce 20% of food produced by factories. The rest of the factories often do not abide by any rules, laws or oversight regulations. This makes it harder for factories that strictly follow government regulations to compete and also poses a huge health threat to citizens.

Recently, the slaughter of donkeys has been on the rise at several farms and slaughterhouses. In June 2015, investigators in Faiyum province found a farm that slaughters donkeys and distributes them to butchers who sell them as food fit for human consumption. Investigators found 50 slaughtered donkeys ready for sale, while 300 others were waiting to be slaughtered.

Consequently, the General Authority for Veterinary Services, which is affiliated with the Ministry of Agriculture, announced a plan to monitor the number of donkeys and horses in the provinces. Thus, the authority will confront what the local press has deemed “the donkey slaughter mafia.”

Fathi Abdul Aziz, head of the monitoring and distribution department at the Ministry of Supply and Internal Trade, told Al-Monitor, “The ministry launches daily campaigns to detect any fraud in shops. It has not spared any effort to catch outlaws. Several cases of commercial fraud were caught after it was discovered that shops were selling expired meat to citizens.”

Abdul Aziz said, “When cases of commercial fraud are discovered, we file a report, shut down the place and refer its owner for public prosecution, by virtue of law No. 48/1941 combating fraud and deception.”

Article 10 of that law states that if the fraud is repeated, the contravening party shall be sanctioned by imprisonment for a period not less than five years and a penalty of 30,000-60,000 Egyptian pounds ($3,800-$7,700), or of a value equivalent to the amount of the goods involved, whichever is higher.

Sayyed Ahmad, a member of the Tourist Guides’ Union, told Al-Monitor, “Food contamination not only affects citizens’ public health and infects them with diseases, it also impacts tourism in Egypt. Some countries are warning their citizens who are planning to visit Egypt how to prevent diseases by avoiding food from unknown sources sold by street vendors or drinking unclean ‘potable’ water to avoid epidemics like hepatitis.”

Mohammad Sayyed Massoud, executive manager of the Egyptian Food Security Information Center, welcomed news of a food safety committee. In a Jan. 4 press release, he underlined the importance of facing “food fraud” and checking for compliance with food safety standards. He told Al-Monitor, “Food contaminants infect many Egyptians with diseases.”

He said that the food safety law needs to be enacted as soon as it is ratified by parliament, and that the president is pushing for the law to be implemented in the next few months.