Viral hemorrhagic fever is spread by contact with animals and can constitute a "public health emergency of international concern." 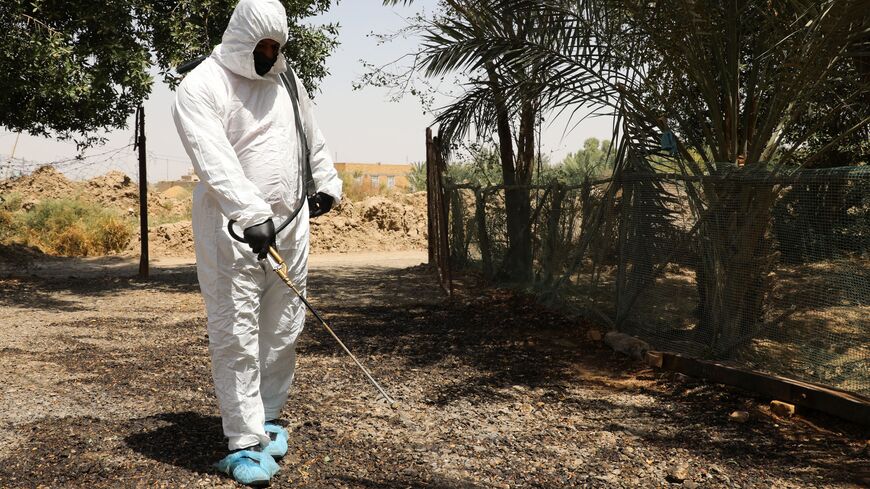 A worker from the health department disinfects the area around a house in the village of Al-Bojari in Iraq's southern Dhi Qar province, where a woman was infected with the haemorrhagic illness, on May 25, 2022, during the country's worst detected outbreak of the illness. - ASAAD NIAZI/AFP via Getty Images

Incidences of viral hemorrhagic fever (VHF) in Iraq are on the rise, and in many cases they are deadly. Several cases have been registered in the Kurdistan Region in northern Iraq, as the Veterinary Hospital Administration in Dhi Qar governorate announced on June 11 international action to eradicate VHF in the governorate in cooperation with the International Red Cross (IRC).

VHF spreads when people come in contact with infected animals or insects and can spread person-to-person. The disease can affect the cardiovascular system, and symptoms include bleeding or hemorrhaging.

To prevent another episode of VHF surge in Kirkuk, the Health Directorate removed animal pens from inside the city. In Maysan, a voluntary campaign to "introduce the importance of preventing hemorrhagic fever" was launched in markets and butcher and poultry shops as well as with fishmongers.

Ministry of Agriculture considered on June. 20, the lack of veterinary staff one of the most important reasons for the spread of hemorrhagic fever, noting that no new veterinarian had been appointed since 1989.

Waad al-Asadi, a butcher from Babylon, told Al-Monitor, “There is a clear decrease in the demand for meat, as people are scared of eating meat, and this has caused the market to stagnate and the trade in livestock and meat to stop.”

VHF constitutes a “public health emergency of international concern,” according to the International Health Regulations (2009), and over the past two decades, various VHFs have been reported in more than 12 countries.

However, the disease in Iraq is not new. The official spokesman for the Ministry of Health, Saif al-Badr, told Al-Monitor on June 12, “The disease in Iraq has been endemic since the 1970s, back when several infections were registered. However, 160 confirmed cases have been registered this year, including 26 deaths. The cases were concentrated in Dhi Qar, Maysan, Babylon, Muthanna, Diwaniyah and in the Kurdistan Region."

Badr said, “The Ministry of Health owns laboratories and mechanisms that help detect VHFs at an early stage, and it has extensive experience as far as treatment is concerned.”

He also noted that the ministry's role consists of treating cases as well as educating and spreading awareness, while the role of the Ministry of Agriculture focuses on pest control, detecting infected animals, and monitoring and controlling slaughterhouse methods.

He clarified that the transportation of livestock from one governorate to another is the responsibility of security authorities, the capital municipality and local governments.

Badr added that “the measures taken to fight random slaughter practices are below the required level.”

He said that the ministry is “organizing continuous programs to enhance the prevention of brucellosis, which is a highly contagious zoonotic disease, among other diseases that periodically affect livestock.”

Nayef said that “as soon as a VHF case surges, the ministry initiates large-scale operations to control ticks, which are the mediator of this kind of disease.”

He attributed the high number of VHF cases to “the lack of health awareness and random slaughterhouses in cities away from the attention of health authorities. Add to this the poor levels of hygiene in farms and animal breeding places, and the direct mingling of animals with breeders and their families.”

Nayef revealed that “the ministry has deployed teams across Iraq to combat diseases and educate educators and farmers about the seriousness of the disease and methods of its prevention.”

He stressed that the vaccine for VHF is currently not available around the world and that Prime Minister Mustafa al-Kadhimi instructed it to be purchased as soon as it becomes available.

Life Sciences lecturer at Al-Qasim Green University Ahmed Abed told Al-Monitor, “The disease is considered serious when the patient starts bleeding from openings in their body,” noting that “immediate treatment is necessary upon the onset of symptoms.”

Abed said that “the random spread of livestock in urban and rural areas, the spread of unlicensed slaughterhouses and the low level of veterinary services increase the number of cases.”

He called for “the sale of meat according to special health certificates and the cessation of slaughter operations not approved by health institutions.”

In a sign of interest in the surge in cases, the presidency of the Iraqi parliament called on May 9 for the isolation of “areas affected by VHF” and warned of “the risk of the virus spreading and the number of cases increasing.”

Salama al-Salihi from the Veterinary Directorate under the Ministry of Agriculture in Baghdad told Al-Monitor, “The symptoms of VHF are clear and severe. They start with fever, abdominal pain and fatigue, then bleeding starts from the eyes and nose. In severe cases, the body’s organs fail to function, which leads to death.”

Salihi believes that “the increase in temperature is a factor that contributes to the activity of the virus,” attributing the spread of the disease to “the primitive and unhealthy ways of transporting animals from one area to another, in addition to the power cuts that prevent people from keeping their meat cold enough as well as the adopted treatments.”

She also pointed to “the lack of sufficient veterinary staff to control ticks, as a very large proportion of veterinarians either retired or migrated, which led to the vacancy and closure of entire departments due to the lack of staff.”

Salihi referred to “the spread of animal husbandry in cities, and this is a dangerous negative phenomenon.”

She pointed to “the insecurity and the movement of breeders and farmers to live in cities with their animals away from any kind of accountability due to their affiliation with clans or influential forces and institutions.”

“My work allows me to clearly monitor the dumping of waste after slaughter. I also notice dead animals in rivers and public facilities,” she added.

In a country suffering from poor health services, where the absence of a law capable of deterring indiscriminate slaughter on the roads and in public squares, and where high temperatures are the reality almost throughout the year, chances of the spread of epidemic diseases remain wide.