Iran is being plagued by an increasing number of scandals involving violations of food safety standards. 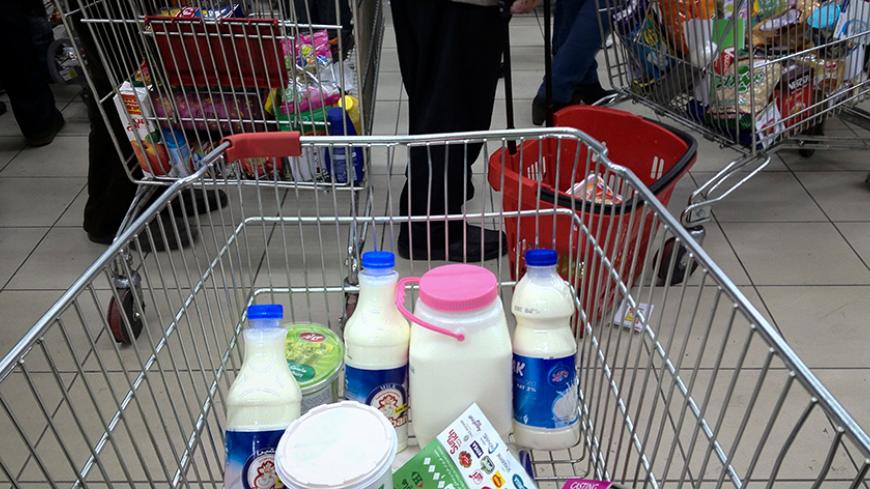 Food items are placed in shopping carts as customers stand in line to pay for their goods at a shopping mall in northwestern Tehran, Feb. 3, 2012. - REUTERS/Morteza Nikoubazl

TEHRAN, Iran — The latest in a string of questionable food quality calls by the government is bringing to light issues such as the mass supply of unsanitary food products, the violations of consumer rights and the lack of substantive legal recourse to deal with them.

At issue now is the Iranian Health Ministry’s decision to halt a production line at the country’s biggest bottler of mineral water — and the ministry's quick reversal of that decision.

On Sept. 21, Behrouz Jannat, director general of inspection and supervision at the Food and Drug Organization, announced that Damavand Mineral Water Company's production line in northern Tehran would be shut down because the company was not complying with regulations. Damavand, which holds 40% of Iran's mineral water market, is a joint venture with food and beverage giant Danone SA of Paris. Known as Dannon in the United States, the company's numerous brands include Evian water and Oikos yogurt.

Reports emerged that Damavand was continuing to distribute its products, which prompted Health Minister Seyed Hassan Qazizadeh Hashemi to personally intervene. He announced that in recent months, 12 mineral water production companies had received warnings. Of them, 11 promised to correct their errors, but Damavand had resisted. Hashemi said, “This company … does not have the right to distribute bottled water in the market.”

Less than one month later, Damavand was back in full swing. Rasoul Dinavard, head of Iran’s Food and Drug Organization, told reporters, “They were allowed to resume work under certain conditions, and they guaranteed [they would] follow through with their commitments.”

Hashemi said Damavand's water was contaminated with Pseudomonas bacteria. According to the World Health Organization website, the bacteria does not usually cause symptoms in healthy people; however, its presence in large numbers in bottled water can affect taste, odor and clarity.

A senior official at the Food and Drug Organization who spoke to Al-Monitor on condition of anonymity said, “Unfortunately, our organization has been under a great deal of pressure to announce that Damavand’s mineral water is once again suitable for distribution. Damavand is a colossal company and it’s not possible to guarantee that this bacteria has been eliminated in its bottled water in only two weeks. This is not to mention that the company never truly accepted that its products were contaminated with Pseudomonas. Therefore, how can it have corrected the situation?”

Damavand’s executive manager gave a press conference Oct. 18. Without accepting any responsibility for earlier contamination in the company’s products or explaining how its bottled water would become free of contaminants in the future, he said, “Cultural differences are one of the main elements that has become a headache for Damavand Mineral Water Company," referring to his dissatisfaction with how authorities handled the situation.

When it comes to reporting on consumer rights violations, there are no independent media outlets in Iran, only ones that voice the opinions of government officials. There are also no powerful nongovernmental organizations to ensure that consumer rights are respected by food producers. The most influential government organizations in this field are the Organization for the Protection of Consumers and Producers and the Society for the Protection of Consumer Rights, whose databases have provided no reports, analysis or even news about the contamination of Damavand’s mineral water during the past month.

Consumer rights violations have become a huge concern among ordinary Iranians since last summer, after Iran’s health minister announced that the country’s main milk producers were using palm oil in their products. This oil, and not the natural fat of the milk itself, made up most of the fat found in their dairy products. The head of the Health Ministry’s Office for Nutrition, Zahra Abdollahi, said palm oil has a saturated fatty acid content of at least 50%. Some authorities say the product is a suspected factor in high cholesterol and fat levels in the blood, and could eventually result in clogged arteries.

Other reports about food quality problems have surfaced recently. On Oct. 4, Alireza Jamshidi, head of Tazirat-e-Hokoumati, an organization within Iran’s judiciary, spoke about fake lemon juice being supplied to the market. “Seventeen factories were reviewed, and not one drop of natural lemon juice was found in any of them. What is interesting is that all of them had the seal of quality,” Jamshidi said. On Oct. 17, the Health Ministry reported that since the beginning of the current Iranian year, which started March 21, violations had been found in 53 lemon juice factories.

Iran’s Standards Organization — linked to the Ministry of Industry and Mines — is the country’s main body for quality control and regulates products in terms of health and hygienic requirements, granting them a seal of quality. However, the recent disclosures have brought this entity’s credibility into question. AsrIran — a news agency with ties to the Reformists — has accused the Standards Organization of lying and inconsistency in connection with Damavand.

In the past few months, there have also been reports about the mass processing of chicken containing lead in Tehran’s slaughterhouses, the unsanitary use of chicken paste in the production of sausages and salami, as well as contaminated sugar cubes.

Yet, it seems that these producers face no major legal repercussions. In an Oct. 13 news conference, the health minister complained about the low fines set for “food fraud," somewhere between 5 and 20,000 toman ($1.60-$6.60). “These fines are truly sad. And it’s been 30 years since these laws were put in place, and still they have never been reviewed,” Hashemi said.

Majid Haghani, a health and food safety analyst in Tehran, told Al-Monitor that complicated bureaucracy has prevented true offenders from being punished. However, he is still hopeful for the future and said, “We should realize that it’s been only in the past one or two years that social groups and independent media have become aware of the vital issue of consumer rights and are seriously following up on it. And even that is thanks to the disclosures made by the health minister and the media, and this is good news.”

In the absence of strict rules, he suggested, “One of the important things in the current situation is to form completely independent and people-oriented NGOs to monitor the quality of products. Then, social campaigns can be launched to sanction the violating producers and their products. In a situation where there is a legal vacuum, it is popular pressure that can strongly punish such producers.”