You won't believe how this Turkish village became rich overnight

Many impoverished villagers in Turkey’s mainly Kurdish southeast have made a fortune selling chunks of a meteorite after one exploded in September, while tax inspectors gripe about not receiving their share. 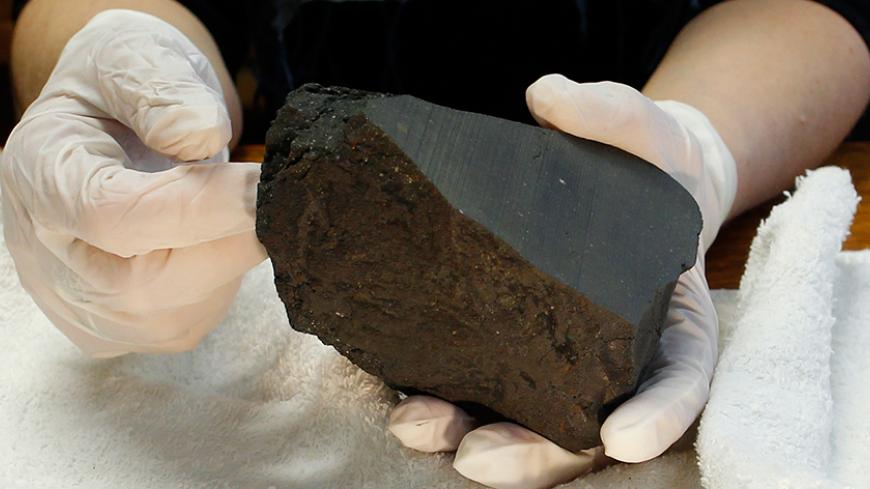 A worker at the French National Museum of Natural History holds a 1.3 kilogram (2.9 pounds) meteorite that is more than 4.5 billion years old, in Paris, Feb. 9, 2010. - REUTERS/Benoit Tessier

Life in the impoverished village of Saricicek in Turkey’s mainly Kurdish southeast changed overnight on Sept. 2, when treasure rained down from the sky. The sound of an explosion around midnight, followed by an illuminated sky, terrified the villagers but was soon to send them into rapture.

The mountainous village is in Bingol province, a region where Kurdish militants have long fought Turkish security forces. So residents thought that what they had seen and heard were rockets and bombs being fired in a yet another confrontation. But the owner of Saricicek’s only Internet cafe, Nezir Ergun, noticed black rocks falling onto his garden and soon realized a meteorite had exploded. He notified Bingol University and handed over the chunks to a team of scientists who rushed to the village.

Professor Iskender Demirkol, the head of the university’s physics department, got in touch with NASA, the Turkish Scientific and Technological Research Agency and Istanbul University. NASA’s Peter Jenniskens, a research scientist and expert on meteor showers, was soon in Saricicek. The researchers reportedly concluded that the 230-kilogram (507-pound) meteorite that fell in pieces on Saricicek originated from Vesta, one of the largest asteroids in the solar system, which NASA has observed from a spacecraft launched in 2007. The meteorite was of the “howardite” type, considered one of the most precious and named after meteoritics pioneer Edward Howard.

However, scientists were not the only visitors rushing to the village. Meteorite dealers from various countries, including Russia, Germany and the United States, also flocked to Saricicek. The villagers learned that meteorites were expensive objects traded globally among enthusiasts. Thrilled, they hit the fields and hills around the village, looking for the precious rocks. People coming from elsewhere also joined the hunt.

Judging by newspaper reports and interviews, many villagers did strike it rich by selling the rocks. Some have bought homes and cars; others have set up businesses or left the village to settle in big urban centers. Some lucky enough to recover the biggest chunks put their treasures on online auction sites, hoping to make a killing. The villagers have reportedly fetched some 1 million Turkish lira (about $350,000) so far, and some are still holding onto pieces as big as 4-5 kilograms (9-11 pounds) in weight.

Foreign dealers are said to have offered the villagers $30 to $60 per gram, while prices in online auctions range between $60 and $80. Geology.com, for instance, offers a “guide to collecting and the meteorite marketplace.” Other sites, including Meteorite, Meteorite Market and Aerolite, are also closely followed by meteorite enthusiasts.

But as the villagers rejoiced in their newfound fortune, unwelcome visitors also descended on Saricicek — from the Bingol Tax Department. The meteorite sales must be taxed, they said, and began meting out fines. The villagers were up in arms: How can taxes be levied on godsent rocks falling from the sky?

Saricicek was back in the headlines. Many sympathized with the villagers, and some argued that the meteorite trade was not taxable. Mehmet Simsek, Turkey's deputy prime minister in charge of the economy who was until recently finance minister, also joined the debate. He opened a poll over Twitter, asking, “Should the Saricicek villagers be taxed on the profits they made from selling meteorites?” Out of the 34,037 people who responded, 28% said yes and 72% no. Simsek announced that the villagers “will not be taxed because their profits are not of continuous nature.”

The villagers breathed a big sigh of relief. Ergun, the Internet cafe owner who first realized what had happened, emerged as the hapless hero of the hubbub, having handed all his findings over to NASA and the local university.

Still, Saricicek has been immortalized in meteoritic literature. The International Astronomical Union, which usually names meteorites after the nearest post office, made an exception for the impoverished village and named the one that fell on it the “Saricicek Meteor.”