Turkey makes progress on sealing Syria border, but is it enough?

Turkey’s granting the United States access to its military bases, among other factors, has muted US frustration at slow efforts to seal a remaining stretch of the Turkish-Syrian border to foreign fighters and oil smugglers. 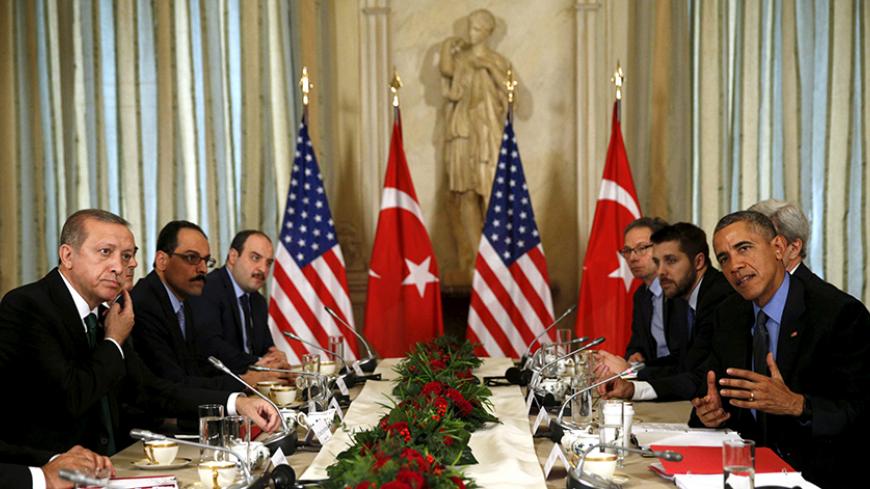 WASHINGTON — In July, Turkey granted the United States access to use its military bases to conduct air operations against the Islamic State (IS) and to station search and rescue teams. This may have insulated it from Western frustration at Turkey’s slow efforts to close off a remaining 98-kilometer (60-mile) stretch of the Turkish-Syrian border that US officials say is being used by foreign fighters to enter Syria and by IS to smuggle oil. In addition, the United States recognizes that efforts to seal the Turkish-Syrian border have been further complicated by the lack of sufficient Syrian rebel allies to hold land on the Syrian side of the border, by Turkey’s rejection of an autonomous Syrian Kurdish entity emerging on its border and by the humanitarian need to let Syrian refugees flee from the conflict to safety, according to diplomats and analysts.

“I have had repeated conversations with [Turkish] President [Recep Tayyip] Erdogan about the need to close the border between Turkey and Syria,” US President Barack Obama said after meeting Erdogan in Paris on Dec. 1. “We’ve seen some serious progress on that front, but there are still some gaps.”

“There’s about 98 kilometers that are still used as a transit point for foreign fighters, [IS] shipping out fuel for sale that helps finance their terrorist activities,” Obama said. “So we have been having our militaries work together to determine how a combination of air and Turkish ground forces on the Turkish side of the border can do a much better job of sealing the border than currently is. And I think President Erdogan recognizes that.”

While Turkey and the United States have different priorities in Syria, they functionally cooperate, Turkish analyst Henri Barkey said.

“Our priorities are very different,” Barkey, head of Middle East studies at the Woodrow Wilson International Center for Scholars, told Al-Monitor on Dec. 1. “For Turkey, the priority is getting rid of [Syrian President Bashar] al-Assad first, preventing the Syrian Kurds from consolidating and moving west of the Euphrates. [Combating IS] is No. 3 on their priorities.”

“Whereas for us [the United States], it is reversed,” Barkey continued. The United States’ top concern is combating IS, “Assad is No. 2, and we don’t worry about the Kurds.”

“The thing with Turkey and the US is that, [even as] the two sides have been diverging, at the same time, they cooperate,” Barkey said. “The Turks have allowed us to use four bases, Incirlik plus three more; that is quite important. Because it allows us to put search and rescue people [near the combat theater], which means we can put troops into Syria and rescue them. It opens up more options.”

“The Turks did that only because they needed to stop the deepening of [the US] relationship with [the Syrian] Kurds,” Barkey said.

The main reason why the task of sealing the remaining stretch of the Turkish-Syrian border is so slow is that the US-led alliance does not have a sufficient number of moderate Syrian rebel allies across the border to hold the land that they would clear from the air, said Soner Cagaptay, a Turkish expert at the Washington Institute for Near East Policy. Turkey has insisted that the Syrian Kurds not move to hold land west of the Euphrates, and the United States has apparently agreed. Given the constraints, both Turkey and the United States seem to have agreed to conduct operations more piecemeal, he said.

“The reason why they go slow is not because of disagreement on airstrikes and joint cooperation between the US and Turkey … to take out [IS] positions across the border,” Cagaptay, who directs the Washington Institute’s Turkish research program, told Al-Monitor on Dec. 1. “It is who will be there to hold onto the areas the day after.”

“The allies want to go slow and piecemeal,” Cagaptay said. “They don’t want to rush to take 60 miles and then have a 20-mile area fall back into the hands of [IS]. … The ground forces are not there to secure this area, that is why [action to clear it] is delayed.”

“There is no moderate headquarters that Washington and Ankara can call and say, ‘Can you please take over that village if we clear it from the air,’” Cagaptay said.

In addition, for the Turks, the Syrian-Kurdish Democratic Union Party (PYD) “crossing the Euphrates is a red line for Turkey,” Cagaptay said. “Turkey will not cooperate and open its air bases to the US if the PYD crosses west of the Euphrates.”

Moderate Syrian Arab rebel groups that could hold the land “are much stronger in the south [of Syria] than in the north,” Cagaptay said. “The north has more bad apples. The south has a significant presence of moderate nationalists. In the north, the moderates are incredibly fractured. … That is probably why the operation to close the cordon is very piecemeal and slow.”

By closing the remaining stretch of the Turkish-Syrian border, Turkey may also be trying to leverage action for the United States to implement a partial no-fly zone and put more pressure on Syria’s Assad, according to James Jeffrey, former US ambassador to Turkey and Iraq.

“Turkey’s position on closing the last 98 kilometers is for the US to get serious about a no-fly zone and put some more pressure on the Assad regime,” Jeffrey, now a senior fellow at the Washington Institute for Near East Policy, told Al-Monitor.

But neither the Turkish nor US militaries is on board for a Syria no-fly zone, Jeffrey notes. “The Turkish military has never been enthused about any Syrian operation,” he said. “That said, if Erdogan tells them to go in with the US and some international cover by the UN or NATO, they will go in.”

“The US military … is very nervous about any kind of commitment,” Jeffrey said.

“The Turks would like to use the 98-kilometer stretch to create in their mind a no-fly zone, where they could place the Turkmen,” the Wilson Center’s Barkey said. Their idea may be “to prevent the Kurds from having contiguous territory on the [Syrian-Turkish] border.”

But a no-fly-zone against IS won’t work, Barkey said.

“[IS] doesn’t have air power,” Barkey said. “They can always infiltrate people into that territory. A no-fly zone means nothing. But the Turks insist on this.”

In addition to the use of Incirlik Air Base, which was announced in July, Turkey has granted access for US aircraft to three additional Turkish military bases, a Turkish military analyst, speaking not for attribution, told Al-Monitor. The Malatya, Diyarbakir and Batman bases have been opened for US aircraft for about one and a half months, the analyst said. Officially, access to those three bases is not for operational use, only maintenance and emergency landing, he said. But given the volume of aircraft sorties, he expected that they could be used for operational purposes, particularly Diyarbakir, where US airmen have been present since the beginning of November, he said.