Media activists in Deir ez-Zor face daily death threats by the Islamic State, but the danger is not stopping many of them from documenting what is happening in the Syrian province. 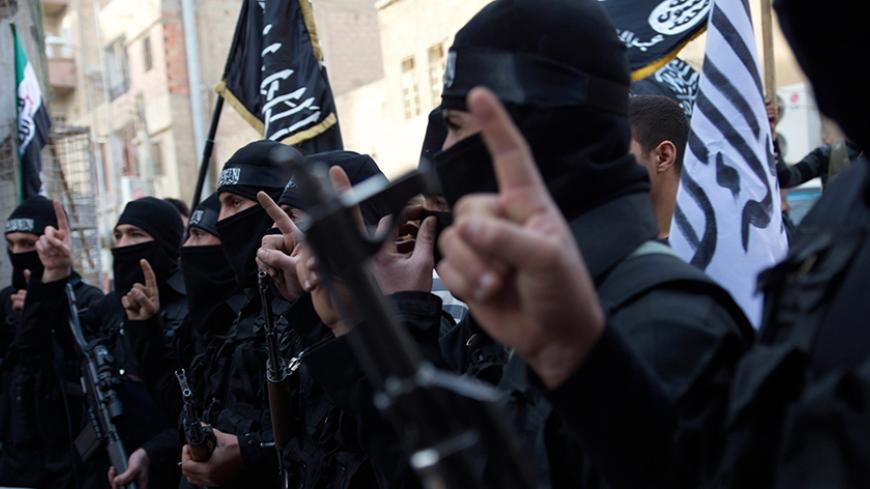 Members of an Islamist group hold their weapons during a protest against Syria's President Bashar al-Assad's regime in Deir ez-Zor, Feb. 25, 2013. - REUTERS/Khalil Ashawi

Key figures tend to be found and targeted there more than in the capital of the transnational jihadist enterprise, Raqqa. The mastermind behind the Paris attacks, Abdelhamid Abaaoud, was reportedly IS’ “emir of war” in Deir ez-Zor prior to returning to Europe.

Tunisian national Abu Sayyaf, a financier and senior figure in IS’ illicit oil and gas activities, was killed in a US raid there in mid-May and his Iraqi wife Umm Sayyaf was captured. The former local IS governor of the Deir ez-Zor province, Amer Rafdan, was killed by a coalition airstrike in northeastern Syria in July.

Meanwhile, civilians unable or unwilling to leave the area continue to suffer atrocities committed by “several sides,” one activist with family members still living there told Al-Monitor. Like most of those who spoke to Al-Monitor, he asked that his name be withheld for security reasons.

When the Russian airstrikes started in Deir ez-Zor in November, there were reports that vast numbers of civilians were being killed. Over 50 people were reportedly killed Nov. 5 in a popular market in Albu Kamal, near the Iraqi border.

Internet access is tightly restricted by IS, and sometimes blocked entirely for weeks at a time. One man, whose family remains in IS-held Deir ez-Zor but who works in the Gulf region, told Al-Monitor in Turkey that an Internet cafe run by a family member who secretly opens it at night at specified times is the only way he can speak briefly to his wife and children, whom he cannot afford to smuggle out.

A media activist from the same IS-held city in eastern Syria who is now living in southern Turkey told Al-Monitor that a conversation with his uncle, who was speaking from an IS-territory Internet cafe, had been abruptly cut off months ago. He had later learned that his relative had been arrested and not been heard from since.

Nevertheless, media activists continue to find ways to convey information abroad. One who goes by the name Abu Mujahed remembers well the smuggling route that he used to take between the city of Deir ez-Zor and the surrounding area, trying to gather information and send it to international media outlets in the first years of the uprising against the Syrian regime “to show the world what was happening.”

He told Al-Monitor, “I would spend three days in the surrounding area,” which was controlled by opposition forces, “and four days in the regime-controlled city” of Deir ez-Zor. He added, “Injured people were also taken out through that route, which took several hours, and many of them didn’t make it. Some died in front of my eyes.”

Though he was born in Damascus, his family was from the Deir ez-Zor region and he went back there after spending two months in prison for involvement in protest activities in 2011. In the subsequent years, he would grow to know many of the local rebel commanders and the area very well. Later, he was forced to flee to southern Turkey after IS took control of most of the region, but he continues to run a media campaign that took on the name “Deir ez-Zor Is Being Slaughtered Silently,” in a nod to the better-known “Raqqa Is Being Slaughtered Silently.”

Staffed by five volunteers in Turkey and 20 inside IS-held areas, DBSS regularly speaks to media outlets and human rights organizations and maintains Facebook and Twitter accounts in addition to a website that has been hacked repeatedly and is down at the time of this writing.

On whether Russian airstrikes were hitting IS targets, he said, “If you hit a market and kill 50 people, a couple of them are bound to be IS guys,” including IS police, “but most were civilians.”

When asked about the most important information that the group has managed to gather, Abu Mujahed noted papers on hundreds of Shaitat tribe members killed by IS and information about an IS leader who arrived in Germany in September. After informing the German government and posting information about the jihadist leader on the website, he said that he received death threats and that he now prefers not to provide further details due to security risks.

On Oct. 30, one member of RBSS was found dead with his throat cut alongside the body of one of his friends in Urfa, southern Turkey. The Committee to Protect Journalists has called on the Turkish authorities, who have not immediately commented on the incident, to conduct a thorough investigation. Many journalists and media activists have disappeared or been killed inside Syria, but the targeting on the Turkish side of the border has heightened security concerns.

Another media activist group from eastern Syria that requested anonymity due to security reasons includes a man who used to fight with a Free Syrian Army group led by Saddam Jamal, who later joined IS. Others working with the former rebel fighter have relatives in Jabhat al-Nusra, which fought against IS in the area prior to a split that saw some of them joining IS and others forced to leave for Daraa, where many remain.

The contacts that they have made over the years and continue to maintain enable them to document atrocities that would otherwise remain unknown. In a meeting with Al-Monitor in August, members of the group said that it had about 70 people inside Syria, including 13 women, that pass on information from the Deir ez-Zor, Raqqa, Hasakah and Palmyra areas.

“The most important thing is to provide verified information,” members of both groups stressed to Al-Monitor, despite the risk that this activity entails.

“And to have an archive for the future,” Abu Mujahed added. He said that he was considering a temporary halt to posting online “since the world knows what is happening in Deir ez-Zor. They just aren’t doing anything about it.” He said he would continue his documentation work through sources inside.

The risk remains extremely high. Recently, two more media activists caught by IS in Deir ez-Zor have been publicly executed, he noted, one shot and one blown up using explosives.