There are various proposals to amend Israel legal policies on divorce as citizens raise demands for greater nuance in child custody policies and alimony arrangements. 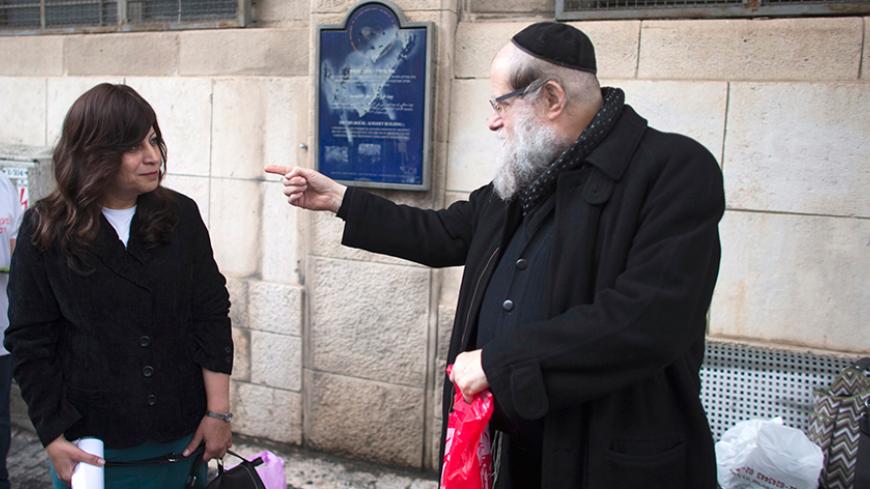 An ultra-Orthodox man points as he speaks to a member of Israel's first ultra-Orthodox Jewish women's party B'Zchutan during a protest outside a rabbinical court in Jerusalem, March 4, 2015. - REUTERS/Ronen Zvulun

One of the initiatives, which failed in the Knesset by a single vote Nov. 3, was yet another attempt to revoke through legislation the custody provision for children under 6. This provision stipulates that children of divorced parents are to automatically stay under the guardianship of the mother up to the age of 6. In practice, if one of the children of divorcing parents is under that age, the mother may be granted full custody over his older brothers and sisters as well. Thus the children remain in the mother's custody as they grow up so as not to change the arrangement they are accustomed to.

The other initiative is a new regulation by the Chief Rabbinate that states that following a divorce, child support shall not be automatically imposed on the father alone — the way it is done today, in accordance with the Jewish law — and that the mother's financial situation shall also be taken into account. Another bill has been submitted by coalition Knesset members calling for child support liability to be determined according to financial considerations, among other factors, rather than on the basis of gender alone.

Supporters of the amendment of the custody provision cite a Knesset report that found that policies like the provision's have become virtually unknown throughout the Western world. Indeed, provisions like Israel's have been repealed in all the countries surveyed in the study (Australia, United States, United Kingdom, Denmark, New Zealand, Spain and Canada), and there, the mother is not automatically granted custody over children following the parents' divorce.

"Under the Jewish law, a child under the age of 6 should be in his mother's custody, and in my opinion, that's the way it should be," Moshe Aosditsher, a family law attorney and the former head of the Jerusalem Religious Council, told Al-Monitor. "Having dealt with numerous divorce cases, I can say this is also ideal in terms of the child's interests. On the other hand, the world has greatly advanced, and nowadays, men are far more involved in child-raising than ever before, while women often choose to pursue a career. Thus, I personally think that there is room to reconsider the issue of the mother's custody of the child, and to examine each case on its merits."

Attorney Tziporet Schimmel, legal adviser to the religious-Zionist women's organization Emunah, categorically rejects the proposal. "We do not want to see a situation where cases are examined on an individual basis, as this would be contrary to the principles of certainty and stability for the children," she explained in a conversation with Al-Monitor.

Schimmel said that while she opposed the total revocation of the custody provision, she did agree that certain changes to the current situation were called for.

At the same time, Schimmel flatly rejects the recent initiative of the Chief Rabbinate regarding the issue of alimony. "It is interesting to note that the rabbinical courts, where the state of women's rights is still far from ideal, have all of a sudden decided to embrace the cause of equality when it comes to alimony, of all issues," she said sarcastically. "It is a classic example of putting the cart before the horse. Women are still poorer than men; they earn less than men and are significantly more socially disadvantaged. I would like to see the courts acting to promote equality in far more important arenas before they advance supposed equality measures at the expense of women. Thus, for instance, the rabbinical courts hardly apply the sanctions stipulated by the law against recalcitrant husbands refusing to grant a divorce. The rights of women whose cases are heard by the rabbinical courts are often violated and the alimony payments they are awarded by these courts are lower than those granted by the civil courts. Furthermore, too little has been done to integrate women into key positions in the Rabbinical Courts Management."

On the other hand, Aosditsher argues that if women demand equality, they cannot expect to be selectively granted "convenient equality" when it suits them.

"Today women demand, and rightly so, full integration in all areas of life; they seek equality in every job function and in any social position. But what about gender equality when it comes to liability for child support?" he wonders. "There are women who earn more than their spouse, while the father, who works hard but nevertheless can barely make ends meet, is willing to look after the children. Why should the father be discriminated against just because of his gender? And how does it fit with the desire for equality?"

The argument raised by Schimmel concerning the as-yet vulnerable status of women in the rabbinical courts and in society in general is no doubt at the core of the objection to the proposed amendments. In many past cases, although less so recently, when a couple decided to split up, they would race to file first in their preferred jurisdiction. In Israel, the divorce process is solely in the hands of the rabbinical courts. But there are two venues in which the issues involved in divorce are discussed: the courts for family affairs and the rabbinical courts. Men usually opt for the rabbinical courts, where they enjoy a certain advantage on some specific issues, while women prefer the civil family courts, whose rulings are usually in their favor.

The rabbinical courts tend to award divorced mothers relatively low alimony payments compared with those granted by the civil courts. In accordance with Jewish law, the capital and assets accumulated by a man in the course of marriage are to remain in his possession in the case of divorce. However, under the civil code, each side is entitled to an equitable distribution of wealth and assets. Aosditsher emphasizes that in recent years, the gap between the rabbinical courts and the civil courts has gradually narrowed — not by any initiative on the part of the Chief Rabbinate, but rather as the Supreme Court has obliged the rabbinical courts to rule in accordance with Israeli civil law, which calls for an equitable distribution of wealth and assets between the spouses.

The disputes between men and women over alimony and custody are a struggle for money masquerading as a struggle for gender equality. For instance, joint custody by both parents over the children could result in reduced alimony payments to the mother. Hence the claim that quite often men seek joint custody to reduce their child support payments.

It is generally agreed that the current state of affairs with regard to custody and alimony payments is at times biased against men. Then again, some women's organizations argue that only when men and women are accorded equal rights in all areas will it be possible to demand and enforce equality on the issues of custody and child support.