Who kidnapped Hannibal Gadhafi, and why?

The mysterious kidnapping of Hannibal Gadhafi in Lebanon has raised numerous scenarios about the motives behind the operation. 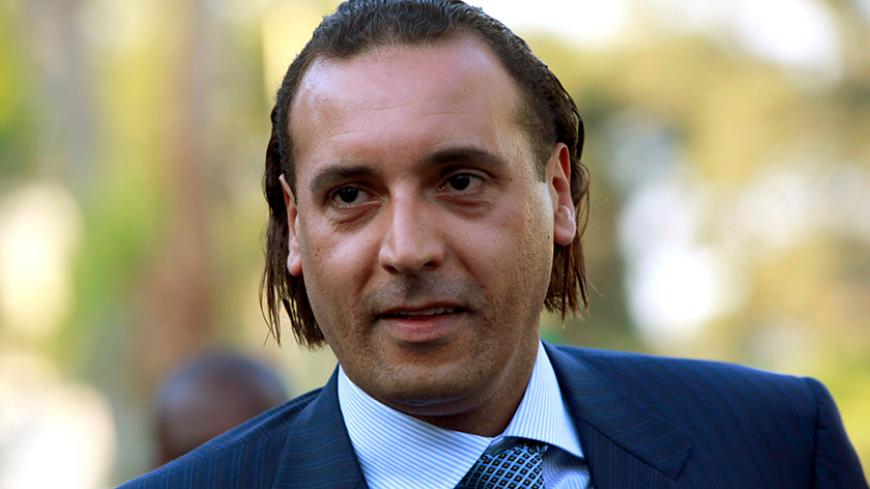 BEIRUT — On Dec. 9, Lebanon became the scene of a strange kidnapping that continues to unfold as its machinations and motives are subjected to a plethora of questions.

That day, news spread that an armed group had lured Hannibal Gadhafi, 40, the fifth and youngest son of late Libyan leader Moammar Gadhafi, from Syria, where he lived, to the Lebanese border, where he was kidnapped. A few hours later, a video surfaced in which he said his kidnapping was linked to potential information he was thought to have about the August 1978 disappearance in Libya of Lebanese Shiite cleric Imam Musa al-Sadr and two companions, Sheikh Mohammad Yacoub and journalist Abbas Badreddine.

Two days after the video aired, the media in Beirut announced that the kidnappers had contacted the Lebanese Internal Security Forces’ Information Branch and arranged to hand over Gadhafi to them. The oddities did not end there.

Despite Gadhafi having been a toddler at the time Sadr and his aides disappeared, Lebanese judicial officials filed charges Dec. 16 accusing him of withholding evidence related to the Sadr case. A few hours later, the Syrian government submitted a formal request for his extradition on grounds the former Libyan official had been granted political asylum in Syria, where he had been living.

Lebanese Justice Minister Ashraf Rifi quickly rejected the proposal, arguing that Gadhafi was not a Syrian citizen and was not wanted by the Syrian judiciary, which invalidated the extradition request. No sooner had Rifi made his decision known than a new twist emerged in the case.

Gadhafi’s lawyer, Bushra al-Khalil, claimed Dec. 16 she had information implicating Rifi himself as having a role in Gadhafi’s kidnapping. She said the information included the names of the kidnappers, whom she did not identify, but against whom she would be filing suit.

In yet another turn of events, on Dec. 17, Hassan Yacoub, a former Lebanese parliamentarian, was detained pending investigation into his alleged role in the Gadhafi kidnapping. Yacoub is the son of Sheikh Yacoub, who disappeared with Sadr, which suggests that Hassan Yacoub's supposed role in the kidnapping was perhaps motivated by revenge or to obtain information from Gadhafi concerning his missing father and Sadr.

Sadr's disappearance in the Libyan capital led to turmoil in Lebanese circles and strained relations between Beirut and Tripoli during Gadhafi’s tenure. Although Hannibal Gadhafi was born in 1975 and therefore was only 3 years old at the time, a Lebanese security source told Al-Monitor that the younger Gadhafi might have a treasure trove of information about incidents that occurred during his father’s reign, including Sadr’s disappearance.

The source, who requested anonymity, recounted that Hannibal Gadhafi had been a member of the Libyan regime and served from 2000-2004 as adviser to the Central Security Committee. This position presumably gave him access to privileged information during his father’s rule.

Ali Yacoub, brother of the currently detained Hassan Yacoub, seconded such suspicions. Yacoub told Al-Monitor his brother's arrest was not based, in his opinion, “on security or judicial data; rather he was arrested because of foreign and domestic internal interference.”

The security source added that Sadr's disappearance might not be the only motive behind Gadhafi’s abduction. Another possibility involves the fate of huge amounts of money the Gadhafi family is rumored to have smuggled out of Libya in the waning days of the regime. The rumor would give any number of factions reason to kidnap Gadhafi for information about the money's whereabouts.

A third possibility, according to the source, relates to Hannibal Gadhafi playing a current or future role in the ongoing power struggle in his home country. The source noted a possible connection between the kidnapping and negotiations in Morocco among some 80 figures from warring parties in Libya. The negotiations led to the Dec. 17 signing of an agreement to form a new government. The source said Lebanese authorities are not concerned about the Libyan negotiations, but the timing of the kidnapping left people involved in the case to wonder about a possible link.

Furthering suspicions was Damascus’ swift extradition request and the interest expressed in the case by Egyptian and Moroccan officials, who contacted Lebanese authorities and wanted to be kept abreast of Gadhafi’s status following his arrest. Due to their common border, Egypt and Libya have shared political and security concerns, especially with the presence of radical forces in Libya, not to mention economic interests due to the large number of Egyptians working in Libya. Morocco, as noted, had hosted the warring parties negotiating the agreement on a Libyan government.

Khalil, Gadhafi's lawyer, told Al-Monitor that her information indicates “some Arab countries contacted Lebanese officials" about the case. She did not rule out the possibility that the contacts were made in an effort to resolve the case, "as it concerns these countries.”

The case continues to lend itself to three distinct lines of analysis and speculation, ranging from a Lebanese motive related to the Sadr disappearance to the mystery shrouding the Gadhafi fortune to Libya’s political future. Any of these possibilities could gain credibility in the coming days, along with Hannibal's fate, or remain mysteries if he is released to another country.