The radicalization of Israel

The extremist discourse between the political right and the left has drowned out the Israeli mainstream. 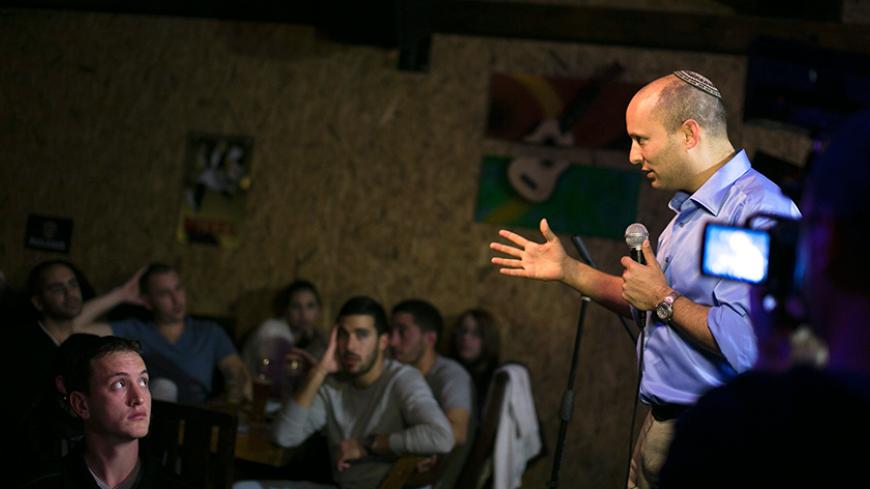 Naftali Bennett, head of HaBayit HaYehudi, campaigns at a bar in the southern city of Ashdod, Dec. 27, 2012. - REUTERS/Amir Cohen

Prime Minister Benjamin Netanyahu emerged satisfied from his Nov. 9 meeting with US President Barack Obama in Washington, but his coalition partners made sure to dampen his enthusiasm. At the meeting, Netanyahu had spoken about his commitment to a two-state solution. HaBayit HaYehudi Chairman Naftali Bennett, in competition with Netanyahu for right-wing voters, considers the concept illegitimate. Instead, Bennett supports the partial annexation of the occupied territories to Israel. “When the prime minister supports the creation of a Palestinian state, that is not a right-wing government,” Bennett reportedly told a gathering of party activists.

Bennett is not alone in his thinking. Some members of Netanyahu’s own Likud feel the same way. If, in the past, the political camps were divided over the question of how to realize a two-state solution and whether a trustworthy partner existed on the Palestinian side, today anyone who says the phrase “two-state solution” is viewed as a left-wing extremist by those on the right. This exemplifies the radicalization of Israeli society.

The public discourse in Israel leaves the impression that the society is divided between the two extremes on the right and the left, with an ever-widening ideological chasm between them. Nevertheless, there is a silent majority of citizens whose mouths remain shut, their voices absent from social networks and the public space — the Israeli mainstream, the centrists.

“The range of what is permitted and forbidden to be said on the social networks has shrunk greatly since Operation Protective Edge,” said Karine Nahon, an information politics expert at the Interdisciplinary Center in Herzliya and the University of Washington. “In my eyes, the networks are the looking-glass of reality. There are some reflections of this, for example, in the call to dismiss people from their jobs as a result of things they write on the networks. We have also seen the seepage of violence from the networks to the streets. During the Protective Edge campaign, right-wingers went to demonstrations against the war and hit protesters.”

According to Nahon, most people hid anonymously behind their keyboards before the campaign in Gaza, but today many pen their invectives while revealing their names along with photos of themselves, sometimes even with their children. “It began with Operation Protective Edge but deteriorated further during the [March 17] elections and now during the current wave of terror. Everyone attacks everyone else, from right to left and vice versa. But we need to remember the bottom line — that we’re only talking about a few tens of thousands of vocal civilians, some of whom may even have phony profiles. That’s not a lot, but on the networks it creates the impression of a huge mob.”

So where is everyone else? The only place where the voice of the moderate majority has been heard of late was at the memorial rally marking the 20th anniversary of Prime Minister Yitzhak Rabin’s assassination, held in the Tel Aviv square bearing his name. According to police estimates, about 100,000 people attended the gathering, which was organized to be free of political messaging, only calling for tolerance and the denunciation of violence. To those in attendance, the rally seemed like a cry from the silent masses for calm and conciliation, for a united social front to avoid the destruction of the Third Temple, that is, the Jewish nation.

According to Yedidia Stern, a law professor and vice president of research at the Israel Democracy Institute (IDI), the Rabin rally was a manifestation of political capital that no Israeli leader to date has succeeded in harnessing and turning into a tool for leadership. “There are a lot of questions here: What does it mean to be a Jew? What does it mean to be egalitarian? How can we deal with social tensions? Anyone who can offer serious answers to these questions will win the Israeli jackpot.”

In a conversation with Al-Monitor, Stern said that Israel is in the throes of a leadership crisis and a culture war among its citizens. “The manifestations of the war are religious, national and global, and it’s not only that the mainstream has shrunk. The disparate visions of the future of the state are the key to understanding the situation. There is a big quarrel going on regarding how to understand the current reality and the future. The extremist camps are gaining strength around the unresolved questions, and the inability to talk to one another is only growing.”

The results of the Annual Democracy Index published by the IDI support Stern’s assertions. In 2010, 43% of Jews surveyed in Israel responded that they attributed equal importance to the characterizations of the state as "Jewish" and "democratic." Meanwhile, 31% viewed the Jewish component as more important, and only 20% viewed the democratic component as more important. In the 2015 index, only 25% of respondents valued the two characteristics as being equally important, while 37% placed more emphasis on the Jewish component and 35% on the democratic component.

“The group that believed in the combination of the two components [in 2010] became more radicalized. A large part of it perceived the ‘Jewish’ characterization to be problematic and prefers a ‘democratic’ state instead,” Stern explained. He also said that some of his colleagues bear much of the responsibility for social radicalization in Israel.

Stern remarked, “Academia is keeping mum, a shocking silence. Where are the humanities? Social sciences? Judaic studies? Law? There is an ongoing neglect of the world of concepts. The intellectual arena is suffering from a conceptual bankruptcy that facilitates the growth of competing visions in the public space. Each tribe wants to see a different Israel. The ultra-Orthodox, the Tel Avivans, the settlers, the Arabs — none of these groups feels at home. What we need is an inclusive ideological package for everyone, but there is an impoverishment of the spirit, and the academic world does not contribute its part to the creation of new ideas.”

The sociologist Udi Label also points to social isolation in Israeli society as a key factor in the growth of extremism and disappearance of the center. “There are already subgroups within the communities, for example, among the settlers. Even within this large community, there are isolated groups. This process is intensified by ‘deferred anger’ — in other words, a trauma or anger that was not viewed as something that could be expressed legitimately. But now, with people withdrawing into subgroups lacking an external perspective, the deferred anger is released and expressed in extremism.”

Label, who focuses on how Israeli society relates to the Israel Defense Forces, gave an example of the society's favorable attitude toward its army. “Those who shut themselves away in groups — for example, the hilltop [radical settler] youths — can allow themselves to express their anger toward the IDF that evacuated localities during the [2005 Gaza] disengagement. This is anger that other settlers did not express, because they are part of the IDF and continue to respect it.” Thus, Israel's former communalism transformed into disparate groups, some of them sectarian.

The reason for this change, Label contends, is rooted in the decision taken many years ago to allow different educational streams to coexist in the country. Although the 1953 State Education Law was designed to unify the different ideological streams in a secular educational system, it also permitted the continued existence of Orthodox and ultra-Orthodox educational tracks.

“With our own hands, we turned our society into a collection of ghettos. Other countries also have ethnic groups, but they provide additional educational frameworks to their children in addition to uniform state education,” Label said. “Someone who does not belong to a sector of Israeli society lacks the experience of a real community, awareness of the difference in social classes and guiding leadership. Therefore, the ones to set new processes in motion are, ironically, the avant-garde.”

Is the present situation reversible? Can the moderate majority reclaim the reins of power in Israeli society? Stern said, “It is still possible to rouse the Israeli mainstream, but unfortunately that will come during a period of great crisis, when there will be no choice.”