Late Meretz leader Yossi Sarid was a scholar familiar with both world literature and Jewish texts, cherishing notions of integrity, peace and coexistence. 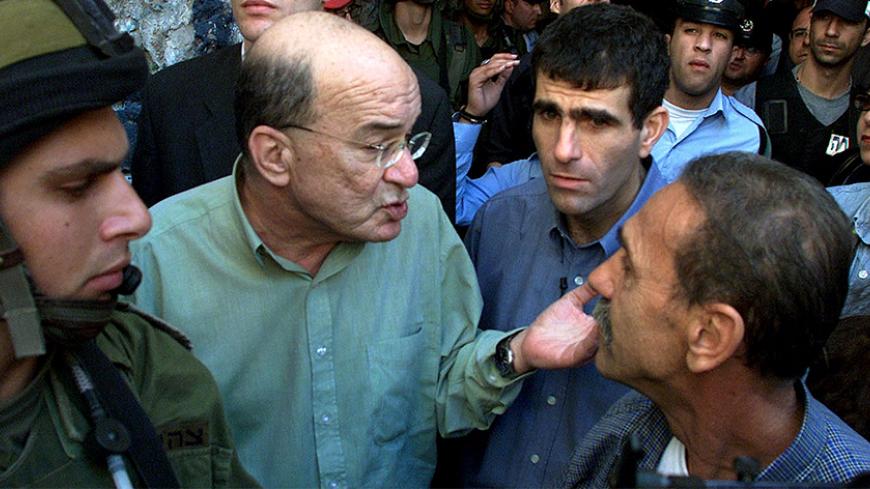 Israeli Knesset member Yossi Sarid (C), Secretary-General of the Meretz Party, gestures as he talks to police and soldiers during his visit to the West Bank city of Hebron, Jan. 8, 2003. - REUTERS/Nayef Hashlamoun

Eulogizing former Meretz leader and Minister Yossi Sarid, who passed away Dec. 4, is not simply bidding farewell to a gifted and fascinating politician, a man for all seasons with a finely honed pen, a proud leftist. A eulogy of Yossi Sarid is taking leave of a vanishing turn of phrase, of a dying form of discourse and of a sinking political culture. The new speak that has in recent years taken root in every corner of Israel’s public sphere was a foreign tongue to the shrinking camp of which Sarid was one of the most articulate and courageous spokespeople. From conversations I had with him and from assiduous reading of his articles, I came away with the impression that Sarid sensed his words of wisdom were blowing in the wind. He spoke the leftist language of democracy, Judaism and morality to a state that was turning in front of his very eyes increasingly zealous, ultra-Orthodox, nationalistic, right wing and colonial. The political language so familiar to him had become irrelevant in the new Israeli existence.

Sarid’s death is an additional nail in the coffin of rational political discourse based on facts and on an educated analysis of changing realities in Israel, the Middle East and the world. He spoke the language of rationalism to a society and leadership that speak messianics. Sarid held up a mirror to Israeli society, excelled at preaching to the converted, but for others was a pesky fly slamming over and over into a glass window. Recent years saw the political culture based on a tradition of serious debate, universal values and mutual interests replaced by loud arguments steeped in hatred and vulgarity.

Sarid learned firsthand that the secret of the right’s victory and the sinking of the left was not to be found in the elites shutting themselves off in what has come to be known derisively as the "State of Tel Aviv." In the hardest years of the first Lebanon war in the 1980s, the Sarid family packed up and moved to the Lebanon border town of Kiryat Shmona and later on to the village of Margaliot on the border. He taught civics, as a volunteer, in communities along the northern border and in later years in the Gaza border town of Sderot in the south, but the right somehow managed to make the name Sarid synonymous with “traitor,” “Israel hater” and “a knife in the back of the nation.” Were it not for his writing skills and the respectable pulpit he received from Israeli daily Haaretz, Sarid would have invariably lost his special standing as a national prophet of doom after leaving politics 10 years ago. His finely honed pen accorded him the dubious honor of being the messenger delivering bitter news to the nation and suffering the consequences at the hands of the enraged public.

With Sarid’s death, the left has lost a wise son, equally versed in the writings of Jewish sages as he was in the origins of Marxism. He had a self-deprecating humor and sarcastic wit. At his fingertips there were to be found more knowledge and understanding of Jewish wisdom and law than in all the offensive long-winded language of Culture Minister Miri Regev and Knesset member Yariv Levin (both of the hawkish camp in the Likud Party). Sarid used to say that being Jewish does not mean burying the sons in order to occupy the graves of the fathers (a reference to soldiers dying in wars to preserve patriarchal burial sites). Sarid’s downfall symbolizes Israel’s downfall from the thin wire on which Zionism teeters, the wire that bears Israel’s democratic nature as well as its Jewish one. Nowadays, to be considered Israeli, even an inherently secular politician like Yesh Atid Party leader Yair Lapid must drape himself in a prayer shawl.

Sarid was one of the last denizens of the dovish camp within the Labor Party — a movement that has all but forsaken the peace agenda, concealed the Oslo Accord and even changed its name in the last March 17 elections to a more “centrist” one: the Zionist Camp — all in a transparent and hopeless ploy to court the voters of the right. Sarid, like Shulamit Aloni (also former leader of Meretz), crossed the lines in 1984 from the big Labor Party to the Ratz Party that evolved into the small Meretz Party. Both preferred joining the leadership of a small principled, biting opposition party, to sticking with a large, toothless ruling party. Nonetheless, when Labor leaders Yitzhak Rabin and Ehud Barak needed the support of Meretz to promote diplomatic initiatives, Aloni and Sarid did not stand idle on the sideline. Both proved that a balance can be found between principled ideology and active involvement in running the affairs of state as knowledgeable and honest government ministers.

In recent years, Sarid lost all hope that he would live to see the left restored to its glory days. He watched with deep regret the results of the last elections, which almost voted his party — the only one in Israel whose banner carries the combination of “leftist” and “Zionist” — out of the Knesset. Like many of his fellow travelers, he could not stand the delegitimization and demonization conducted by the right, with Prime Minister Benjamin Netanyahu at its head, against anyone opposed to the policies of occupation and settlements. He, too, was left helpless as the waves of hatred swept up Jews and Arabs, forcing them to live on their swords. He watched with anguish as Israel was turned into an outcast, even among its best friends — and his best friends — in the world.

Sarid was a living embodiment of the kind of life we, the public, could have had — Israel’s Jewish and Arab citizens. A life of partnership, equal rights and education for peace. Sometimes I imagine how Israel might have looked had Sarid headed the government. There is not a single person in government, including its head, as gifted, honest and wise as Sarid was. How many wars would we have been spared? How much suffering would have been prevented for the two peoples unable to live in peace with no one to separate them from death?

It is customary to say (quoting Israel's national poet Haim Nachman Bialik's poem, “Should Your Soul Wish to Know”) of soldiers killed on the battlefield that “in death they willed us life.” In death, Sarid willed the lovers of peace, democracy and integrity, those who walked in his footsteps for years, a continued struggle for Israel’s well-being, for its enlightenment and yes, also for its security. Go in peace, friend.