Chocolate used to be on the Israeli list of banned items, but not anymore, as chocolate shops have been proliferating in light of the increasing demand in Gaza. 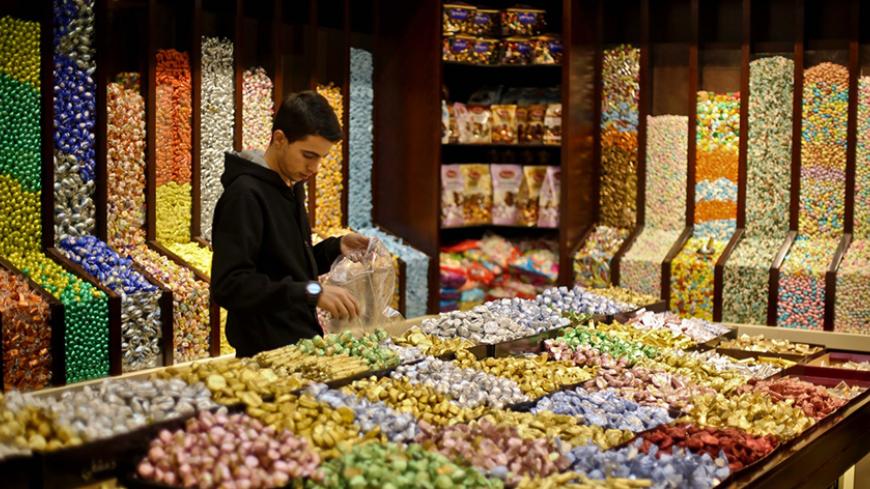 GAZA CITY, Gaza Strip — In 2008, when Samia was a college student, she could not find chocolate in the Gaza Strip’s shops because chocolate was placed on the Israeli list of banned items after the imposition of the blockade in 2007.

But when the tunnel smuggling via the border with Egypt started in late 2007, chocolate, food and many products such as fuel and construction material found their way to the stores, albeit at high prices. When the number of tunnels increased, reaching into the hundreds, the price of chocolate dropped. But not all types of chocolate were available.

In 2010, chocolate was removed from the Israeli list of banned items, and the Gaza market almost drowned in chocolate.

Samia, who only gave her first name, told Al-Monitor, “There is now a phenomenon of specialty shops selling chocolate in Gaza. This means that you can find all chocolate types that you couldn’t see or taste before. You no longer have to ask someone to bring them from the outside.”

Many Gazans, including Samia, were very pleased with the opening of a chocolate store, al-Gayyar, at the end of September in Gaza City. The store offers many kinds of chocolates at relatively low prices, according to Samia.

“We couldn’t afford to buy large quantities of chocolate in the past, as one Galaxy bar would cost 4 shekels ($1.05). But today, the same chocolate bar is now worth 2 shekels (52 cents). Sometimes they are sold for less as part of an offer,” Samia added.

Deeb al-Gayyar told Al-Monitor that he opened the store, which he calls Al-Gayyar Mall, because of “high demand for chocolate and the presence of a large amount of [chocolates]. … The mall’s opening was delayed for two years because the materials that we needed for the opening of the mall — such as wood and iron decor materials and advertising materials — were banned from entering the sector.” These likely were smuggled through the tunnels before the tunnels' destruction.

Although it is not a mall as per the globally recognized concept, it is the largest store selling chocolate in the Gaza Strip.

The store has special areas for Syrian Halkoum — which comes from Turkey, not Syria because of the security situation there — and Nabulsi Halkoum, which is imported from Nablus in the West Bank, and a special section for different types of candy, as well as dark and sweet chocolate of the Turkish, Spanish, English, Swiss, and UAE types. They are sold for 20 to 100 shekels a kilo ($2.40 to $12 a pound). There is also Aliyt and Dragee chocolate., and a special section with various gift ideas.

Deeb al-Gayyar added, “Specific [chocolate] types used to enter Gaza through the tunnels. After allowing them to enter through the Karam Abu Salem [Kerem Shalom] commercial crossing, we started importing more types of chocolate from various countries. Because of the improved trade relations with Turkey, traders find it easier to import Turkish chocolate [brands], such as Solen, Ulker, Bifa, Alpella, Elit, which now dominate the [Gaza] market.”

The Al-Gayyar Chocolate Company alone imports an average of 150 tons of chocolate a month for the Gaza market, according to Deeb al-Gayyar.

Al-Monitor asked the Ministry of National Economy for the official statistics on the average monthly chocolate consumption and importation, with little response. Officials only said that 120 tons are consumed and imported monthly, but the numbers contradicted the estimates of traders Al-Monitor interviewed.

Al-Gayyar Mall is not the only one. Many new shops have specialized in chocolate for years, such as Bonboniara, which opened in 2011 on al-Wahda Street in central Gaza City. Its owner, Ahmed al-Muzaini, said, “My father was impressed with the idea of ​​chocolate shops that spread in the West Bank during his visit there. So we decided to open this shop [in Gaza], which was met with great demand because of our unique innovation in packaging chocolates at various prices. … The economic situation affects demand, which increases during special events. Despite that, the prices are affordable, but still some people don’t visit such shops, while others visit three times a week to buy chocolate.”

Khaled Subeih, the owner of On the Line, which opened in March on Al-Jalaa Street in central Gaza City, believes that “specialty shops selling chocolates have changed the culture of the people in Gaza, who like new things. Chocolate has become a key commodity for people of all ages, economic status, and for various social occasions.”

The competition reaches its peak during the holiday period — namely during Eid al-Adha and Eid al-Fitr — as there is great competition on the price of a kilo, especially for the Turkish Taraba chocolate, due to its high demand and quality. Deeb al-Gayyar deplored the government’s neglect of such competition, saying, “We have special distribution rights from international companies. But some traders import the same types that we supply via Israeli traders who hold those same distribution rights, and no one protects us.”

One trader who declined to be named told Al-Monitor, “Instead of the government encouraging chocolate traders and other traders, it burdens them more with taxes on the crossings, particularly with the solidarity tax, and encourages them to pass on this tax burden to the consumer, not the trader.”

Several owners of companies that import chocolate declined to talk to Al-Monitor because of the intensification of competition between companies and to avoid mentioning how they were affected by the war in the summer of 2014 — as many of their showrooms were destroyed due to shelling, east of Gaza— for fear that their business reputations may be affected.

It is true that Gaza has been under a tight Israeli siege since Hamas took over the Gaza Strip in 2007. But that does not prevent the population from seeking joy and well-being, which they can obtain from a piece of chocolate that, until some time ago, was a mere dream for most.