How kindergartens have become fertile recruiting ground for Hamas, Fatah 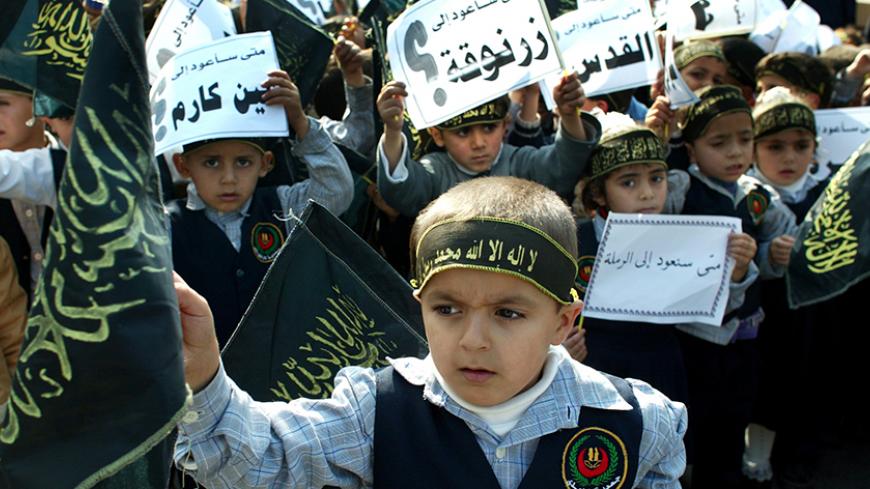 GAZA CITY, Gaza Strip — Zainab al-Azaar got used to hearing her son Iyad, 5, reciting partisan songs and moving his legs and arms as if he were in a military parade at home, although she has repeatedly told him not to. She noticed he was exhibiting — at such a young age — a leaning toward Hamas, which is affiliated with his kindergarten in the Nuseirat refugee camp in the central Gaza Strip.

She told Al-Monitor, “I always heard Iyad repeating songs, and I believed it was OK since we used to listen to these songs on partisan radio and TV stations during the war, with news on Al-Aqsa TV or Al-Kofiya TV. Yet what caught my attention is that my son had a fight with his cousin because the latter sang [Popular] Front for the Liberation of Palestine’s songs.”

She added, “At that moment, I felt that my son was being oriented toward a particular ideology, and I decided to go to the kindergarten that he attends," which promotes itself as a school focused on teaching children how to recite the Quran. "I was surprised to see the kids there performing dance steps to the lyrics of partisan songs. When I asked why, I was told that the kids would be performing in a show that was being prepared.”

Azaar spoke to members of the kindergarten’s administration and criticized them for teaching the children partisan slogans and songs. She said the director told her that the curriculum was part of the kindergarten’s general policy, that there was no law banning it and that if she did not like it, she would just have to move her child to another kindergarten — which is what she ended up doing.

Intisar Ghattas prevented her son Ahmed from taking part in an Oct. 28 demonstration in support of Al-Aqsa Mosque held by his kindergarten in Rafah, in the southern Gaza Strip. Kindergartners often participate in national demonstrations and events with their parents’ approval. She told Al-Monitor she refuses to let her child take part in demonstrations organized by Hamas, with which the kindergarten is affiliated.

Ghattas said, “I know that the kindergarten my son attends is affiliated with a party. But it is the nearest to our house, and I am keen on following up on what my child is learning in kindergarten. I noticed that some children are surrendering to the teachers who are teaching them partisan slogans, and I fear that my son will become affiliated with a Palestinian faction. This is not because the factions are bad, but rather because Ahmed is still too young to embrace a party’s ideology.”

Mohammed al-Astal moved his son Qasem to a kindergarten in Khan Yunis, in the southern Gaza Strip, after Qasem referred to Palestinian politician Mohammed Dahlan using the title “Sir.” Astal rejects the idea that his son should glorify political figures.

Astal told Al-Monitor, “I am affiliated with the Fatah movement, and my son is attending a kindergarten that has a tendency toward Fatah. Yet I definitively refuse that my son should glorify individuals. I want to raise him to love and defend his country, rather than considering people sacred.”

He added, “My wife told me that my son is always wearing yellow headbands, the symbol of the Fatah movement. I was happy to hear it, but then I was shocked at the idea that my son would be pushed to embrace the ideology of some people. [I want him to have] the freedom to choose his own ideologies, affiliations and orientations.”

Mohamed Siam, general manager of public education at the Ministry of Education, told Al-Monitor, “It is [only] normal for private partisan kindergartens to teach their students their own ideas, as a way to teach them about their community."

Siam added, “All of Gaza’s kindergartens are private, and some have embraced the Palestinian parties’ ideas. We want to regulate them based on a specific curriculum, but we cannot muzzle and prevent the people from teaching their children about Palestinian resistance movements.”

The ministry instructs kindergartens to adopt a unified national discourse, but does not mind that each kindergarten follows a particular program as long as it does not contradict the national unity principle, he said, adding that every party has a right to inform people about its history and heroes. Unfortunately, this has not been done in the correct way, according to the parents who met with Al-Monitor.

Kindergartens are important for entertaining children and teaching them how to integrate into their communities. However, some parents fear partisan kindergartens in Gaza are manipulating children’s minds and grooming them to become the political parties' supporters and soldiers of the future.