Tourism Minister Yariv Levin claims that the Supreme Court imposes on the government and Israeli public a radical left-wing worldview. 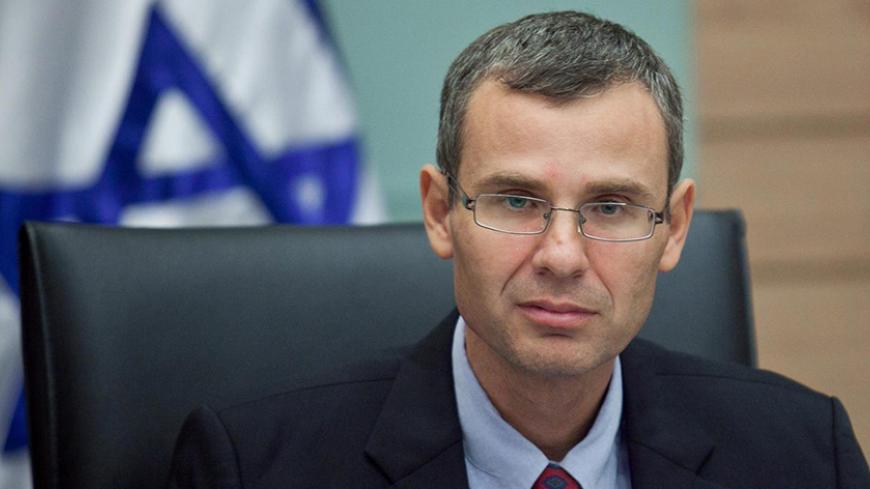 Israeli Tourism Minister Yariv Levin believes there’s no connection between the fight he and friends on the right are waging against the Supreme Court and the graffiti spray-painted Nov. 3 on the wall of the court building in Jerusalem. The graffiti was to protest the court’s decision approving the demolition of a synagogue built in the West Bank settlement of Givat Ze’ev on private Palestinian land. The graffiti, which said, “You don't destroy a synagogue, we want a Jewish state,” was painted in red on the wall of the Supreme Court, once considered the holy of holies of Israeli democracy and now the right wing’s favorite punching bag.

Levin, a jurist by profession with roots planted deeply in the hard-core ideological right, was quick to issue a statement condemning the vandalism. But this was perceived as disingenuous on his part after he recently claimed that the Supreme Court was encouraging terrorism when it issued an injunction delaying demolition of the homes of the Palestinian terrorists who murdered Eitam and Naama Henkin (Oct. 1), Danny Gonen (June 19) and Malachi Rosenfeld (June 29).

Since his election as a Likud Knesset member in 2009, Levin has been spearheading a reasoned and methodical campaign to limit the power of the legal system in general and, in particular, of the Supreme Court, which he described in the past as a bastion of “the radical left.”

In an interview with Al-Monitor, Levin strenuously rejects claims that his pronouncements contributed to the inflammatory climate against the Supreme Court and indirectly to the spray-painting of the graffiti. He argues that such claims are, in fact, part of a systematic campaign to silence a legitimate voice in order to preclude change. According to Levin, if anything the harsh words against him and the derogatory names he has been called by the Israeli Haaretz newspaper contribute to a climate of incitement.

Al-Monitor:  Do you not see any connection between your claims that the Supreme Court is a threat to our existence and provides terrorism with a tail wind and the unprecedented spray-painting of graffiti on the Supreme Court wall?

Levin:  Making such a connection is a very grave accusation, which, in my view, is also anti-democratic. Its only aim is to silence criticism of the court. A democratic state must grant freedom to criticize the ruling authorities. The criticism is in no way a license to carry out violent or illegal actions, and the fact that there are people who act this way is in no way linked to the criticism. If a person decides to act in such a manner, I think that he is not at all listening to the criticism I voice.

I think the way to discuss such matters is through an open and deeply penetrating discourse in the Knesset and media. When you don’t do that, the frustration and anger can erupt elsewhere. This system is scared of criticism, and that’s why it tries to silence it, knowing full well that the criticism is on the mark. It knows that once people get over their fear of confronting the system head on, the necessary changes will follow. After all, anyone who dared criticize the court 10-15 years ago was considered beyond the pale, and this can also be seen in articles written against me these days. They are far more inciting than anything I say about the legal system. If I were to write such articles, I would probably be accused of causing all sorts of things.

Al-Monitor:  Do you really believe the Supreme Court encourages terrorism? In which way is that expressed?

Levin:  Anyone in public office has a responsibility to ensure the safety and well-being of Israel’s citizens. But the Supreme Court, time and again, prefers its very radical worldview, which sanctifies the human rights of very specific people at the expense of Israeli citizens and their right to life, which to me is the most basic of rights. The Supreme Court justices don’t do this because they are mean or they want to encourage terror, but the result is very severe. This worldview ties the hands of the government and of the security forces and eventually leads to a loss of deterrence and a lack of necessary tools to deal with the current situation.

This is true for the delay in demolishing the homes of the terrorists, the delay in revoking the citizenship and residency [of terrorists] and in expelling people to Gaza. But it doesn’t just have to do with the issue of terrorism. The same goes for the Supreme Court’s rulings about infiltrators [reference to illegal immigrants and refugees]. These rulings undermined the tremendous effort made by the government to remove the infiltrators from the country, something that is by way of being a national interest for the State of Israel. Here, too, the Supreme Court preferred the rights of those who came to Israel illegally over the rights of the residents of the southern Tel Aviv neighborhoods [where many of the illegal immigrants live] to a normal and reasonable life.

Time and again, the court takes its worldview and imposes it on the government, the public and the Knesset with such highfalutin words as “proportional” and “reasonable.” This, in my view, is very serious when you take into account the process of selecting Supreme Court justices, which does not reflect a wide array of views and is thus unbalanced. But our legal system protects with all its might a warped selection process the likes of which doesn’t exist anywhere in the world: The selection of judges is carried out behind closed doors, based on a buddy system, by a committee controlled by judges who choose other judges just like themselves [with the same worldviews]. I believe the end result is many things, but democracy it’s not.

Al-Monitor:  The Supreme Court also ordered a delay in demolishing the synagogue in Givat Ze’ev. How does that fit in with your claims?

Levin:  That actually reflects them well. The attempt to draw a parallel between delaying the demolition of terrorists’ homes and the demolition of the synagogue is not serious. On the issue of demolishing the terrorists’ homes, the Supreme Court seemingly enables execution, but then, three months later, once the actual warrants are handed out, there is a new situation, which does not enable anymore to carry out [the demolition], either for calming down things on the ground or for diplomatic reasons.

As for the synagogue, it’s obvious that a two-week delay will not change a thing, and within two weeks, the demolition of the synagogue will be possible, with exactly the same difficulties as today. I expect the court, when deliberating on the case of the synagogue demolition, to at least ask the state to elaborate on what it is doing to demolish the many mosques built illegally in numerous places. Then we would realize that the enforcement is selective, that mosques are not being demolished out of fear [of the consequences], whereas the synagogue can be torn down without causing too much fallout.

Al-Monitor:  Do you think the way the Supreme Court serves as a “shield of Palestinians” gives them [the Palestinians] more confidence to carry out terror attacks and hurt the state?

Levin:  In the long run, the other side looks at you, and your deterrence capability influences its activities. The more he sees that you are restrained and your hands are tied, for reasons of diplomacy, too, he clearly increases his daring and his scope.

The most salient example is the Arab Knesset members. The fact that the Supreme Court, time after time, gave its stamp of approval to the Balad Party [National Democratic Assembly] and enabled [Knesset member] Haneen Zoabi to run, automatically led to the radicalization of all the Arab Knesset members, because there’s no limit. The Supreme Court made a dead letter out of the law that bans the election of anyone seeking to change the character of the State of Israel as a Jewish and democratic state.

Al-Monitor:  The 20th anniversary of the assassination of Prime Minister Yitzhak Rabin is being marked these days [Nov. 4, 1995], and once again there has been discussion of the right-wing incitement that led to the murder. How do you feel about it?

Levin:  The arguments [at the time] were legitimate. Exactly as with the Supreme Court issue, one must differentiate between a penetrating debate and criminals and hotheads. The bottom line is that it’s hard to prevent the deeds of an individual. But whereas our basic approach and norm is that arguments are legitimate and violence is forbidden, on the other side, it’s the other way around — discussion is not legitimate and anyone acting violently is a shahid [martyr] and a hero.

Al-Monitor:  Do you feel that the narrow right-wing government leads an appropriate agenda and addresses the terror wave?

Levin:  This government is a virtual paradise compared with the previous one. Although it has the support of 61 [out of 120 Knesset members], it is relatively homogeneous, and the relationships between its members are good. But the narrow parliamentary majority makes it hard to carry out major moves such as reforms in the legal system. The Kulanu faction [of Finance Minister Moshe Kahlon] refuses to support it. All in all, the government appears stable, and it’s clear that with 61, you sometimes lose Knesset votes. It’s not the end of the world.

The government is dealing with the wave of terrorism very well. Anyone who deludes themselves that we will live in some sort of exemplary calm and all the Muslims of the world will only praise and laud the State of Israel for being a true partner for peace, does not know the reality. This struggle is part of a routine, and we would do well to understand that this is the way things are.

Al-Monitor:  Where do you stand on bringing the Zionist Camp party into the coalition?

Levin:  I am emphatically in favor of expanding the government, both with Yisrael Beitenu and the Zionist Camp. The disagreement over whether [Palestinian President] Mahmoud Abbas is a viable partner is irrelevant. [Zionist Camp and opposition leader Isaac] Herzog can be allowed to conduct negotiations just as [former Justice Minister Tzipi] Livni was. I don’t see that this has a real chance, and if anyone believes that it does stand a chance, I am not scared that they will conduct a dialogue [with the Palestinians]. On the contrary, we can do lots of things together. This will provide stability, and it’s the right thing.

Al-Monitor:  Has the wave of terrorism seriously damaged tourism to Israel?

Levin:  Of course it doesn’t help, but contrary to previous cycles of violence in which we automatically stopped all our advertising campaigns and moaned and groaned and demanded compensation, this time I decided to do the opposite. I beefed up the campaigns. I wanted to signal that things are basically OK and Israel is a safe place for tourists compared with the vast majority of places in the world. Israel is truly one of the safest countries for tourism in the world. We have done really well in preventing the flight of tourists. There were cancellations, but not on a wide scale.