As Palestinians in the diaspora watch helplessly the current uprising in the Palestinian territories, they seek nonviolent ways to gather support to their cause. 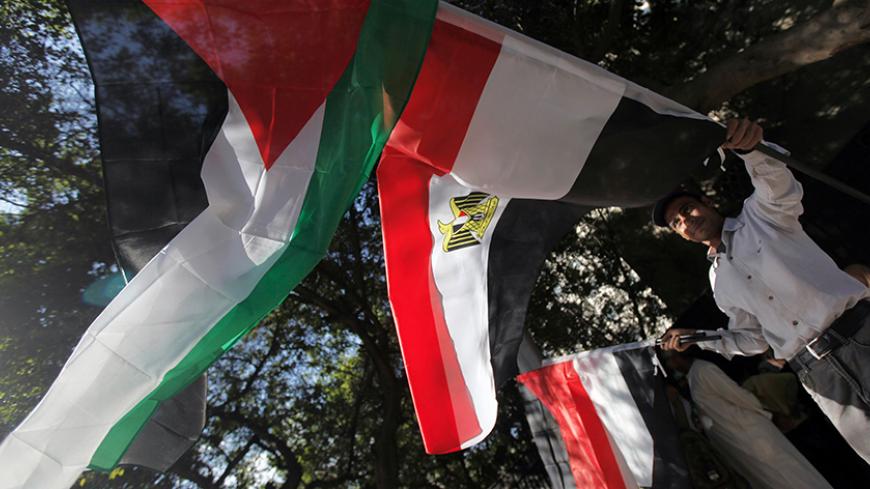 CAIRO — Although the roots of the latest unrest in Israel and Palestine remain disputed — an arson attack by settlers against the Dawabshe family, purported Palestinian hatred and anti-Semitism, or decades of Israeli occupation — since September, headlines from Jerusalem have dominated the international news cycle.

Although those stories have since been relegated to the back pages, chiefly by the Islamic State’s (IS) Nov. 13 attacks on Paris and the ongoing bloodshed and negotiations surrounding the Syrian conflict, Palestinians are still navigating their way through the unrest.

A poll by the Palestinian Center for Policy and Survey (PCS) conducted Sept. 17-19 found that, in the absence of a viable peace process, 57% of Palestinians surveyed supported a return to an armed intifada. At the same time, 42% believed that armed action would be the “most effective means to establish a Palestinian state alongside the State of Israel,” and 29% “believed in the efficacy of negotiations.”

At the same time, few such polls exist for the estimated 5 million officially recognized descendants of Palestinian refugees in the Middle East eligible for assistance by the United Nations Relief and Works Agency for Palestine Refugees (UNRWA) in the Near East, or the estimated 11 million total in the global diaspora.

Some Palestinians in the diaspora — many with a strong sense of national identity but enforced detachment from their homeland — remain uncertain about the future. There is not always much space for the myriad views from the diaspora, dictated in part by the different experiences Palestinians outside the Palestinian territories actually face.

Two descendants of Palestinian refugees in Cairo, both with their own experiences of displacement, activism and the search for identity, spoke to Al-Monitor about the experience of watching developments unfold in Israel and the occupied territories while living outside [of it].

Salwa, a civil society worker in Cairo who asked for her real name to be withheld because of the nature of her work, told Al-Monitor that the images of slain Palestinian teenagers had initially made her “more militant.”

She said, “My belief in a peaceful resolution is starting to fade. I feel so frustrated. I believe in nonviolence, but it’s taking so much time that by the time it will start influencing politicians and creating political change, it will be too late. There will be no Palestine left.”

“It’s like giving painkillers to someone who is dying. It removes the pain, but that person is still going to die,” Salwa added, describing the role of nonviolent resistance in an increasingly violent landscape. At the same time, she is unsure about how best to participate or effect change.

During the 1948 Nakba (Catastrophe), Salwa’s family was displaced to Lebanon. Salwa was born in Beirut’s Shatila refugee camp just weeks after the 1982 massacre carried out by Christian Phalanges militias under the eyes of the Israeli army. By 1984, the family had claimed asylum in northern Europe after Salwa’s brother transited through East Germany and on to another country — almost a presage of the kind of journeys being made by refugees fleeing violence, repression and terrorism in the Levant today.

Mahmoud Sameh, who leads the PLO-affiliated Bilad as-Sham choir, told Al-Monitor that his Palestinian-Egyptian roots and the political situation he has witnessed firsthand in Egypt inform his sense of identity and response to recent events in the Palestinian territories. The son of a Palestinian mother and Egyptian father, he is not officially Palestinian (according to Egyptian patriarchal birth rights and UNRWA’s own definition of “Palestine refugees”) but, through songs, he has created a strong sense of identity. “I’m more attached to my Palestinian side,” he said.

“Most Egyptians wouldn’t be involved in something in such a way, but being in the choir made me feel things,” Sameh told Al-Monitor. “When you sing you feel things, and for the Palestinians who settled in Egypt it’s like a community.”

He added, “We gather together, we sing together. The choir was founded on the idea of struggling — not just through weapons, but struggling through art too.”

In her 2005 ethnography, "Palestinians Born in Exile: Diaspora and the Search for a Homeland," US academic Juliane Hammer interviewed dozens of young Palestinians who returned after the 1993 Oslo Accord and who had never lived in Palestine before.

Meant to show “the young faces of the Palestinian diaspora, those who had to create their Palestinian identity without having lived in Palestine,” Hammer found that Palestinians in the diaspora “do have a sense of a shared national identity.” On the other hand, growing up in different countries and cultures influenced each person’s identity. “Such factors as class, economic and legal status, and political affiliation” did the same, Hammer wrote.

At the same time, Diana Allan’s 2014 ethnography of Beirut’s Shatila camp, "Refugees of the Revolution," argues that “in the stereotypes of nationalist discourse, refugees are the stoic, ‘steadfast’ embodiment of a people who refuse to disappear.”

She argues that such a singular nationalist discourse erases the different localized and often dour socio-economic struggles that Palestinians in the diaspora face, as in Lebanon for example, on a day-to-day basis.

“Much has been written on the ways refugees relate to the past,” Allan writes later, “and very little on how they orient themselves to the future.”

Evidently, no one thinks the same. About the future, Sameh is fearful. Salwa seems more determined, albeit with an air of caution.

Having participated in the Egyptian revolution since 2011, sometimes taking the choir down to Tahrir Square to sing Palestinian national songs, Sameh is apprehensive about the direction in which he says Palestinian protesters and activists may be headed.

“What I see is exactly like what happened in Egypt. Remember Mohamed Mahmoud?” he said, referring to violent clashes between Egyptian protesters and police in downtown Cairo in November 2011. “People are throwing stones, and when the police feel in danger or feel that the people are gaining the advantage, they just shoot. They kill someone and you just lose out.”

He added, “I don’t see any success — except maybe that the [Palestinian] youth have gone outside without any political parties or names involved. And this is what scares me about the future.”

Sameh explains how his sister cries when she watches news of Palestinians being shot on the TV news. “I stopped watching the news on TV,” he told Al-Monitor. “When you see the events, your mood is ruined. You can’t support and you can’t help.” He describes a feeling of hopelessness.

Salwa, on the other hand, thinks the boycott, divestment and sanctions movement is one of the few options left for Palestinians in the diaspora to participate — a way of connecting with a “nonviolent call coming out of Palestine” and the many Palestinians living outside.

“Either you’re there or you’re not,” she told Al-Monitor. “The only thing you can do [from outside] is to put pressure on your own country or the place you live in.”