The Israeli right is claiming that Israel and France are fighting against the same kind of terrorism motivated by religious fundamentalism. 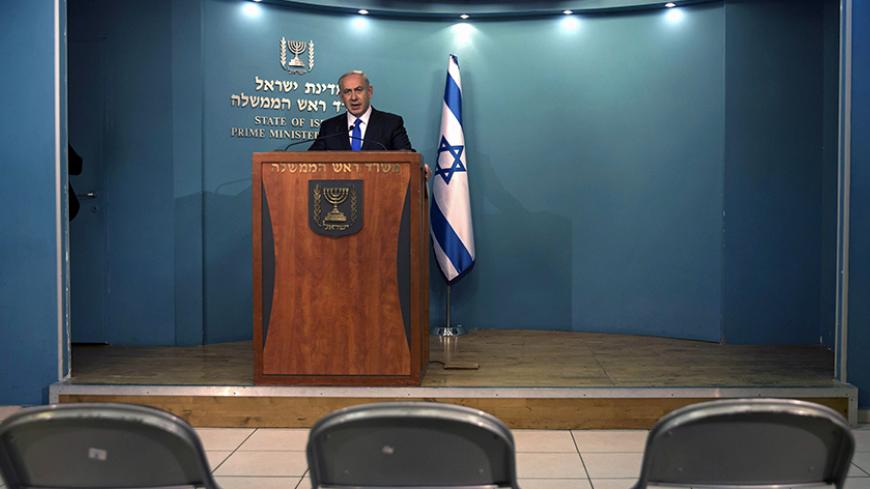 Israel's Prime Minister Benjamin Netanyahu delivers a statement to the media following the attacks in Paris, at his office in Jerusalem, Nov. 14, 2015.

“The Paris attacks provided the Cabinet with the support it needed to outlaw [the northern branch of] the Islamic Movement,” said a senior Likud minister, explaining the timing of a decision after it had been postponed repeatedly over the past few weeks. Speaking on condition of anonymity, he added, “As soon as the scope of the Paris attacks became clear, it was obvious that this was the right time. The whole world was reeling from Islamic terror. Moves of that sort have legitimacy, and the focus would be less on us now.” According to him, the move was a necessary one. “It is just too bad we didn’t do it earlier,” he said.

From the moment that details about the events in Paris came out Nov. 13, it was only a matter of time until Israeli politicians on the right, headed by Prime Minister Benjamin Netanyahu, would use the bloody attacks to promote their narrative. Outlawing the northern branch of the Islamic Movement was a move directly connected, time-wise, to the effects of the Paris attacks. The international press was focused on events in Europe, French fighter jets were bombing Islamic State territories, and the Americans were actively involved in destroying the group’s oil tankers. Given this mood, the Security Cabinet could take certain steps that it ordinarily could not without provoking a powerful international response against Israel. Even the Zionist Camp fell in line. Its leaders, Isaac Herzog and Tzipi Livni, both supported the decision.

Israel’s Islamic Movement is a religious and political organization that was founded in the 1970s to bring Israel’s Arab citizens closer to Islam. There was an ideological rift in the movement in the 1990s, while the Oslo process was underway. As a result, the movement split into the more radical northern branch, which opposed the Oslo Accord and established ties with Hamas, and the southern branch, which is considered more pragmatic and moderate. Some in Israel claim that the northern branch is one of the major contributors to the current wave of violence that erupted on the Temple Mount in Jerusalem.

Even before making their decision about the Islamic Movement, just hours after the attacks in Paris took place, the leaders of the Israeli right released statements linking the tragedy in the French capital to the Palestinian-Israeli conflict. That the incident in Paris came during a wave of Palestinian terrorism in Israel made it possible for them to argue that “we’re all in the same boat” in the struggle against Islamic terror.

As soon as the Sabbath was over, the chairman of HaBayit HaYehudi, Education Minister Naftali Bennett, wrote a Facebook post expressing solidarity with the French people, accompanied by a wistful photo of the Eiffel Tower at sunset. What stood out most in his statement, however, was his effort to link the terrorist attack in France to the conflict with the Palestinians: “We share the pain of our French brothers and sisters. This time, all the tears, the messages of consolation and tweets from celebrities will not be enough. From Jerusalem to Paris, from New York to Madrid, the free world is under attack by radical Islam. It is time to wage an uncompromising war against them, with relentless strikes against their territory, until victory. There is no other way.” His comments inspired thousands of likes and shares.

The number-two person in HaBayit HaYehudi, Justice Minister Ayelet Shaked, also wrote a popular Facebook post less than a day after the events in Paris. She linked the terrorist attack in Europe with another that occurred that same day in the southern Mount Hebron region, in which a father and son were killed. “I share in the anguish of the Litman family of Kiryat Arba, and in the pain of the families of those killed in Paris. Fundamentalist Islamic terror does not distinguish between Jews and Christians, between Israelis and French. As far as it is concerned, we are all heretics. We will fight against this terrorism with all the strength we have, and we will win.”

Shaked and Bennett may be right that the Islamic State’s terror can strike anywhere, but their efforts to blend the attack in Paris with the wave of Palestinian stabbings in Israel are a stretch. They are only doing it because it is convenient for the right and supports its arguments.

The hope of Netanyahu, Shaked, Bennett and other politicians from the right that others in Europe or the United States will adopt their narrative is both arrogant and detached from reality. Furthermore, the attempt to link the Palestinian-Israeli conflict to Islamic State terrorism is a double-edged sword, as Swedish Foreign Minister Margot Wallström made quite clear. Wallström provoked a furor in Israel when she said, “The Palestinians see that there is no future,” while discussing the kind of radicalism that led to the terrorist attack on French soil.

Spokespeople for the right must remember that just as the Israeli occupation is not the motive behind the Islamic State’s terrorist attacks, they cannot argue that Palestinian terrorism — motivated, at least in part, by nationalist and territorial claims — is part and parcel of the Islamic State’s campaign of terror. When Netanyahu and his ministers link Paris to Jerusalem, they are laying the groundwork for statements like that made by the Swedish foreign minister. In another excellent example of this kind of misstep, Minister of Public Security Gilad Erdan said, “The State of Israel must serve as an example and spearhead the struggle against extreme Islam, whose messengers have slaughtered innocent people in Paris, New York, Madrid and Israel. Hamas and the Islamic State share an ideological platform that leads to attacks around the world and a wave of terrorism in this country.” If that is the case, how can we possibly complain about the Swedish foreign minister’s remarks?

Right-wing supporters expressed sorrow and solidarity on the social networks, with some of them seeming to gloat. Many expressed the hope that the people of France will come to identify more with Israel.

Meanwhile, the center-left is being forced to close ranks or maintain its silence. This time, leaders of that camp prefer to avoid infuriating the public with claims that there is no significant link between what happened in Paris and what is happening in Jerusalem or that the solution to the Palestinian-Israeli conflict does not depend on the global war against terror. Not one of them has said that Netanyahu and his coalition partners are exploiting terrorism in Europe to push the need to resolve the conflict with the Palestinians down the road for a few more years. Even if the center-left is acting solely out of political considerations, it is serving the narrative of the right and delaying any chance we might have to resolve the conflict.