Why Kerry should have skipped his stop in Israel

Israeli Prime Minister Benjamin Netanyahu depends on his right-wing Knesset members for his political survival, and is not interested in US Secretary of State John Kerry's efforts for some goodwill gestures toward the Palestinians. 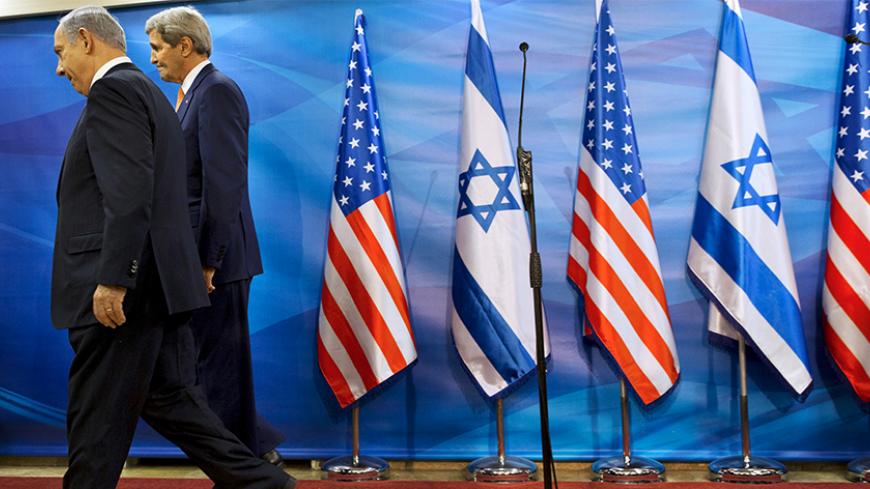 Israeli Prime Minister Benjamin Netanyahu and US Secretary of State John Kerry leave after speaking briefly to the media before their meeting at the prime minister's office in Jerusalem, Nov. 24, 2015. - REUTERS/Jacquelyn Martin

If the Nov. 24 visit by US Secretary of State John Kerry to Jerusalem is to be judged by its contribution to advancing a diplomatic deal between Israel and the Palestinians, then Israeli news editors were right to push this non-event to the tail end of the news broadcasts and the back pages of the papers. The stories about the young women who were allegedly sexually harassed by Knesset member Yinon Magal (HaBayit HaYehudi) are far more newsworthy and interesting than another meaningless signature by Kerry on the attendance sheet at the prime minister’s office. The affair is a reminder that even in the religious HaBayit HaYehudi party — the standard bearer of “family values” — there are those who neglect to obey the seventh commandment, “Thou shalt not commit adultery” (Exodus 20:14). Even the scandal de jour involving Oren Hazan, the contemptible Knesset member (Likud) who, metaphorically, runs red lights and doesn’t even stop to let a wheelchair pass, is more relevant to Israel’s citizens and the residents of the occupied territories. Hazan’s sleazy, victorious smiles are a reminder of the flimsy foundations propping up the Israeli government.

But Kerry’s visit should not be judged by its usefulness to the diplomatic process, and not even by its contribution to preventing further deterioration of Israeli-Palestinian ties. The importance of this visit lies in the additional proof it provides of the impotence of the world’s strongest power. This visit belongs in the lengthy annals of US initiatives that intensified the sense of despair and hopelessness among the Israeli and Palestinian peace camps regarding the diplomatic option. In the words of Brig. Gen. Guy Goldstein, deputy coordinator of Israeli Government Activities in the Territories, “Absent combined diplomatic steps by Israel and the Palestinian Authority [PA], the current clash will not end.” Speaking on Oct. 28 at a conference at Netanya Academic College, the senior military officer added, “We are sitting on top of a kind of powder keg. Unless significant change occurs, mostly or entirely in the diplomatic arena, we will probably keep experiencing what we’re experiencing today.” His comments, the likes of which are being made behind closed doors by many defense officials, can be summed up in these words: Every piece of evidence pointing to the lack of significant change, such as another futile visit by an American secretary of state, pumps additional fuel to the fire burning under the powder keg.

Briefing reporters in Abu Dhabi on the eve of his stop in Israel, Kerry said, “We have ideas for how things could advance. But this street violence doesn’t provide any leader with the framework within which they could look their people in the eye and say, ‘There’s a reason we’re sitting down and talking.'” It is hard to overstate the importance of this sentence, spoken by the most important diplomat in the world. The US secretary of state replaced the message that peace is the right answer to violence, with words to the effect that violence delays peace. In fact, he supported the approach presented by Prime Minister Benjamin Netanyahu the following day at the start of their meeting, according to whom “there can be no peace when we have an onslaught of terror — not here or not anywhere else in the world.”

There was good reason for Netanyahu to greet Kerry with the words, “You are a friend in our common efforts to restore stability, security and peace.” The “stability” to which Netanyahu referred is acceptance of the status quo in the relationship between occupier and occupied. The “security” is the supply of additional state-of-the-art fighter jets to Israel. And there’s no point wasting time talking about joint “peace” efforts. The prime minister is actually trying to put together a package deal that would include US recognition of areas dubbed “settlement blocs” and agreement to construction in those areas. In return, Israel would grant building permits to Palestinians in West Bank Area C, which is under Israeli civil and security control, and additional “goodwill gestures” to strengthen the standing of the PA.

It almost goes without saying that there was no way the United States would sign off on such a deal. One can assume that Netanyahu himself assessed that the United States would not provide a stamp of approval to what it considers an uncontrollable criminal enterprise. The prime minister surely did not believe that Israel would throw the Palestinians a few bones and US President Barack Obama would become the first president to change the fundamental US policy on the settlements, in force since June 1967. And, in fact, Deputy State Department spokesman Mark Toner made it abundantly clear in a Nov. 24 briefing that the answer to Netanyahu’s demand was “a big no.” The spokesman took the opportunity to remind Israelis that Democratic and Republican administrations alike view the construction in the settlements and Israeli attempts to create facts on the ground as moves undermining the two-state solution.

It seems that even if Obama were to come to Israel to lay the cornerstone for a new neighborhood in one of the settlements of the Etzion settlement bloc, this deal would not have been consummated. Netanyahu informed Kerry that any measures supporting the PA would depend on a drastic reduction of violence and incitement by the PA. But even if he were to truly understand the connection between Palestinian violence and Palestinian despair, it is highly doubtful that Netanyahu would succeed in making any sort of gesture toward the PA. Even a mere decision to temporarily freeze construction in illegal outposts would dump him into political oblivion. His political survival depends on Hazan’s whims and Magal’s voting mood, not to mention his rival on the right, HaBayit HaYehudi party leader Naftali Bennett. “Bibi [Netanyahu] spoke abroad about a unilateral move,” Bennett boasted to party activists, “and he retracted his remarks only because I put a bullet between his eyes.” Afterward, the minister tasked with the education of the children of Israel explained that of course, these violent words were just a metaphor. As long as Obama is not prepared to treat Netanyahu with the same determination and decisiveness as Bennett in order to make him overcome his recalcitrance on taking serious diplomatic steps, he would do well to leave Kerry home.