The government's decision to outlaw the northern branch of the Islamic Movement tramples numerous principles inherent to a democratic society. 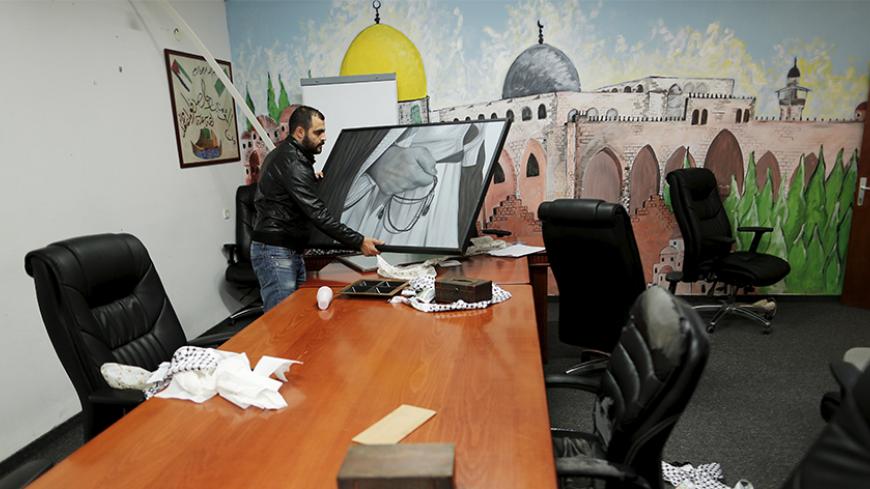 A man carries a photo inside the offices of the Islamic Movement's northern branch in Israel after Israel outlawed the movement, in Umm al-Fahm, northern Israel, Nov. 17, 2015. - REUTERS/Ammar Awad

Although the State of Israel is involved in an ongoing struggle against radical elements in the occupied territories and on its sovereign territory, the government’s decision to outlaw a political movement, the northern branch of the Islamic Movement in Israel, is a highly unusual measure. There are only two precedents to the decision announced Nov. 17: In the early 1960s, a similar step targeted the Arab Al-Ard movement, and in 1994 the government declared the Jewish Kach and Kahane Chai movements terror organizations, thus banning them. This tool is rarely used and with good reason.

The Israeli legal system and enforcement agencies have proved themselves capable of dealing with the leader of the northern branch, Sheikh Raed Salah, when he overstepped the law. Two years ago, he was convicted of inciting violence and terror and of racial incitement. Following an appeal, he was sentenced to 11 months in jail, in addition to receiving an eight-month suspended sentence. In sensitive cases, when the state feels that evidence cannot be publicly revealed for security reasons, it makes use of administrative detention, that is, detaining a person without an indictment or trial.

Declaring an organization illegal, however, is a badge of shame for a democracy. In “Terror and Democracy in the Aftermath of Sept. 11,” published by the Israel Democracy Institute, legal scholar Naomi Himeyn-Raisch wrote that a state’s ability to provide itself and its democracy with substantive protection depends to a large extent on authorities maintaining a balance between the values of security and the values of liberalism, as well as on strict adherence to the rule of law.

After the Cabinet’s decision on the Islamic Movement, Prime Minister Benjamin Netanyahu said, “Democracy must defend itself. It must defend itself against those who strive to subvert it.” He cited the desire “to prevent incitement, which contributes to terrorist attacks against innocent people.” There is no doubt that keeping innocent people out of harm’s way is a commendable goal in a democracy on the defense. The first question, however, is whether outlawing the northern branch promotes this goal. The second question is to what extent this decision is in keeping with the value of equality before the law, the life force of any democracy.

The answer to the first question can be found in an assessment provided to the Cabinet by the Shin Bet, the internal security agency, which recommended that the government not ban the northern branch. Many intelligence experts worldwide believe that organizations operating out in the open are less dangerous than those operating underground. Not only that, but an organization that has been banned can continue operating underground, conducing the same activities which it was outlawed for. Alternatively, it could also operate openly and legitimately under a new name and a parallel leadership. Al-Ard, which conducted subversive activities challenging Israel's legitimacy, was replaced by Al-Balad, a movement advocating the same ideology. Those who didn’t want Al-Ard or Al-Balad got the northern branch of the Islamic Movement to argue against Israel’s right to exist.

Ahead of the upcoming annual conference of the Center for a Shared Society at Givat Haviva, Haifa University sociology professor Sammy Smooha wrote that the Islamic Movement, which has two branches, is considered a legitimate entity in Arab society and therefore one can expect across the board protests against the banning of the northern branch. According to a study he conducted — the 2015 Annual Index of Arab-Jewish Relations — 57% of Arabs in Israel think the Islamic Movement faithfully represents them, 42% of the entire Arab public define themselves as supporters, members or activists in the Islamic Movement, as do 32% of Israeli Christian Arabs. For 9% of Israeli Arabs, the northern branch of the movement is the organization with which they identify most, even more than with the Arab political parties. Smooha explains that this identification stems from the Islamic Movement in part being a social movement that provides education and welfare services to the entire Arab population.

At a March 23 meeting with Arab, Druze and Circassian citizens, Netanyahu expressed “regret” for his declaration on election day, March 17, that the “Arabs are going to the polls in droves.” He said, “I see myself as a prime minister of each and every one of you, of all citizens of Israel, without any distinction of religion, race and gender.”

One can assume that Netanyahu meant that a government under his leadership and the security and enforcement agencies in all the territories under its control would not discriminate between Jews and Arabs. A quick look at the data available on the websites of human rights organizations such as B’tselem and Yesh Din, however, provides a fair idea of the difference in the way Israeli authorities treat a Palestinian who builds on “state lands” without permission compared to a Jew who does the same thing or moves illegally onto private Palestinian lands. How much trouble and effort do the security forces exert to solve the murder of a Jewish family compared to the energy dedicated to catching the killers of a Palestinian family?

I wrote on Nov. 3 in Al-Monitor about the “contribution” of the northern branch of the Islamic Movement and of Sheikh Raed to the current cycle of violence, especially the use of the dangerous and mendacious slogan “Al-Aqsa is in danger.” The things he previously said that led to his sentencing for racial incitement have stirred long forgotten memories. At a public gathering in 2007 in East Jerusalem, Salah said, among other things, the following horrible words, invoking an age-old accusation of Jews having committed blood libel: “We never allowed ourselves to knead the dough for the bread eaten at the meal breaking the Ramadan fast with the blood of children … What would have happened to some of Europe’s children, whose blood would have mingled with the dough of the [Jewish] holy bread?”

In the ruling for Salah's case, Judge Chana Miriam Lomp wrote that the right to freedom cannot serve to convey messages detrimental to social values that are no less important than freedom of expression, such as human dignity, the right to security and bodily integrity, as well as to the defense of the State of Israel against those who rise up against it and its citizens.

It would be interesting to hear what the judge would have written about the messages in the best-selling “Torat Hamelech” ("The King’s Torah"), published seven years ago by Rabbis Yitzhak Shapira and Yosef Elitzur of the Yitzhar rabbinical college, in the Yitzhar settlement. For example, they wrote, “When debating the killing of babies and children, … it is reasonable to harm children if they will clearly grow up to harm us and in such a situation they, specifically, will be targeted.” We are unlikely to get a judicial response to this in the near future. Jewish clerics who do not accept the authority of the law are not brought before a judge. Arab inciters are deemed outside the law. Jewish inciters are above the law.