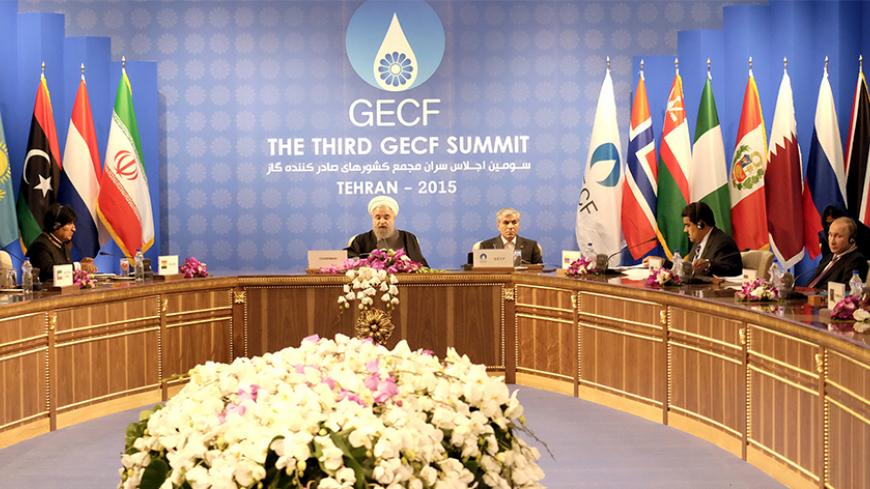 In the two days leading up to the conference, Iran was busy hosting the 17th GECF ministerial meeting, during which Azerbaijan was announced as an observer for the first time. Moreover, while neither a GECF member nor observer, Turkmenistan’s president attended the forum as a special guest. Of note, Kazakhstan, Iraq, the Netherlands, Norway, Oman and Peru are GECF observer states, while other members include Egypt, Libya, Qatar, Trinidad and Tobago, the United Arab Emirates and, of course, Iran.

The Nov. 23 gathering — the third of its kind after the Doha summit in 2011 and the Moscow meeting in 2013 — allowed the seven observers and 18 member states to discuss the latest developments, trends and policies related to energy, in general, and natural gas, in particular. The event was also an effort to reaffirm the members’ continued support for GECF’s objectives.

At the Forum’s opening ceremony, Iran’s President Hassan Rouhani affirmed that the conference aims to help boost the “collective interests” of member states and facilitate multilateral technical cooperation — all of which was outlined in a joint declaration that was prepared during the preceding ministerial meeting and subsequently endorsed by the visiting heads of state. The declaration asserts that observer and member states collectively hold two-thirds of the world’s proven natural gas reserves and vows to expand multilateral relations and encourage joint investment projects in the gas sector. Rouhani also announced Iran’s decision to further protect the security of the global energy supply, calling on his guests to devise “coordinated policies” to help increase the share of natural gas in the global energy basket.

Energy — or better said, petroleum — has always been a key component of Iranian diplomacy in the past decades. However, it now appears that the Islamic Republic is considering a revision of this strategy, developing its gas industry as a replacement for oil — especially as crude prices have been plummeting. Of note, Iran has in past years lagged behind Qatar in exploiting South Pars/North Dome, one of the world’s largest gas reservoirs that Iran and Qatar share in the Persian Gulf. This has been primarily due to macroeconomic mismanagement and external pressures; namely, the international sanctions on the Islamic Republic.

Indeed, senior officials in Iran hold the conviction that the country should “become a major player” in the global gas trade, given that it holds more than 33 trillion cubic meters of gas reserves. In this vein, Iran hopes to double its natural gas output to 1.3 billion cubic meters a day by March 2021. Thus, the gas summit was a great opportunity for Tehran to communicate its energy development plans to global investors, right at a time when economic sanctions on Iran are about to be lifted as a consequence of the July 14 Joint Comprehensive Plan of Action.

The gas summit also sent a message to the 21st Conference of Parties to the United Nations Convention Framework, held in Paris starting Nov. 30, on climate change, with the Iranian president calling on the 196 countries participating in the Paris event to turn to a cleaner source of energy — namely, natural gas — which holds “rich harvestable resources for the future decades.”

Another — and maybe the most important — objective of the GECF gathering was to encourage member countries to help stabilize global natural gas prices. Addressing the conference, Nigerian President Muhammadu Buhari called on GECF’s leadership to sustain the pricing mechanism of gas in the international market to the advantage of its members. Buhari said, “The stability of the energy and financial market is critical to ensuring investments in current and future natural gas projects.” His thoughts were shared by other participants, including Libyan Education Minister Fathi al-Majburi, who warned against the impact of market fluctuations on the economies of GECF member states, urging joint efforts to stabilize the global market.

However, despite hopes that GECF could play a systematic role in the pricing process similarly to what OPEC has done, GECF will only be able to price liquefied natural gas in an effective way, because it is the only gas product that can be shipped in tankers and, therefore, priced in short-term contracts. Indeed, the most-consumed gas product (compressed natural gas) is transferred through pipelines, which are dependent on long-term investment in order to be constructed. For this reason, the pricing process for natural gas, unlike the case for oil, is more affected by bilateral negotiations between the buyer and seller than global markets. Thus, GECF is unlikely to have an impact on the global market, at least not in the short run. However, it may affect gas exports in the long run, as the participants of the summit in Tehran vowed to boost technical cooperation and joint investment projects, all of which are measures that could lead to a rise in supply in a matter of years.

Although some argue that OPEC-like gas organizations are doomed to fail, regional or international cooperation among natural gas exporters may not be ineffectual after all. Optimism among GECF member states has grown since the forum’s first and second summits, where only four and six heads of state, respectively, showed up. Additionally, even if GECF fails to set a pricing policy, it will definitely facilitate exchanges of expertise and know-how among member countries. This would provide a win-win situation that yields returns for both gas exporters and gas consumers, given the rising demand for this cleaner form of energy, which is less harmful than coal or oil and easier to store and transport.