Faced with increasing rates of alcohol consumption, the Iranian authorities are beginning to treat the issue as a public health rather than religious concern. 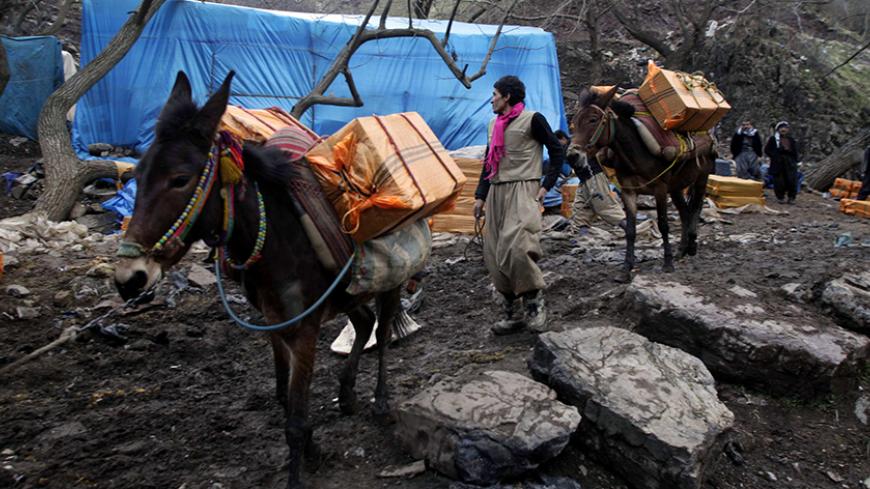 A member of a smuggling group holds the leash of a horse carrying alcoholic drinks during a smuggling operation to Iran at the border near Sulaimaniyah, northeast of Baghdad, Jan. 26, 2012. - REUTERS

Some European powers’ “no wine, no dine” policies have made headlines once more — this time over the cancellation of a formal meal gathering the French and Iranian presidents at the Elysée Palace. France’s refusal to provide the Iranian delegation with a halal meal, of which alcohol abstention is an inseparable part, is not unprecedented. Former Iranian President Mohammad Khatami’s state banquet with King Juan Carlos of Spain in 2002 was nixed over Spanish disagreement with a wine-free meal.

The problem stems from how wine is a defining symbol for both cultures: While champagne is a symbol of French culture and the country is the world’s biggest producer of wine by value, abstention from alcohol is considered one of the key defining markers of Muslim identity — particularly in the 21st century. This symbolism has been a central part of Iran’s campaign to promote its image as a country ruled by an Islamic government. Within its borders, however, the meaning of drinking is undergoing a metamorphosis.

The prohibition of alcohol has been a powerful symbol of post-revolutionary Iran. It even played a significant role before the Islamic Revolution, when it was used to mobilize people against the Shah of Iran. One of the indicators of the shah’s anti-Islamic policies, late Supreme Leader Ayatollah Ruhollah Khomeini argued, was that “there were more wine bars than book stores.” Indeed, bars, pubs and cinemas were among the main targets of riots before the Islamic Revolution, resulting in the destruction of many such venues. After the revolution, alcohol was prohibited as expected and laws passed to punish those who engaged in drinking. However, 36 years after the revolution, alcohol consumption is becoming a normal part of everyday life for more and more Iranians.

These days, 60-80 million liters (16-21 million gallons) of alcoholic beverages are smuggled into the country every year, with much more estimated to be produced illegally in homes and illicit breweries inside Iran. Though drinking, selling and importing alcohol is illegal, one can find alcoholic beverages within an average of 30 minutes in major Iranian cities. To gain an idea of the extent of alcohol consumption, the former head of Iranian police announced in July that there are an estimated 130,000-200,000 alcoholics in Iran. As a result, Iran this summer declared plans to license 150 alcoholic rehabilitation clinics in the near future.

These figures are certainly stunning, but what deserves particular focus is the steady change in the discourse relating to alcohol consumption in Iran: in wording and language, the authorities responsible for addressing the issue and the rationalization for prohibition.

Iranian officials and news outlets are using increasingly neutral terms for alcoholic beverages. Previously, terms associated with Islamic and Sharia values, such as “khamr” (wine) and “mosker” (intoxicant) were predominantly used. These days, however, officials employ value-neutral terms such as “mashrubat” (alcoholic beverages) and refer to “alcohol misuse,” which do not contain any Islamic judgment about alcohol. In this vein, drunks are seen as patients in need of medical treatment. This is in stark contrast to the previously common conceptualization of drinkers as people who commit “crimes against God” ("hudud") under Islamic law, including Iran’s Islamic Penal Code. Thus, alcohol consumption is no longer an exclusively religious problem, but a health issue. Consequently, the Ministry of Health features more and more in news related to alcohol. Likewise, treatment of alcoholism comes under the domain of doctors rather than clerics and police, as science rather than faith has become the final authority on the issue.

The National Document of Prevention, Treatment and Rehabilitation of Alcohol Consumption of Iran for 2013-2017 speaks of alcohol consumption as a "health priority” and recommends that government bodies involved in the program to address the latter consider the latest international experiences in this regard. Though this document alludes to the religious prohibition of alcohol consumption and even includes restriction of access and increase in punishment among possible solutions, it remains primarily a public health policy document written by four physicians.

After years of ignoring the realities of contemporary Iranian society, officials have finally realized that religion alone is not enough to persuade people to drink in moderation. They therefore keep bringing up other perspectives. If religious reasons for abstaining from the ills of alcoholism won't persuade people, it is thought that perhaps medical reasons will. Indeed, authorities have begun to speak of “informing people of causes, risk factors and side-effects of alcoholism” and warning of the risks of issues such as drunk driving. The Iranian transit police announced in March 2013 that it had equipped its patrol cars with blood alcohol level testing kits and warned drivers against violating traffic regulations. They emphasized that drunk drivers traveling at 75 kilometers (47 miles) per hour “are exposed to [crash] risks 11 times that of other drivers” to convince people of the risks involved.

This gradual change, however, is not limited to the discourse on alcoholic beverages or even to a specific government. In almost all other areas concerning the private lives of citizens, a similar transformation can be observed. For instance, morality police patrols have changed their names to “patrols of citizen rights,” while the national plan to enforce the wearing of veils is called the “initiative for improving societal security.” This is not simply a name change, but an indication that previous conceptions of these matters are no longer accepted.

Consecutive governments — despite their differing political orientations — have contributed to this change, including the hard-line administration of former President Mahmoud Ahmadinejad. Indeed, much of the change in the discourse on alcohol emanated from Kamran Bagheri Lankarani, Ahmadinejad’s Minister of Health from August 2005 to September 2009. Of note, these figures were supported by hard-line clerics such as Ayatollah Mohammad Taghi Mesbah Yazdi. Indeed, Lankarani employed the same language and arguments used by the incumbent moderate administration of President Hassan Rouhani.

Most of all, in the grander scheme of things, these shifts indicate one important long-term trend in Iranian society: the process of marginalization of religion. Though the government still insists on preserving the symbolic value of alcohol prohibition, an increasing number of Iranians are looking for justification for it other than religion. Whether the authorities will be effective in their new approach remains to be seen.

by Murielle KASPRZAK and Joseph SCHMID | AFP | May 26, 2022
END_OF_DOCUMENT_TOKEN_TO_BE_REPLACED