Late Prime Minister Yitzhak Rabin was a true leader, a pragmatic and coherent politician who could explain to the public why separating from the Palestinians was in the interests of Zionism, unlike Israel's current party leaders. 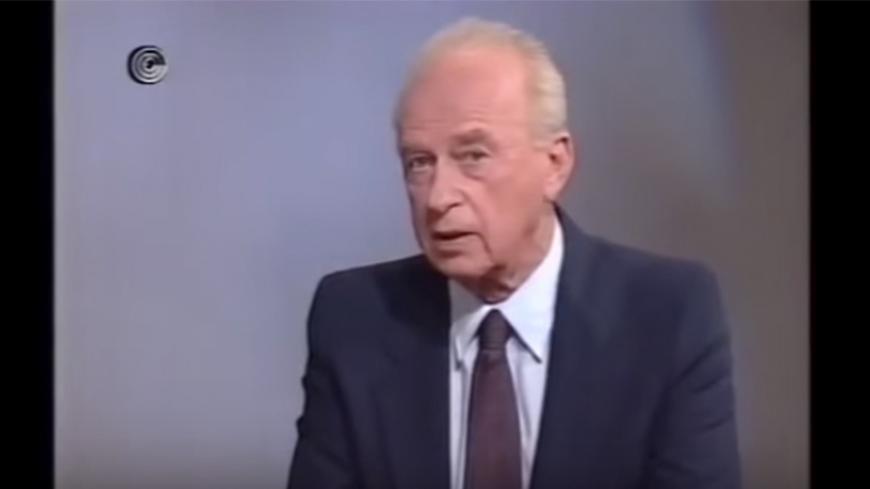 It was June 1992, one week before the elections for the 13th Knesset. A televised debate was coming to a close when moderator Nissim Mishal let Prime Minister Yitzhak Shamir ask his rival one final question. At that moment, it was made perfectly clear to the public that they were being asked to choose between two distinct paths: one advocated by the right, and another advocated by the left. Now, 23 years later, those two paths are just as relevant. Shamir, then the 77-year-old prime minister and leader of the Likud, asked Labor Party Chairman Yitzhak Rabin, “Do you really want a Palestinian state within the Land of Israel? With whom do you want to reach a territorial compromise? With whom?”

It was the final confusing days of the first intifada, and the question was meant to trip Rabin up, but the leader of the opposition remained unfazed. He actually seemed eager to answer with a clear position. He said, as succinctly as he could, “I oppose a Palestinian state between us and the Jordan River. In the same way, I don’t want 1.7 million Palestinians to become citizens of the State of Israel. That is why I support autonomy and in 1977, I voted to approve it in the Knesset. Mr. Shamir abstained. … I’m for starting with that. New opportunities will open up before us. I have three principles: No to 2 million Palestinian citizens, no to a Palestinian state and no to a withdrawal to the 1967 boundaries; Jerusalem and the conflict borderlines should stay ours.”

In questions leveled at him throughout the debate about the state of negotiations with the Palestinians and Syria, Shamir also answered clearly and unequivocally. He presented the right-wing alternative, arguing, “In this tiny land, there is no room for concessions. If we are talking about a Palestinian state, what does that mean? That there will be two states? In this tiny bit of land? That would be impossible.”

The debate remained on topic throughout. In fact, it was so free of gimmicks that in today’s world, it would hardly be considered TV worthy. Looking back at it as a historical document, 20 years after Rabin's assassination, it reminds us, first and foremost, of what leadership really means, on both sides of the political divide. Rabin reminds us that the left could once explain to the public why separating from the Palestinians was in the interests of Zionism. The fact that Rabin said this after serving as defense minister throughout the first intifada and that he was forced to deal with the repercussions of the bitter violence — on his person and in the Middle East in general — grants particular validity to what he said. His high credibility among the public and his military record contributed as well. He was never suspected of tending to make concessions or avoid conflict with the Palestinians. He simply presented a pragmatic alternative to the approach presented by Shamir and the Likud, which called for maintaining the status quo.

Revisiting the debate serves as a reminder that even before Prime Minister Benjamin Netanyahu, Shamir used talks with the Arabs as a political bludgeon to attack the left. In one of his responses, he accused the Labor Party of being “in cahoots with the Arabs” and hinted that former President Shimon Peres had been acting behind his back while hammering out the 1987 London Agreement. Much like today, Shamir also had to contend with questions about Israel’s relationship with the United States. Tensions between the two countries ran so high at the time that the Americans held back loan guarantees, exacerbating problems the country already faced in dealing with the wave of immigrants arriving from the Soviet Union. And just like today, the reason for these tensions was Israel’s refusal to make progress on the diplomatic front or stop the settlements.

During the week the debate was held, political pundits noted that the public seemed indifferent about the election’s outcome. They expected a tie between the Likud and Labor. A few days later, Israel woke up to yet another political turnaround. Rabin won the election with an impressive 44 seats. A decidedly leftist government was formed, while the Likud was sent to the opposition benches with just 32. That election also marked the end of Shamir’s rule. He was forced to give up his position as Likud leader to an upstart politician named Netanyahu.

Just one year later, Rabin would be seen as a “traitor” by large swaths of the right because of his negotiations with the Palestinians. At the time, however, he was considered a Labor “hawk.” During his debate with Shamir, he was even asked how he would manage to function, surrounded as he was by Labor doves. This question, too, he faced head-on and said, “I am the candidate for prime minister. We have certain decisions made by the party committee, and it is my job to give voice to those decisions. Let me put it simply, then: I think that the State of Israel is facing huge opportunities, and that today the government is missing those opportunities.”

It is true that at that particular point in time, Rabin himself wasn’t yet ready to talk directly with Palestine Liberation Organization Chairman Yasser Arafat. Nevertheless, he knew exactly where he wanted to lead the country. When the moderator asked him almost teasingly, “As minister of defense, you spent 3½ years doing everything you could to suppress the intifada, and yet you failed. Why should the people of Israel believe you now when you say that if you are elected, you will succeed in stopping the intifada?” Rabin had his answer ready. “Yes, I was minister of defense when the intifada erupted. I did not place the burden of responsibility on anyone else for that, not then and not now. More accurately, I was minister of defense for two years and three months during the intifada. I used force. I employed tough measures. The press was critical of the high-handed way I acted, but in mid-1988 I reached the conclusion that without an integrated approach that combined the use of force and military means with the search for a diplomatic solution, we will never resolve this problem. That is why I pushed for it, and why I reached the peace initiative of the national unity government, which was directed at the Palestinians living in the territories. The Likud cut off this integrated approach.”

Rabin offered a glimpse into the process that he was undergoing at the time, and even at the conclusions he derived from it. Mishal continued to press him, asking, “You talk about a diplomatic process. Would you be willing to give up the Gaza Strip after these elections?” The answer was quick in coming. It was well-reasoned and clear, just like his rival Shamir’s answers. “At the end of the diplomatic process, I do not want to see 750,000 Gazans becoming Israeli citizens with identity cards, participating in our elections or even walking the streets of our cities,” said the head of the Labor Party. “Based on Israel’s international commitments, the first stage is to establish autonomy. I believe that we can reach that stage. We will establish an autonomous entity. I believe that we will succeed in obtaining resources from the Arab world to invest in Gaza and the West Bank, and that we will see fewer Gazans on the streets of our cities. I want the Gazans to stay in Gaza.”

Later, when asked about Syria, he explained why he wanted to resolve the conflict with the Palestinians first. “I see advancing peace between us and the Palestinians as my first priority,” said Rabin. “I think that we can reach an agreement through ongoing negotiations … over something that I, as an Israeli, am interested in — avoiding spending billions on political settlements. … There are no problems with Jordan. Syria was always the hardest nut to crack. We can leave it to the end.”

In the 1992 elections, Rabin actually managed to also convince Likud supporters to vote for him. He didn’t have to deceive or mislead them. He simply laid things out on the table for them. Anyone watching that debate today will wince nostalgically and painfully as they recall a time when both the left and the right had real leaders.