An immigrant himself, Chobani yogurt founder becomes icon for refugees

A Kurdish immigrant from Turkey, Hamdi Ulukaya became the founder and CEO of the top-selling Greek yogurt in the United States and has now pledged to donate much of his wealth to refugees. 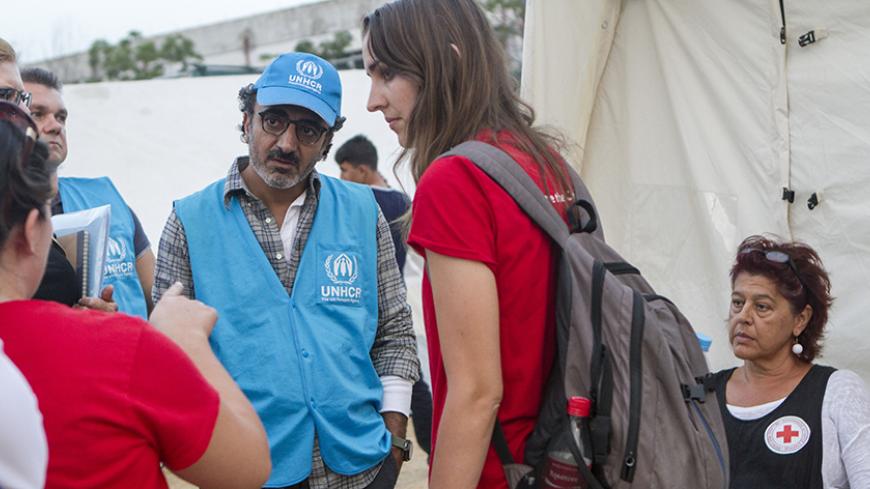 Hamdi Ulukaya, the UNHCR's new eminent advocate, talks with volunteers at a temporary refugee camp on the Greek island of Lesbos, September 2015. - UNHCR

Hamdi Ulukaya, a Turkish-American businessman of Kurdish ethnicity, was photographed in September on the Greek island of Lesbos wearing a blue UNHCR vest. He was sent there by the United Nations High Commissioner for Refugees as the UNHCR's newest eminent advocate. The appointment is a serious acknowledgment of his years of work with refugees and other philanthropic efforts.

Ulukaya is no ordinary businessman. At 43, he challenges popular conceptions of billionaire CEOs. First, almost everyone calls him by his first name. His signature simply reads "Hamdi." He is unpretentious and down-to-earth, and wears a kind smile that makes people feel like they have known him for decades.

He is also comfortable with his humble background and manages to make his personal history a source of inspiration, rather than resentment and regret. Born in a small town called Ilic of the eastern province of Erzincan, he proudly claims his identity as Kurdish. Indeed, he has angered Turkish nationalists with comments such as “I left Turkey because I was Kurdish and was very serious about Kurdish rights. A lot of Kurds in Turkey fled the country because their human rights were violated, their villages were bombed.” This statement was taken out of context of a longer explanation of why he cares deeply about refugees from Syria and Iraq. Headlines have also ignored his years of dedication and hard work to help displaced people and establish and contribute to charities in several Turkish cities.

Ulukaya has a big heart, so big that when he first launched Chobani Yogurt, he promised to donate 10% of his profit to international charities. He jokes about that decision: “It was easier to commit those days because I had nothing to lose.” But don't let the joke fool you. He has been hiring refugees to work in his yogurt factories in New York and Idaho for the last five years. Despite warnings against hiring refugees (“They don’t speak English!” “They don't have driver’s licenses!”), Ulukaya has made executive decisions to offer employment to people who have fled from hunger, persecution and fear. He has a firm belief that if a refugee can survive all these hardships, he will have the motivation to be the best. He also sees that variety can be an asset for an establishment.

That is where Ulukaya is different. He not only advocates for the wealthy to contribute to efforts to help refugees, but actively uses his business to provide job opportunities for them. At the end of May, Ulukaya made the "giving pledge" initiated by Bill and Melinda Gates and Warren Buffet. The pledge commits Ulukaya to donate much of his money to philanthropy and help in any way that he can. He had also set up a foundation, Tent, for this cause. On Sept. 29, he spoke at the Clinton Global Initiative in New York, elaborating upon what businesspeople can do to help alleviate the suffering of the displaced. His motto reflects his own life philosophy: “Just writing checks is not enough.”

So what is the secret behind Ulukaya's success? Hard work and passion are the short answer. His story is one of “reaching your dreams,” he explains. Coming to New York in 1994 to learn English, Ulukaya had a difficult time finding the kind of yogurt and cheese he enjoys. Yes, American markets are flooded with hundreds of different brand names and colors, but none of it tastes like the yogurt you're used to if you are from the Balkans, Anatolia or the Levant. Unless you go to a specialty store, it was rather difficult to find the kind that is white, thick, creamy and tangy with no food coloring or added sugar.

Ulukaya saw an opportunity. He first started a feta cheese business, Euphrates. His home province, Erzincan, produces one of the most expensive and sought-after kinds of cheese in Turkey. In 2005, he purchased a Kraft yogurt plant with a small business loan. His friends were deeply worried that he would go broke. His attorney asked why he thought he could survive producing yogurt at the same time and location where a food giant had given up.

Ulukaya was gambling on the assumption that Americans would consume more yogurt if it tasted better and were more accessible. So after buying the company, despite all the red flags raised by his friends, he started designing his plan. One of his recommendations to young entrepreneurs is “Do not just keep dreaming, get out there and start doing while dreaming.” His first executive action ran along that line. While trying to get the plant on its feet — meaning getting the equipment to work effectively — he said, “Let’s paint the walls.”

So, Ulukaya, along with four former Kraft employees and his master yogurt maker friend, spent months on ladders painting the outer walls of the factory. He remembers that at the time there was a cafe right across from the factory that motorcyclists frequented. The husky bikers, Ulukaya recalls, used to tease them, saying, “Look, you missed a spot.” Ulukaya and his close associates pretty much lived at the factory, located in a remote section of a small town. “I was and am still a factory worker today,” Ulukaya told Al-Monitor.

Chobani’s success is unique in the food industry for its revenues reaching over a billion dollars in five years and acquiring 52% of market share in eight years. Chobani is the top-selling Greek yogurt in the American market now. Ulukaya was proven correct that Americans will appreciate a healthy product that is affordable and reachable. He understood well that it is less about marketing than about producing a high quality brand. And as health consciousness increased, probiotics and high protein natural foods became more popular, and Greek yogurt in small cups with different flavor options widely available at convenience stores proved very successful.

Chobani opened its first brick-and-mortar store, a Mediterranean-style yogurt bar, in 2012 in the SoHo neighborhood of New York City. The menu features not only sweet creations with yogurt, but also savory options, some of which are served with all-time Turkish favorite bagel-like “simit.” Indeed, plain yogurt is the basis for hundreds of recipes in Anatolia and the surrounding regions, from yogurt soups to yogurt cake and dozens of different types of small dishes such as tzatziki.

Ulukaya says the SoHo bar also serves as a testing laboratory to see what the customers are enjoying the most so they can refine those flavors and prepare them for mass consumption. Interestingly, the Chobani bar does not offer the yogurt drink kefir. Will Chobani open other branches in the United States, we wonder? A senior official at Chobani told Al-Monitor, “Not if, but when is the right question.”

"Chobani" means "shepherd" in Turkish. It also means protector or guardian, and so is more meaningful than just being reminiscent of pastoral scenes. Always wearing a comfortable smile, Ulukaya appears to be an easygoing guy, but he has proven to be quite stubborn when it comes to standing up for his principles. For example, in February 2014, as one of the sponsors of the US Olympic team, Chobani posted an ad inspired by the gay pride flag and Ulukaya announced that Chobani opposes Russia’s anti-LGBT laws.

Ulukaya is a food revolutionary who has managed to make Americans crave yogurt that is also good for them. Plus, he is spreading goodness with his wealth — both with his money and personal experiences — to people fleeing the lands where yogurt is an everyday staple.

We all can learn from his experience.