Turkey’s hopes of replacing European countries as a major food exporter to Russia have been dashed. 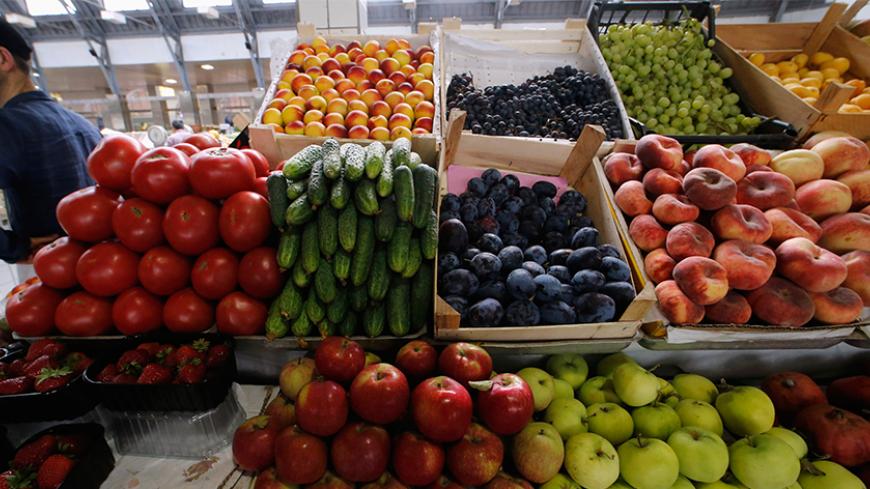 A vendor sells vegetables and fruits at the city market in St. Petersburg after Moscow imposed a total ban on imports of many Western foods in retaliation against sanctions over Ukraine, Aug. 7, 2014. - REUTERS/Alexander Demianchuk

Last year, the Russian government banned imports of meat, dairy items, and fruit and vegetables from European countries in response to the sanctions they had imposed on Russia over the Ukraine crisis. At the time, it was also announced that the affected products would be supplied by Turkey, sparking optimism in Ankara and among Turkish exporters.

Turkey’s then-Agriculture Minister Mehdi Eker said that Russia was especially​ interested in animal products, milk, dairy items, white meat and fish. In August 2014, a Russian delegation traveled to Ankara to discuss the issue and received a list of Turkish companies active in the relevant sectors. Ibrahim Yigit, chairman of the parliament’s agriculture commission and who took part in the talks, said, “We reached an agreement with Russia. Technical teams have begun work on the issue. This is something very profitable for Turkey. We have to make good use of this opportunity. Our exports to Russia totaled 3,346,000 tons, now they will reach 5 or 6 million tons. We used to supply 1.1 million tons of fresh fruit and vegetables to Russia; now the amount will reach 3-4 million tons.”

The head of the Turkish Agriculturalists Association, Ibrahim Yetkin, was equally upbeat, describing the deal as an “incredible opportunity” with little competition. The Turkish press was jubilant, with one headline calling the deal an “embargo lottery for Turkey.” Russian President Vladimir Putin remarked that Moscow “welcomed the Turkish producers’ intentions to increase meat, fishery, fruit and vegetable exports to Russia.”

A year later, however, the export data speaks of huge disappointment. According to the Turkish Exporters’ Assembly (TIM), exports to Russia stood at $2.76 billion for the first nine months of 2015, a 39.6% decrease from $4.57 billion for the same period last year. The economic crisis in embargo-stricken Russia, marked by curbed purchasing power due to currency depreciation, has been a major factor in pushing down Russian demand. In addition, Turkish exports have been undermined by returned shipments found to contain contaminated products, which, by the way, are allegedly resold to the Turkish market.

The well-respected daily Cumhuriyet broke the scandal Sept. 27 under the headline “They feed the poisonous food to us.” According to the report, tons of fresh fruit and vegetable exports from Turkey were returned this year because they contained residual pesticides and western flower thrips, slender insects invisible to the naked eye. The produce — mostly tomatoes, apricots, peppers, cherries and pears — was returned mainly by Russia but also by Switzerland, Germany and other European Union countries. In March, Russia returned a shipment of 25 tons of tomatoes. According to the Dogan News Agency, the Russian agricultural watchdog Rosselhoznadzor had denied entry because of western flower thrips.

So what happened to the returned shipments? Gungor said contaminated fruits and vegetables are supposed to be destroyed, but he has never witnessed such a procedure, suggesting the products might be sold to local markets.

Meanwhile, Turkey’s overall exports were also down in the first nine months of the year, falling to $106.29 billion, a 10% decrease from the same period last year. Exports to other major countries have also declined. After Russia, the second-largest decrease was in exports to Iraq, which were down 20.4%, from $7.83 billion to $6.23 billion, according to TIM figures. Germany was third on the list, with a decline of 14.16%, from $11.24 billion to $9.6 billion, followed by exports to France, which were down 13.9%, from $4.91 billion to $4.23 billion.

The prospect of increased food sales to Russia last year had been a morale booster for Turkish exporters, who had suffered significant losses in the Iraqi market amid the turmoil created by the Islamic State. The Russian market was therefore seen as a major opportunity and chance to compensate for losses elsewhere. As the Turkish saying goes, the calculation made at home went awry at the market. The hopes for a boom in exports to Russia have come to naught.