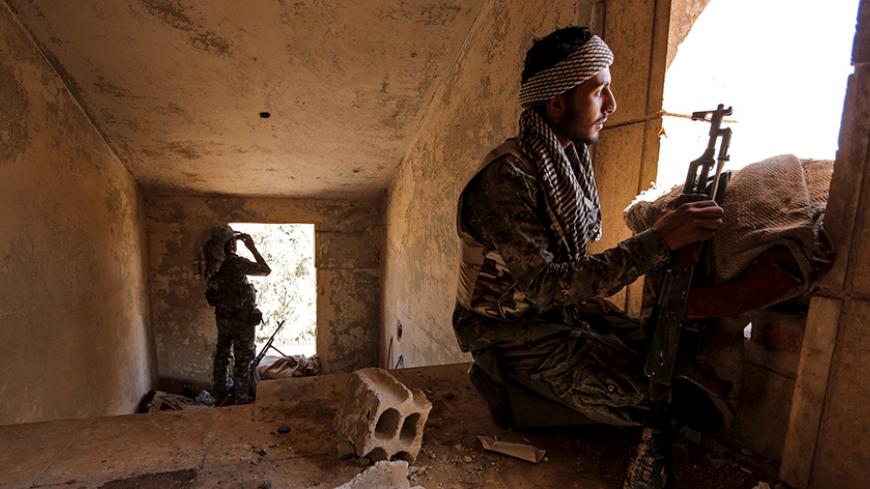 Amid the bevy of armed groups fighting in Syria, none has received the sort of fawning heaped on the Kurdish People’s Protection Units (YPG) and its political arm, the Democratic Union Party (PYD). Their prowess against the Islamic State, embrace of secularism and non-Muslims and emphasis on gender equality have made them the darlings of the international media and top allies of the United States. So it may come as a shock that the London-based human rights watchdog Amnesty International is accusing the autonomous administration that runs the areas of northern Syria under Kurdish control known as Rojava of committing war crimes.

In a 38-page report, "'We Had Nowhere Else to Go': Forced Displacement and Demolition in Northern Syria,” Amnesty International catalogues allegations of forced evictions of Arabs and Turkmens and the destruction of their homes and property. “In some cases, entire villages have been demolished, apparently in retaliation for the perceived support of their Arab or Turkmen residents for the group that calls itself the Islamic State,” Amnesty International noted. Villagers said they were ordered to leave at gunpoint, their livestock shot at. The watchdog used satellite imagery and video footage to verify the claims.

In the Arab village of Husseiniya near Tell Hamees, for instance, only a single house was left standing. Residents said the YPG had razed their homes in February. In Raneen, near Tell Abyad, locals said YPG forces had threatened to shoot them if they failed to leave. One person said, “They told us we had to leave or they would tell the US coalition that we were terrorists and their planes would hit us and our families. In Raneen, where some people were with IS, there were lots of problems but we had nothing to do with anything.” Alleged YPG threats of calling in US airstrikes against villagers if they didn’t leave are repeated throughout the report.

Kurdish officials consistently reject all such claims, saying that villagers had been evicted for their own safety because they were in militarized zones and could get caught in the fighting or hurt by improvised explosive devices planted by IS.

The report coincides with news that the United States has begun to airdrop weapons to a brand-new YPG-dominated formation called the Syrian Democratic Forces, which groups together moderate Arabs and Assyrian Christians who have been collaborating with the YPG in the fight against IS. "This successful airdrop provided ammunition to Syrian Arab groups whose leaders were appropriately vetted by the United States," said spokesman Col. Patrick Ryder in a statement.

His failure to mention the Kurds is almost certainly linked to growing Turkish unease over US support for a group that is closely linked to the Kurdistan Workers Party, which both Turkey and the United States label as a terrorist group.

“But we all know that the YPG is in the driving seat in the Syrian Democratic Forces,” a senior Western official told Al-Monitor on strict condition of anonymity because of the sensitive nature of the subject. The official added that he did not believe that the Amnesty International report would have any impact on the US-YPG alliance. “There are no guys in white hats,” he said. "It’s a rough neighborhood with rough characters and the Kurds are our allies and they are better than most."

Even so, Amnesty International’s findings are likely to be seized on by Turkey and Syrian rebel factions it is backing to reinforce long-running charges that the YPG is engaged in ethnic cleansing and should be barred from expanding the territories under its control. The YPG has been lobbying the United States to allow its forces to move against IS in Jarablus in the hope of joining the two PYD cantons — Jazeera and Kobani, east of the Euphrates River — with a third canton, Afrin, which lies to the west. But the United States, whose air power allowed the YPG to seize Tell Abyad in June, says that Jarablus is a no-go, part of a deal struck with Turkey when it opened the Incirlik Air Base for coalition operations against IS. The Kurds now hint that they may turn to Russia to achieve their goal.

In an interview with Al-Monitor, PYD co-chair Salih Muslim called the findings of a previous Amnesty International report on arbitrary detentions in Rojava “unfair and misguided." He said, “We are talking about individuals who mercilessly slaughtered our people, or were complicit in the carnage.”

In that report, published in September, Amnesty International researchers interviewed 10 prisoners in two separate prisons in Rojava. One said he was held for nearly a month for having a name similar to a wanted man, and another because of Facebook posts critical of the PYD. Amnesty International said Kurdish authorities had at times "used the counterterrorism law to detain and prosecute Kurdish opposition groups critical of the PYD."

Diana Semaan, who interviewed the detainees for Amnesty International, acknowledged that the autonomous administration welcomes outside scrutiny. “They are very open to Western humanitarian groups, civil society and governments and they seek and welcome advice and recommendations, but that doesn’t always mean that they agree with everything we report on,” Semaan told Al-Monitor in a Skype interview. “But it is clear that they are doing their best to improve, and during our interviews with prisoners there was no mention of torture,” she said.

A Syrian Kurdish official from the town of Qamishli told Al-Monitor that it was natural for his administration to publicly rebuff Amnesty International’s claims. "We aren’t murdering, raping, enslaving, as [IS does]," he told Al-Monitor in a Skype interview. The official, who declined to be identified by name, added that the fact that the Syrian Kurds are being held up to international standards of behavior is proof that they are taken seriously as a governing body. "And that is exactly what we want," he concluded.