Despite much-publicized attacks on soccer fields, experts insist that the number of such incidents has actually diminished to the point that more women and children are attending matches. 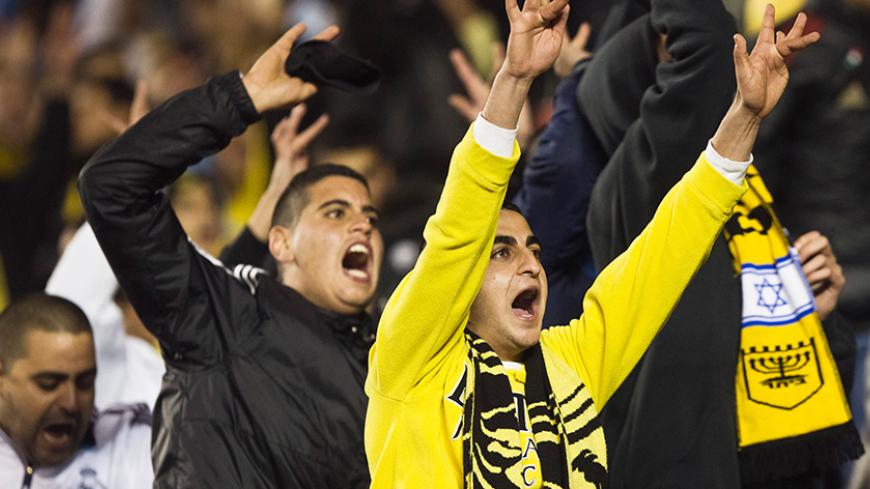 Fans of Beitar Jerusalem chant during a match against Bnei Sakhnin as part of the Israeli Premier League, at Teddy Stadium in Jerusalem, Feb. 10, 2013. - REUTERS/Nir Elias

The journalist Adi Rubinstein published a particularly pessimistic Facebook posting on Oct. 3. “The sports arena has always served as a fairly accurate indicator of the direction taken by society in general, and it is true in particular of the soccer field,” he argued. “What has been happening in Israel since the beginning of the current [Jewish calendar] year is reminiscent, more than anything else, of the goings-on in Yugoslavia in the mid-1990s. That's exactly how it started [then]. How did it end? Well, we all know.”

With his bleak and discouraging assessment, Rubinstein gives voice to many who see the behavior of Israeli soccer fans as emblematic of the moral decline of Israeli society at large. The impression is that the behavior of soccer fans is becoming ever more extreme, and indeed, the racist and violent incidents in which they are involved are not uncommon. This impression was strengthened following the shocking incident Oct. 3, when a fan of Hapoel Tel Aviv was seriously wounded in a brutal attack with a hammer. The suspects are affiliated with the Beitar Jerusalem soccer team's fan club.

The fans of Beitar Jerusalem have a questionable reputation, particularly those associated with La Familia, a hardcore group of them. They are widely considered to be violent and racist. For instance, they oppose signing Arab players to the team, and they are notorious for their anti-Arab chants. It was reported Oct. 9 that La Familia fans had joined forces with members of the radical far-right group Lehava in trying to find Arabs to assault in retaliation for the recent wave of terror attacks. Minister of Public Security Gilad Erdan said that he is considering steps to outlaw both organizations.

About a year and a half ago, a group of Beitar Jerusalem fans, fed up with the violent and racist actions of some of the team's supporters, established a new fan club, Beitar Nordia Jerusalem. Noam Bitton, one of its founders, described La Familia as “probably the most extreme, but definitely not the only one of its kind.” He remarked to Al-Monitor, “Similar phenomena may be seen in Hapoel Tel Aviv and Maccabi Tel Aviv soccer clubs."

Bitton agrees with Rubinstein's assessment. “Soccer fields have become an arena where all restraints are loosened. In a large group, one has an illusion of strength and immunity. What has been going on at [Beitar Jerusalem's] Teddy Stadium in recent years is pure hooliganism, which has turned out to be the key characteristic of the club. I believe these phenomena go hand in hand with the geopolitical situation in Israel, and they portend extremism, violence and racism in society in general. Catcalls heard at first in the soccer field are eventually replicated in a matter of five years or so in demonstrations, and in 10 years they are nonchalantly used in common discourse.”

Guy Israeli, a La Familia member, disagrees. “Soccer doesn't turn anyone into a violent person,” he told Al-Monitor. “A violent person would act violently both in the stands and outside the arena. True, soccer brings out emotions, and calling out and encouraging the team is an indispensable part of the game. People who are not true soccer aficionados translate it into violence. However, every day you hear of murders here, in Israel. Young people stab each other in discotheques, but no one is saying that discos mirror the deterioration of society. A soccer field is a place to unwind and release pent-up emotions, without violence. It is a popular place where folks gather.”

Yet Israeli agrees with Bitton on one point: The state of Israel has become more violent. “The stands have never been a pure place,” Bitton said. “But in the past, this was not the essence of things. In recent years, things have changed, tending in that direction. 'Death to the Arabs' and similar calls, or derisive jeering directed at black players, have become the norm. At one time, anyone who acted like this would have been silenced right away. These days, those trying to quell it are a rarity. Previously marginal trends have become the mainstream.”

According to Israeli, “It's a matter of letting off steam. At present, there are restrictions on anything and everything. You mustn't swear, and you shouldn't smoke in the pub. There is a long list of bans and prohibitions. You are limited wherever you go. And the rage builds up inside you until it finally explodes.”

Yair Galily, an applied sociologist who has studied violence in sports, believes that sports arenas are indicative of the future that awaits societies. He also thinks, however, that it is actually a positive sign. “What happens in sports foretells future social processes,” he told Al-Monitor. “That's because undercurrent processes or those that cannot be readily identified are expressed in stadiums in full force. Social phenomena are reflected in sports, and at the same time, the sports arena serves as a catalyst for social processes. This was evidenced in Spain, in the battle between Catalonia and Castile. The same is true of the issue of soccer games on Saturday [the Sabbath], which has stirred quite an uproar in Israel lately. It shows that the issue of the Sabbath is going to occupy center stage in the public discourse in the days to come.”

According to Galily, judging by the behavior of soccer fans, Israeli society is trending toward less violence. “I am a scientist,” he explained, “and according to the data, there is a steady decline in violence and racism in sports. These days, every incident reverberates in the media and the social networks, but there are fewer incidents than in the past. The level of violence has dropped significantly, and one of the best indications of this is the increase in the number of women and children who come to cheer on the players. Soccer is a family event, and as such, it entails commonly accepted norms of behavior.”

Galily's words are echoed by Gal Karpel, coordinator of Kick Racism Out of Israeli Football, a program sponsored by the New Israel Fund. The program periodically publishes findings on racism and violence in Israeli sports.

“What's happening on the [playing] fields is linked to what's happening in society. The sports arena can legitimize things, so that they become acceptable in society. Still, it can happen in both the positive and negative direction,” Karpel told Al-Monitor. “The number of Arab players in the Premier League of Israeli soccer is proportionate to their percentage in the population. There are Arab players on all local soccer teams, with the exception of Beitar Jerusalem. Even the Israeli national soccer team has Arab players. Most fans steer clear of racism.”

Karpel emphasized, “By and large, it isn't that society becomes more violent due to the norms set on the field. Rather, it's the other way around. If there is anything that soccer promotes, it is acceptance [of the other] and equality.”

Bitton concurred, stating, “We are witnessing countertrends as well, where fans are unwilling to put up with violence and racism and taking their fate into their own hands, setting up a new fan club. We may yet see its bearing on society in a few years — social responsibility that has its roots in and is nurtured by sports.”

If Karpel and Galily are correct in their forecasts, and in light of Bitton's last comment, then the direction society is headed in is definitely positive, far more so than that implied by the generally pessimistic public discourse in Israel and the prophecy of doom voiced by Rubinstein and others.