From its new international stage in Syria, Russia is examining its options to determine which could bring it closest to securing a place as a political powerhouse. 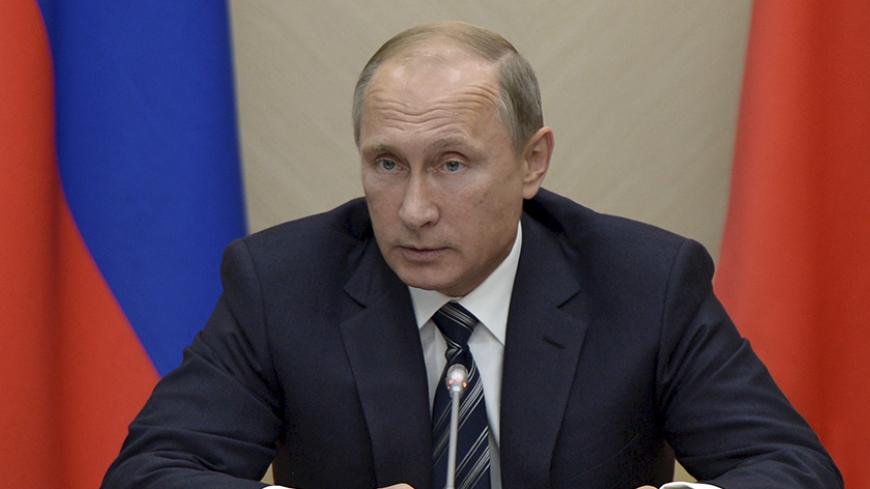 Russian President Vladimir Putin chairs a meeting with members of the government at the Novo-Ogaryovo state residence outside Moscow, Russia, Sept. 30, 2015. Putin said the only way to fight terrorists in Syria was to act pre-emptively, stating that Russia's military involvement in the Middle East would only involve its air force and only be temporary. - REUTERS/Alexei Nikolsky

There is perhaps no issue more important, yet less understood, in current international affairs than Russia’s military campaign in Syria. In recent weeks, Moscow’s swift intervention into the region’s messiest conflict has raised all sorts of concerns and speculation. The issues range from possible motives for Putin’s decision and the implications of Russia’s posturing, to what it all might mean for regional security and crippled US-Russia relations.

Indeed, Moscow has moved so quickly, so decisively and so — again — clandestinely that even long-time observers of Russian policy toward Syria were left puzzled. Within a couple of days, Putin went from his UN speech and proposal for cooperation with the United States in tackling the Islamic State (IS) to airstrikes.

To make matters even worse for Western leaders, Iraqi Shiite lawmakers and militia leaders recently urged the government there to allow the Russian air force to carry out airstrikes on IS positions in Iraq. Such a request, as traumatizing as it may be for Washington, reflects two larger issues.

First, many regional governments, Sunni and Shiite alike, appear uncertain that America can provide adequate security. Some observers are skeptical that the US-led campaign will achieve any real success.

The second issue is a call for a strong power broker that can, if needed, use targeted yet decisive force. Russia discerned this desire and has been setting the stage to take advantage of it by building up its military presence and launching a diplomatic offensive. A mixture of both legitimate national interests and tactical motives has driven the Russian campaign in Syria.

As an external power, Russia needs regional partners to master its own Islamist challenges in the Caucasus, the Volga region and the Urals, to name a few. Thus, Moscow is in constant pursuit of a balance between a pragmatic foreign policy in the Middle East and its own domestic problems in this regard. Those who believe Russia concocted this narrative as an excuse for intervention must be either dissembling what they know to be true or not well versed on the subject. To be fair, however, Russian officials do occasionally stretch this scenario to turn what might be perceived as a challenge into a “daunting immediate security threat.”

At the regional level, Moscow seeks strongholds in geopolitics, energy deals and arms contracts, which could boost the country’s economy and help it fill in certain market and political niches. Most importantly, Moscow also seeks a coherent structure in the Middle East that would let it cope with its own internal challenges and prevent those problems from slipping into the outside, including Central Asia. That part of Russia’s “southern underbelly” is rarely regarded in the security debate over Syria, but a potential “export of instability” to that region, amid uncertainties about Afghanistan, has long raised severe concerns with Russian decision-makers.

At the global level, Russia’s engagement in the Middle East also reflects its push to secure its status as a world power in politics. It is hard to calculate how much that goal drives its actions, but oblique signs of it can be seen in Moscow’s Syria campaign. Whether such status would be a blessing or a curse is debatable even within Russia, but the need to achieve it is not up for debate in the Kremlin, which is positive it has enough power, ability and will to be seen as an indispensable superpower.

In certain situations, Moscow is hindering implementation of its own strategy because of its desire to upset Western policies that hurt what the Kremlin considers its strategic regional assets.

If the interests shape Moscow’s objectives in the campaign, the improvised motives dictate the very behavior patterns and define Russia’s policies in Syria to a palpable degree.

Many of Russia’s initiatives are meant to send certain signals to the United States. The Kremlin believes that although the White House considers Russian actions to be not quite amenable and “deprived of strategic depth,” America’s own plan for Syria offers no clear strategic vision for the country and the region whatsoever. And the tactical options the United States considers are fraught with even bigger risks.

Russia’s campaign in Syria displays both EU and Ukraine elements, as Moscow has long sought to break the ice of high-level communication with Europeans. There’s little real evidence that Syria is a bargaining chip for Ukraine in Russia’s relations with the West, but Moscow aspires to lessen the confrontation with Brussels and make adoption of further sanctions difficult. This also gives the Kremlin leverage in EU policies, albeit it short term.

Finally, as a politician Putin cares about his domestic standing. Attempts to make the most of foreign policy maneuvers to boost his popularity at home are natural for a leader, especially one who believes the entire system hinges on him.

It is hard to tell which of the above-mentioned motivations are prevailing. Russian leadership will most likely be driven by whichever imperative best helps it explain — some would say justify — its policies at a given time.

The Kremlin understands the risks of its campaign. The dangers of a head-on collision with the United States, complications with the Gulf monarchies and Turkey, as well as stepping into an Afghan-type quagmire or finding itself in the midst of a Sunni-Shiite standoff are all on the Kremlin’s list. Nevertheless, it ranks the first as a low probability, views the second as reparable, believes the third is avoidable and considers the fourth inaccurate and exaggerated.

As is well known, with great leadership comes great responsibility. Now that all eyes are on Russia, any action Moscow takes will be scrutinized closely. Even the tiniest faux pas will be magnified and examined under a critical lens. Nevertheless, the Kremlin sees the potential gains on the other side of the equation as lucrative and worth the fight. As a popular Russian motto goes, “Winners can’t be judged!” History teaches — and Moscow is well aware of it — that even if the winners are judged in the end, it is still they who decide the future state of affairs.

Now that the stage has been set for the Syrian army and lines of communication and logistics have been cleaned up, Moscow is prepping for the second round. It will continue to invest its share of military support and, quite importantly, diplomatic activity to support the upcoming ground mission. In this context, a question emerges: Will Russia switch to a new tactic with its own interpretation of “leadership from behind” or continue its upfront run “against the mainstream”? In any case, once you apply for a leadership position in international politics, you get reviewed and maybe even graded. The real test is coming.