Four years after Gadhafi, is Libya better off?

Libya drifts dangerously to the point of no return as Islamic militants terrorize civilians and two rival governments battle it out. 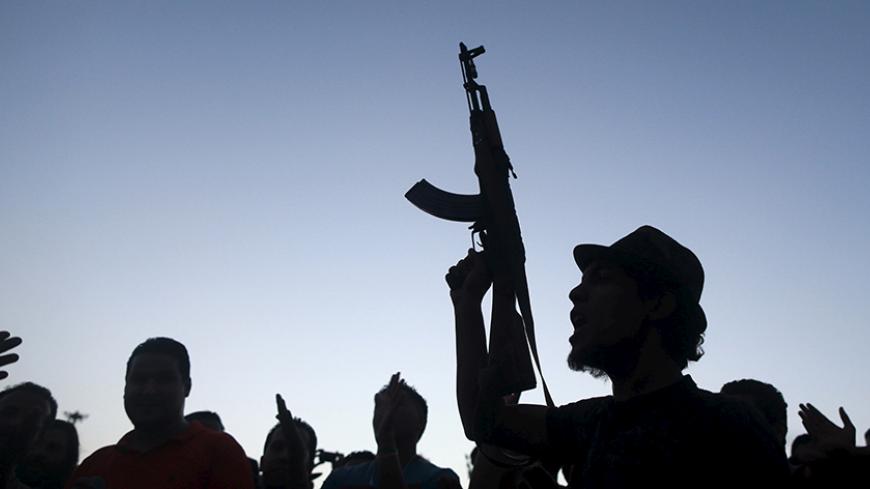 People take part in a protest against candidates for a national unity government proposed by UN envoy for Libya Bernardino Leon, in Benghazi, Libya, Oct. 9, 2015. The United Nations proposed a national unity government to Libya's warring factions on Oct. 8 to end their conflict, but the deal faces resistance from Tripoli's self-declared rulers and hard-liners on the ground. - REUTERS/Esam Omran Al-Fetori

This Oct. 20, will mark four years since the late Libyan leader Moammar Gadhafi died in still mysterious circumstances as his convoy was leaving his hometown of Sirte in central Libya while NATO-backed rebels closed in. There is no reliable account of how or why he died, but Human Rights Watch (HRW) believes that his convoy was first bombed by a NATO airplane, forcing him and about 250 of his most loyal companions to seek shelter. An amateur video showed a wounded Gadhafi alive while being loaded into a pickup truck to be taken to Misrata some 250 kilometers (155 miles) northwest of Sirte, and later he was announced dead.

Libyan authorities never fully investigated this crime despite promises to do so, and no official account of what really happened was ever published. The rebel credited with Gadhafi’s capture, Omran Bin Shaaban, died under unclear circumstances while receiving treatment in France in 2012.

Gadhafi’s death will go down as a landmark, and certainly as a bad one. It hardly represents any of the ideals aspired to by a nation that had just emerged from violence and war on the heels of the Libyan revolution, which was supposed to bring back justice and the rule of law, among other hopes. This all leads to a simple question: Is Libya better without Gadhafi?

Most Libyans would like to have seen him tried before a court of law and be made to answer many questions only he could have answered. After all, Gadhafi ruled for over four decades. But even more Libyans today, including middle-rank former rebel leaders, think he was killed for the very reason he should have been tried: so that he wouldn't be given an opportunity to talk.

Hassan, a former rebel leader who does not wish to use his real name fearing reprisals, told Al-Monitor that “Gadhafi’s death is certainly not what we wanted, but I believe local and foreign politicians wanted him dead because the man knows too much.” Having him talk could have created a serious political embarrassment for many regional and world leaders.

When asked about the situation in his country today, Hassan said, “It is not promising, and many of us [former rebels] regret what happened because we never expected it to be this bad.” Without a doubt, Libya today is a fractured country without any central government. Instead, it has two quarreling governments — one in Tripoli recognized by no other state, and another in the city of El Bayada, which enjoys useless international recognition. At the same time, different terror groups are making gains in Libya. The most dangerous of them is the Islamic State (IS), which has so far expanded into three cities: Derna in the east, Sirte in the middle and Subratha in the west.

So many Libyans share such beliefs nowadays, as they compare their country and indeed their lives today to how they were under Gadhafi’s rule.

Less than two weeks ago, IS launched its most daring attack in Libya on a prison compound at Mitiga air base, a secure location in Tripoli. At the same time, various militias still operate outside any government control with the judiciary hardly functioning. Arbitrary arrests, kidnappings, and murders still occur, albeit on a lesser scale than three years ago. Sporadic gunfire, roadblocks and power shortages have become routine.

Benghazi, the second major city in Libya where the revolution started in February 2011, has been almost completely destroyed in the ongoing war between the Libyan army of the internationally recognized government, based in El Bayada, and different Islamist factions concentrating mainly near the seafront north of the city. The capital city of Tripoli is under the control of a government recognized by no other state; it was established after a bloody war that ended with the destruction of the airport and the capture of the city in August 2014 that forced the internationally recognized government to flee to eastern Libya.

Compared to a year ago, life for ordinary Libyans in the capital might have improved a little, but it is still far from normal — and normal here is in comparison to what it used to be under Gadhafi. People still lack security and struggle to make ends meet, with skyrocketing prices and little subsidized basic food available. Basic medical services are almost nonexistent, forcing people to seek treatment in neighboring Tunisia. Those with financial means seeking to go to Europe for whatever reason find it even harder, since all Western embassies have long since closed; to apply for a visa, any Libyan citizen must travel to Tunis, Tunisia.

Oil production, the main source of government revenue, is down by three quarters, and the country now pumps less than half a million barrels a day, denying the treasury much-needed cash to pay the thousands of civil servants on its payroll. Government salaries are at least three months behind payment schedule. All major infrastructure projects that were in progress when the unrest started four years ago have been on hold since all major foreign companies left, leaving behind rusting building cranes dotting the Tripoli skyline. Thousands of Libyans are still displaced inside the country, with an estimated 1 million citizens forced to seek security abroad — particularly in Egypt and Tunisia.

Most schools and universities have yet to open their doors for this academic year, and schoolchildren are spending most of their time outdoors playing in unsafe streets.

Meanwhile, political factions continue to quarrel about the shape of the next government in endless UN-led talks that recently ended in Skhirat, Morocco. People are less hopeful that their country can be saved anytime soon. Hassan believes that “such talks will never deliver anything to the country,” admitting that “life under Gadhafi was much better than it is now.”