The danger of Iraq's informants

Thousands of Iraqis were arrested based on information provided by informants and turned out to be innocent, thus raising questions about Iraq’s judiciary system and human rights policies. 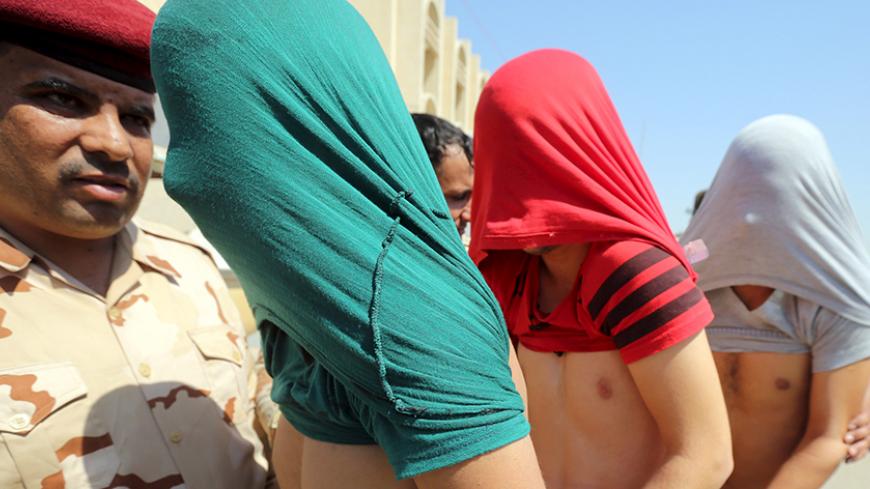 BAGHDAD — Thaer al-Obeidi, who resides in the Baiji district in Salahuddin province in northern Iraq, was arrested by the Iraqi government forces, because he shares the same name as someone who is wanted by the authorities. Obeidi, who was released in May 2009, spent 19 months in several detention centers within and outside the province since his arrest in October 2007.

It took the security forces five months following his arrest to interrogate him, and he was incarcerated the entire time. He then waited for more than a year before appearing before the court, which decided to set him free because of a lack of evidence.

Just like Obeidi, tens of thousands of Iraqis have been arrested by the country's security forces for having similar names as those wanted or based on information provided by an informant. The latter has been a controversial issue, as they often provide false information, according to a statement by the Higher Judicial Council of Iraq on Nov. 24, 2014, after it revealed that 498 informants in Baghdad alone have been referred to the judiciary for providing false information.

The amended Iraqi Criminal Procedure Code of 1971 states, "If the complaint is in regard to offences against the internal or external security of the state, crimes of economic sabotage and other crimes punishable by death, life imprisonment or temporary imprisonment, and the informant asks to remain anonymous and not to be a witness, the judge has to register this with the notification in a special record prepared for this purpose and conduct the investigation according to the rules, considering the information included in the notification without mentioning the informant’s identity in the investigative paper.” Thus, the informant’s work is not bound to Iraqi security institutions, although the informant does receive a reward in return for the information he gives.

The Iraqi Cabinet decided on March 26, 2013, to cancel the job of informant, and stressed that it “has caused harm to innocent Iraqis.”

A source from the Higher Judicial Council of Iraq told Al-Monitor on condition of anonymity, “From Jan. 1 to Aug. 31, the judicial authorities released 68,081 detainees during the investigation and prosecution phases, under judicial decisions. They were all arrested on charges that they were innocent because of inaccurate information provided by informants.”

On Dec. 30, 2014, Medhat al-Mahmoud, head of the Higher Judicial Council of Iraq, said, “Actions are no longer taken based on [information provided by] informants, whose words have become a mere notice for the examination of the case.”

Bushra al-Obeidi (not related to Thaer), a member of the Independent High Commission for Human Rights of Iraq, attributed the release of tens of thousands of detainees from Iraqi prisons without being convicted to “the security services’ dependency on informants, who were a reason behind these people being placed behind bars and who have not been proved guilty of the charges.”

She told Al-Monitor, “Some inmates have been subjected to beatings and abuse, which is contrary to national and international human rights laws. This is because those investigating the detainees do not know how to deal with the inmates. They should undergo an intensive course on human rights and training on how to deal in a humane way with the defendants.”

Hajji Qandour al-Sheikh, a member of the Iraqi parliament's Human Rights Committee, told Al-Monitor that he “made a visit to the Muthanna Airport Prison, which is located in northern Baghdad, along with other members of the committee earlier this month.” He said that he had met “with the prisoners there and found out that most of them have not been tried yet, although it has been more than a year since they were arrested.”

He added, “The parliamentary Human Rights Committee has formed a committee to draft a report that will be submitted to the parliament, to examine the cases [where prisoners have been detained] for more than one year without being tried, and that the committee will meet with officials in the judiciary to speed up the trials.”

Sheikh said he agreed with “what Obeidi said on the informants’ work, which has thousands detained in Iraqi prisons without being guilty.”

International law expert Ali al-Tamimi told Al-Monitor, “All over the world, if an innocent person is arrested for more than a few minutes, he will be compensated morally and financially in case he was harmed. In Iraq, however, the arrest lasts for years before [the detainee] is released without being compensated, despite losing his job and his reputation, and being morally prejudiced.”

Tamimi said, “Iraq acted in accordance with the reinstatement law, which was abolished under Saddam Hussein's rule. There is also the bill on the right of the innocent that is made up of eight articles, which has not been approved yet. This is why Iraq has suffered from a legal vacuum, although the legal rule says that there is no punishment and there is a crime without a law.”

He added, "It is useless for an innocent detainee to file a lawsuit against the Iraqi authorities. Yet internationally one can inform human right organizations through which justice can be achieved."

Iraq is in need of genuine legislation that guarantees the rights of detainees who have not been proven guilty, while those investigating the detainees need to be educated about international human rights laws and covenants. Furthermore, human rights organizations should get involved and be allowed to visit detention centers in Iraq.