Islamic Jihad committed to truce … as long as Israel is

In an interview with Al-Monitor, Islamic Jihad political bureau member Nafez Azzam said his movement does not condone the firing of rockets from Gaza and that Hamas and Fatah must end their internal division to spare Palestinians more suffering. 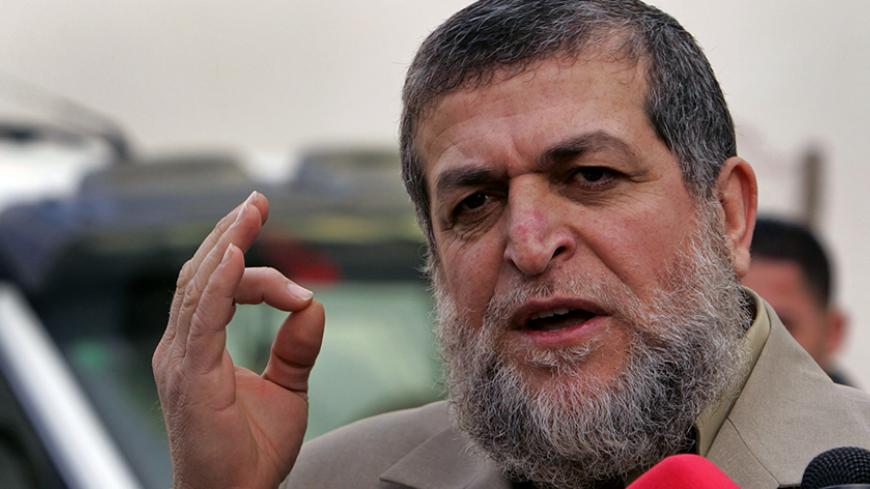 Islamic Jihad leader Nafez Azzam talks to the media after his meeting with Hamas in Gaza, Feb. 20, 2006. - REUTERS/Mohammed Salem

RAFAH, Gaza Strip — The Islamic Jihad played a key role and was an essential partner for Hamas in the Israeli war on Gaza in summer 2014. It also took part in the indirect Israeli-Palestinian talks in Cairo that resulted in a truce agreement Aug. 26. It now seems, however, that in regard to negotiations with Israel, the group's partnership with Hamas has ended. On Oct. 4, Al-Monitor met with Nafez Azzam, a member of the Islamic Jihad’s political bureau, who spoke about the movement’s position on negotiations, intermittent military escalations between Gaza and Israel and his group's relations with Arab and regional parties.

Al-Monitor:  The war between you and Israel ended over a year ago, after the signing of an open truce agreement, but we witness some escalation at times. What is on the horizon now? Will the truce continue or will it end soon?

Azzam:  We had approved an agreement at the end of the war over a year ago, and it still stands. We will keep abiding by it as long as Israel does the same. In this critical stage, we do not believe war would be in our interest for several reasons, first of which is that the devastating repercussions of the previous war have not been rectified or recovered from yet. In addition, the regional and international situation does not serve us.

Al-Monitor:  As a resistance movement, are there direct or indirect negotiations between you and Israel?

Azzam:  The negotiations took place during the war under Egyptian sponsorship. We only met with Egyptians, who would then meet with the Israelis. For the Islamic Jihad movement, there are no current direct or indirect negotiations between us and Israel.

Al-Monitor:  Is there no plan to resume the negotiations from the 2014 war that were scheduled after the signing of the truce?

Azzam:  [Negotiations] were supposed to take place, but the Egyptians put forward points of view and justifications to stop the talks related to the current conditions in Egypt, which we understood. However, we wish they would communicate with Israel again and pressure it to stop the various forms of aggression it is practicing, specifically in the West Bank and Jerusalem.

Al-Monitor:  Is there any international action regarding the Israeli soldiers captured by the Palestinian factions or any files related to the truce or escalation? Is the Islamic Jihad being informed of the results of any actions?

Azzam:  The truth is, we do not have new information, and we are not part of these meetings. Sometimes, when we meet with Hamas, it talks about such matters, but only in general. Other than that, we do not have any knowledge or details regarding those negotiations.

There is no doubt, however, that we should be included and involved in discussions about any step related to the future of the Palestinian cause and the living conditions of the Palestinian people. But we are not part of the ongoing negotiations between Hamas, the European Union and the representatives of the Quartet or other parties.

Al-Monitor:  Since you were part of the decision on war and peace, are you Hamas’ partner in any decision related to the continuation of the truce or anything else?

Azzam:  We are certainly a key party in the entire political process and in everything that happens, both in the West Bank and the Gaza Strip, in the sense that there is communication between us and the Palestinian Authority as well as between us and Hamas and other factions. This is why I do not think that any one [person or group] can exclusively make a decision regarding the future of the Palestinian cause or the interests of the Palestinian people.

Al-Monitor:  What are your demands regarding lifting the Israeli siege on Gaza?

Azzam:  The siege does not concern a specific Palestinian faction, as all Palestinians suffer from it. The people have made a lot of sacrifices, and they should not continue to suffer the way they are now. It is necessary to lift the blockade in all its forms; there must be freedom of travel, economy, trade, health care. Thus, lifting the siege cannot be used as a condition for concessions offered by the Palestinians. The siege must be lifted without restrictions or conditions, as it is illogical, illegal and inhumane.

Al-Monitor:  How is your relationship with Iran today? Is it still providing financial support to the Islamic Jihad?

Azzam:  We prefer not to talk about such topics or about our relations with our friends and allies or with any parties related to the Palestinian issue.

Al-Monitor:  ​The border with Egypt [the Rafah crossing] is partially closed, and the Israeli siege is tight. How do you see the situation in Gaza in particular and in Palestine in general?

Azzam:  ​The situation is obviously disastrous. There is great suffering as a result of the occupation and its policies. Citizens are also suffering because of the internal conflict and bickering, which increases the burden imposed on the Palestinians in general and the people of Gaza in particular. We, along with the Egyptians and other parties, are seeking to ameliorate this atmosphere and alleviate the people’s suffering, and all Arab and Islamic parties should do the same. In addition, both parties of the internal division [Fatah and Hamas] are supposed to be taking steps to spare our people more suffering and pain.

The crisis living situation in Gaza is never-ending, and our people in the West Bank are also suffering. The main reason for all this is the Israeli occupation, but there are other reasons related to our internal differences, and this is in our hands. We must put an end to it by fixing our internal issues to spare the people more suffering.