A US senator created the American Committee for Tyre 35 years ago, and now former Hill staffers are bringing it back to life. 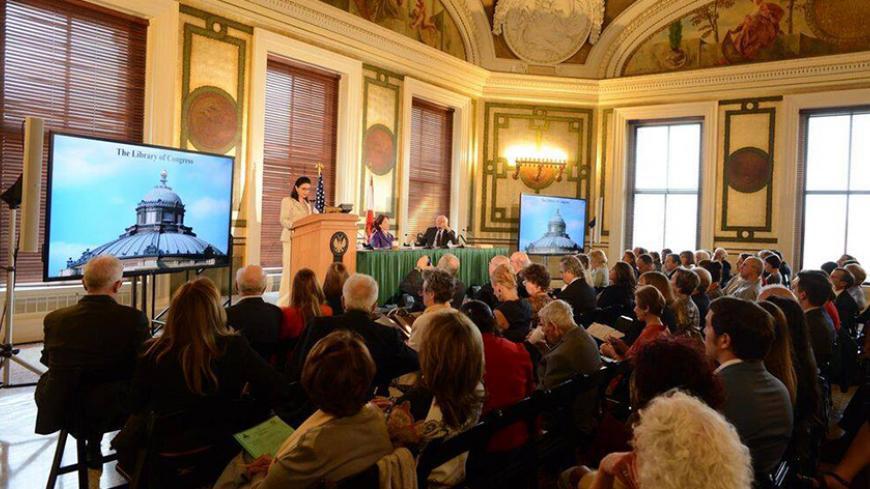 A symposium dedicated to Tyre Day was hosted at the Library of Congress on June 3, 2015, in Washington, Aug. 28, 2015. - FACEBOOK/AIST Tyre Foundation- UNESCO Partners

For a brief moment this spring, Washington became the de facto capital of the long-lost Phoenician civilization.

A who’s who of DC power-players — current and former lawmakers, ambassadors and former administration officials — gathered at the Library of Congress on June 3 along with some 50 guests from around the world to celebrate Tyre Day. They were there to breathe new life into efforts to save the historic Lebanese port city — and to commemorate the late Sen. Claiborne Pell, who helped birth the US movement 35 years ago.

“[Pell] was a statesman in every sense of the word — an intellectual, an internationalist,” said Jay Ghazal, a Lebanese-American board member on the American Committee for Tyre and a former aide to the long-serving Rhode Island Democrat. “He cared deeply about a lot of issues, including cultural and historic preservation internationally.”

That passion found a home in Tyre, home of a great civilization that mastered maritime trade and gave the world the phonetic alphabet. The port city was added to the UN's World Heritage List in 1984.

“The contributions the Phoenicians made to civilization are extraordinary,” said Randa Fahmy, the executive director of the US committee. “And it all started in Tyre.”

Pell is well-known for his advocacy of the US education grants that bear his name and for sponsoring federal endowments for the arts and humanities. But he was also the driving force behind the creation of the American Committee for Tyre in 1980.

The US nonprofit was one of the first foreign branches of the International Association to Save Tyre, the love child of Tyre native Maha El-Khalil Chalabi, who has fought tirelessly since the advent of the Lebanese civil war to protect the city and its historic sites. The Lebanese association was accredited by UNESCO in 1984 and now has branches in 13 other countries.

Under the leadership of Pell and Lebanese-American Sen. Spencer Abraham, R-Mich., Congress brought attention to the threats posed by the war and, later, by recurring proposals to build a highway through the city’s ancient ruins. Such destructive development bids appear to be on hold, at least for now.

For several years — and particularly since Pell’s passing in 2009 — the US committee had become less active. The Islamic State’s (IS) rampage through Iraq and Syria, particularly in Palmyra, however, has rekindled global interest in historic preservation, especially with regard to Lebanon.

“From the broader geopolitical perspective, we actually got quite a bit of attention for our event in June because of what [IS] is doing,” said Fahmy, who was a Capitol Hill aide to Abraham. “There were a lot of questions during our seminar about that very issue: What are you doing to protect it? How do you know that [IS] isn’t going to go and move on it?”

She’s hoping the success of the June 3 symposium will garner more interest — and money — for the committee’s priorities. These include establishing a women’s handicraft center in the style of Tyre to create jobs and preserve Phoenician techniques, researching the Murex seashell that ancient Phoenicians used to create the dye that made them known as the “traders in purple” and creating a virtual library of Phoenician artifacts from all over the world in collaboration with the American University of Beirut.

“We hope to continue our efforts with an ongoing speaker series about Phoenician history … not just in Lebanon but also in Tunisia, Greece and other parts of the Mediterranean,” Fahmy said. “The ultimate project would be to excavate everything underneath Tyre. Probably three-quarters hasn’t been excavated; it’s all underground.”

Over the past couple of years, Fahmy has helped breathe new life into the committee.

It now has a new chairman: Obama’s former US representative to UNESCO David Killion, now the senior staffer for the bicameral US Helsinki Commission. The committee also has a new board, whose honorary chairs include the Lebanese-American Charles Boustany, R-La., and President Jimmy Carter’s ambassador to the UN, Esther Coopersmith.

“Tyre was regarded as the greatest maritime trading civilization in the world,” Boustany said in remarks in his role as honorary chairman of Tyre Day. “The Phoenician civilization was quite amazing, and it was settled upon Tyre.”

Coopersmith and Pell received recognition awards at the June 3 event for their “pioneering roles” in the founding of the US committee. The late senator was represented by his grandson, Clay Pell, a lawyer with his own political ambitions in Rhode Island.

“He really valued the antiquities,” Pell said of his grandfather. “He thought that not only was it important to study them, but he really believed strongly that how we treated them — and cultural institutions more broadly — reflect the type of country that the United States was and the type of civilization that his generation or the next generation would represent.”

Pell urged lawmakers in Congress today to help Americans see the Middle East through a wider lens than the focus on strife and conflict that dominates the news. That would help create new bridges with that part of the world, he said, and honor his grandfather’s legacy.

“What Congress can do is talk about the Middle East not only as a place of challenge, but also of promise,” Pell said. “The promise of a site like Tyre is not only the protection of those historic remnants and artifacts — that’s important — but really the larger value is for the future.”