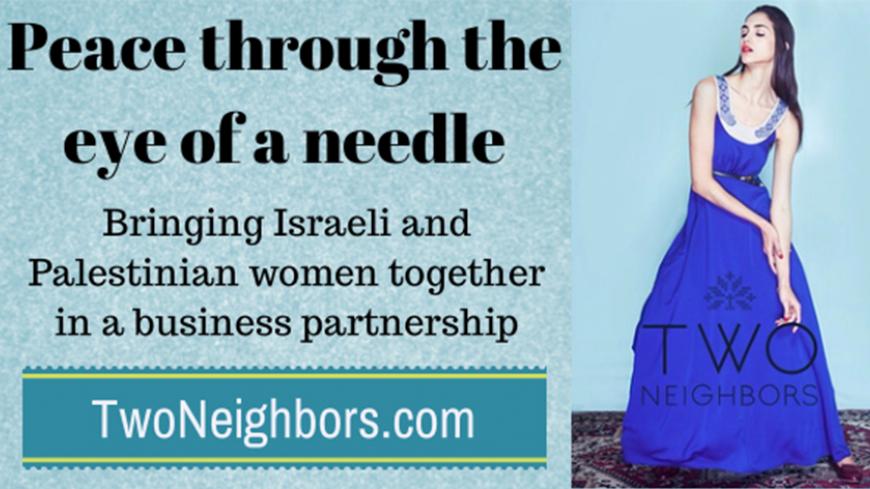 Two Neighbors debuts its summer collection, using the motto "Peace through the eye of a needle," Feb. 3, 2014. - FACEBOOK/Two Neighbors

“So many things motivated me to look for ways to bring people closer together, but I never thought I’d be an entrepreneur in a women’s fashion project,” Whit Jones, a clinical psychologist from Idaho, tells Al-Monitor with a smile. Throughout his professional career and along with volunteer work in the United States, Jones has been striving to bring together people in conflict zones. His aspiration gave birth to a fashion label called "Two Neighbors" that brings together Israeli and Palestinian women who jointly design unique dresses.

“I’ve always been involved in charity work and wanted to know what goes on in bloody conflict zones,” says Jones. “I remember as an American kid growing up, the anxiety and horror of China. Today I can say that my grandson no longer sees the Chinese as a threat, but as business partners. That’s where I got the idea, that by getting involved in productive business ventures, people can overcome everything, including psychological obstacles.”

Jones first came to Israel more than 10 years ago, after meeting two young people — an Israeli and a Palestinian — at a leadership seminar in the United States. He heard from them about the pain and despair of the conflict. The Palestinian had been imprisoned in an Israeli jail; the young Israeli man had been shot twice by Palestinians. These encounters led to the creation of The Center for Emerging Futures.

“At the initial encounters that I conducted between the Israelis and Palestinians, it seemed that each side wanted to prove that the other was to blame for the conflict. I said to them, ‘Excuse me, this is not our goal. We came here to get acquainted.’ After that we started talking about joint business ventures, and it was amazing how each one had some idea that he had thought about and wanted to present to all the others.”

Jones comes to Israel and the West Bank twice a year. He makes sure to hold the encounters on tightening Israeli-Palestinian ties in the Palestinian town of Beit Jala, near Jerusalem. One of the meetings was attended by Sigal Kirsch, an Israeli math teacher who had never imagined she would head up a fashion label, either.

“Whit met a group of Palestinian women from the South Hebron Hills who sew embroidery and he very much wanted to help them,” Kirsch tells Al-Monitor. “At first it wasn’t clear how the embroidery could be turned into a business project, but it was immediately clear that the Palestinian women’s unique talents lay in embroidery and that would have to be the basis. At first neither they nor we knew what lay ahead. And then came the idea to create fashion. We enlisted Israeli seamstresses, we enlisted fashion designer Miriam Givon and we started working.”

The idea was simple: to establish a Tel Aviv-South Hebron Hills fashion line that would jointly turn out a high quality product and sell it all over the world. And this is how it worked: Givon designed; the material was cut in Israel and sent to the South Hebron Hills, where the Palestinian women embroidered the cut material. The embroidered material was then sent back to Tel Aviv for sewing. The finished products were high quality dresses in various styles featuring the glorious needlepoint work of the village women.

With virtually no advertising budget, without supermodels, but with a lot of faith in the project and wonderful designs, the label’s reputation has spread by word of mouth.

“We didn’t want to go the route of an Israeli firm employing Palestinians,” Kirsch emphasizes. “We meet twice a week in Beit Jala; we conduct Skype calls with Whit in Idaho once a week. All decisions are made jointly, from the design level through to the marketing and operations and future growth.”

But the cooperation between the Israelis and the Palestinians is not so simple. Kippah, one of the Palestinian embroiderers, tells Al-Monitor that the Israeli-Palestinian project was initially viewed with great suspicion and animosity among many residents of her village and of adjacent villages. They did not at first understand how the embroiderers could think of hooking up with Israeli women.

“You must understand that we live among settlers and soldiers and experience clashes over lands and the course of the wall,” says Kippah. “We suffer daily. For many, friendships or working relationships with Israelis are far from taken for granted. When we started working, we were regarded as colluding with the enemy. But we explained to the opponents that not all Israelis are the same; not all Israelis are settlers. Our suffering is not their fault. It’s because of the Israeli government. Our business partners are well intentioned, and only thanks to our acquaintance with them will we be able to solve our problems. Now I can say that the opposition has lessened. People in the village understand and accept the fact that there are other types of Israelis too.”

And thus, just like Jones envisaged, the joint venture by Israeli and Palestinian women — embroidering, designing, sewing and selling together — has turned into true friendship.

“I went on a visit to Tel Aviv,” Kippah recounts with excitement. “We also went to Haifa and Jaffa. It was the first time we had left the village and seen something new that we had not known before. Both we and the Israelis are dreaming of growing and making an honorable living.”

“We are dreaming of a large production,” says Kirsch. “But right now, despite the compliments and the interest, we only market our dresses on the Internet. Advertising and construction of a production line for an aspiring fashion label is a major investment. I must admit that we have yet to reach financial independence and we need Whit’s support.”

They have been helped by Lebanese-French actress Laetitia Eido. While working on the movie “Dancing Arabs” and on the top-rated Israeli television series “Fauda,” Eido came across the unique dresses of Two Neighbors, was impressed and ordered a few for herself. She then volunteered to model them.

At the end of the interview, Al-Monitor asked Jones about his plans for the future. “I have two dreams,” he answers. “First, that the Two Neighbors project will turn into a successful business employing hundreds of women on each side. The second dream is that eventually we will be able to hand over ownership of the whole project to the women from each side.”